by Scott Teeters, Editor of Corvette Report
Sellers disappointed when reserves not met.

Dateline 11.23.15: The 1996 Grand Sport was the sixth Special Edition Corvette and did more to bring the moniker “Grand Sport” back into the consciousness of the Corvette community than anything else. Prior to 1996, it was mostly Corvette racing fans that knew what a “Grand Sport Corvette” really was – Zora Arkus-Duntov’s lightweight Cobra killer that he envisioned being offered in every Chevrolet dealership in America. It was a noble concept, but even Chevrolet General Manager Semon “Bunkie” Knudsen couldn’t get a special exemption from GM’s management to allow the Chevrolet build and sell Corvette race cars. (I know, it’s a bummer, man!)

As the original 1963 Grand Sport racers faded into the collective memory of motorsports, the legend turned into a myth, until slowly but surely, END_OF_DOCUMENT_TOKEN_TO_BE_REPLACED

Dateline: 9.26.15 – Barrett-Jackson knows how to put on a show. The roster for the 3 day auction fest in Vegas was packed with beauties… and the girls were nice too. But seriously folks, the car and truck eye candy was a treat and #001 2016 Special Edition C7.R Z06 Corvette was saved for later on the last day. With “first and last” cars becoming highly collectible in the Corvette community and with so many models and special editions having been produced, we’ll no doubt see many more of these.

Ever since 1999 when the first all-out, factory-backed, long-term Corvette racing team unleashed the C5-R, adding the suffix “R” after the generation designates “racer.” So far we have the C5-R, C6.R, and the current C7.R. END_OF_DOCUMENT_TOKEN_TO_BE_REPLACED

The 1978 Corvette Gets a Well-Deserved Major Refresh

Thirty-six years ago today Chevrolet released the new 1978 Corvette. Chevy’s sports car was selling well considering the times. Muscle cars were all but dead, gas prices were up to around 75-cents-a-gallon (GOSH!), and the economy was in a slump. However, the Corvette was getting a little stale-looking, so when the ’78 model was released, it was a “WOW!”

The new bubble fastback roof was sweet indeed. One of the shortcomings of the ’68 to ’77 Corvette coupes was a serious lack of rear stowage area. Unlike the ’63-to-’67 Sting Ray Coupe that had a fairly good size space behind the seats (for a sports car), the C3 coupes up to ’77 had a narrow slot tall enough for a suit case and not much more.The new roof design not only yielded more room in the back, it helped brighten up the refreshed interior and eliminate a serious rear-view blind spot. END_OF_DOCUMENT_TOKEN_TO_BE_REPLACED

Our New Partnership With FineArtAmerica.com 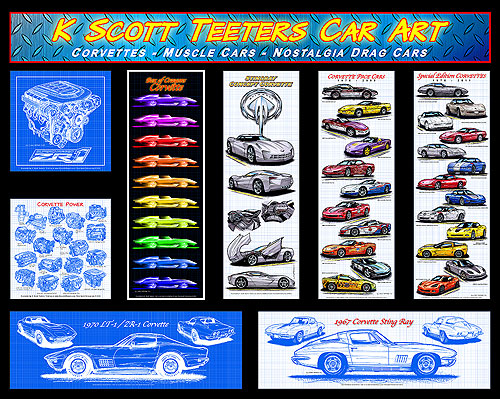 By offering our Corvette prints through FineArtAmerica.com, customers can order prints as small as 8” x 2-5/8” up to 48” x 16” for our 1×3 proportion layouts and 8” x 8” up to 48” x 48” for our square proportion layouts. Every print can be produced on either archival matte paper, photo paper, watercolor paper, or canvas. Then, if you want, you can have your print custom matted and framed. There are dozens of matte colors and frame styles. You can design your framed print to match your home decor. The possibilities are staggering!

END_OF_DOCUMENT_TOKEN_TO_BE_REPLACED

When I wrote my Illustrated Corvette Series No. 177 column for VETTE in October ‘11 covering the 2012 Centennial Edition, there was zero talk about 2013 special editions. And frankly, I wasn’t anticipating the announcement of the 60th Anniversary Special Edition until the Spring. Then in early January, “BAM!” Chevrolet unleashed the 60th Anniversary Edition, plus the delicious 427 Convertible. While I personally like a little more sizzle, the two ‘13 special editions are indeed sweet. But it did complicate the main question of my column, “Is the 2012 Centennial Edition ZR1 the best of the C6 Vettes?” END_OF_DOCUMENT_TOKEN_TO_BE_REPLACED

A Look Back At Special Versions Of Chevy’s Special Sports Car, Part II 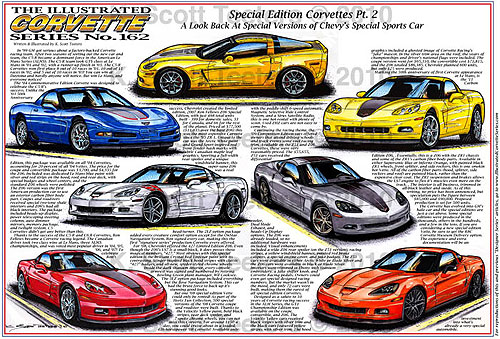 The arrival of the ‘05 C6, and then the ‘06 Z06 created such a big splash, no one was expecting a special edition any time soon. So when the ‘07 Ron Fellows Special Edition Z06 was announced, Corvette fans were treated to what would become an almost yearly experience. Except for ‘10, there have been special edition Corvettes every year. IN ‘08 and ‘09, there were two special editions each year! Chevrolet was really getting into this “special edition” thing. Part II covers the special edition Corvettes from the ‘04 Commemorative Edition to the latest “to drool for” special-ed Vette, the ‘11 Carbon Edition. 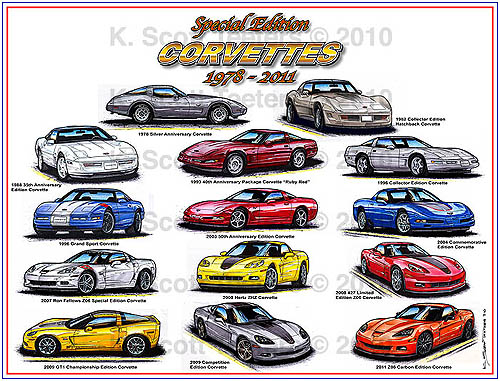 I have a very nice relationship with VETTE Magazine. Since 1976 I’ve been a contributing artist and writer with the magazine shortly after founding editor Marty Schorr started the first Corvette-only newsstand magazine. My monthly column, “The Illustrated Corvette Series” started in Spring of ‘97 and continues on. Next week I’ll be starting No. 165 that will cover the awesome Greenwood G572 C4 Corvette.

The November ‘10 issue of VETTE saw a major makeover for the publication. Corvette Fever is no more, as it has been merged with VETTE. The “new” VETTE is 3/8” taller and wider, has 16 more pages, better paper, and a perfect binding. The new VETTE looks EXCELLENT, my compliments to VETTE’s art department. Included was The Illustrated Corvette Series No. 162 – Part 1 of a two-part, two-page color article that covers the Special Edition Corvettes from 1978 to 2003. END_OF_DOCUMENT_TOKEN_TO_BE_REPLACED 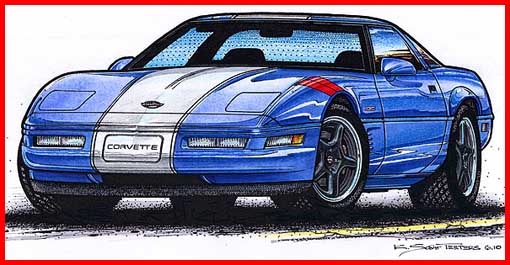 Things have been COOK’N here at Free Spirit Enterprises. Last month, not only was our Illustrated Corvette Series book released for publication, but we launched a new website, CorvetteLaserArt.com. With those two big projects behind us, we’ll now have more time for The CorvetteReport blog.

So, here’s what’s coming up in The Illustrated Corvette Series, as well as some BIG NEWS at VETTE Magazine. END_OF_DOCUMENT_TOKEN_TO_BE_REPLACED