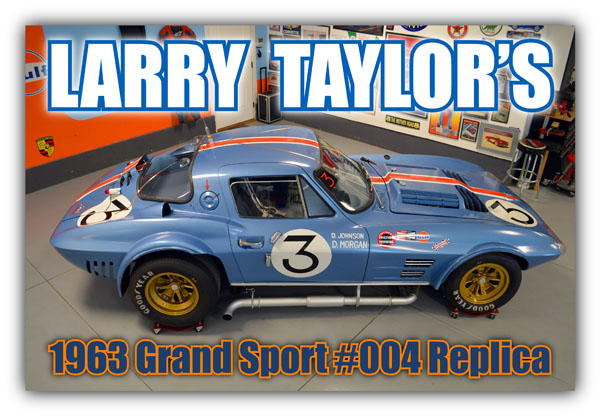 When it Comes to Grand Sport Replicas, Attention to Details Pays Off!

Dateline: 2-1-22 This story was first published in the February 2019 issue of Vette Vues Magazine – Larry Taylor’s passion for Corvettes might be genetic. The Clinton, Utah resident’s grandfather was into Corvettes in the 1950s. Grand Pop passed down his Corvette passion to Larry’s Dad who owned a 1966 Sting Ray that he drag raced a little and also used to trailer his boat. When it came time for Larry to enter the world of automobiles, his first Corvette was a 1959 model that he bought in 1984. 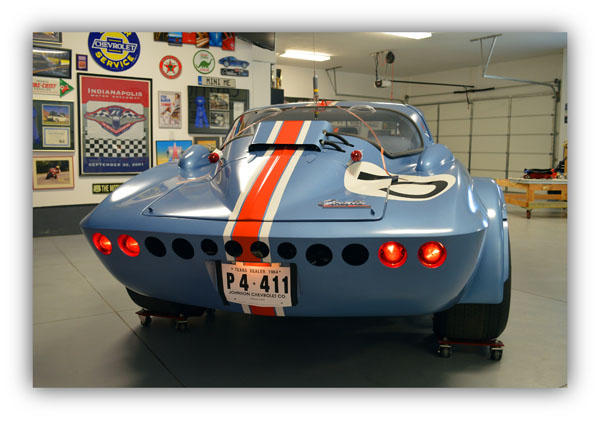 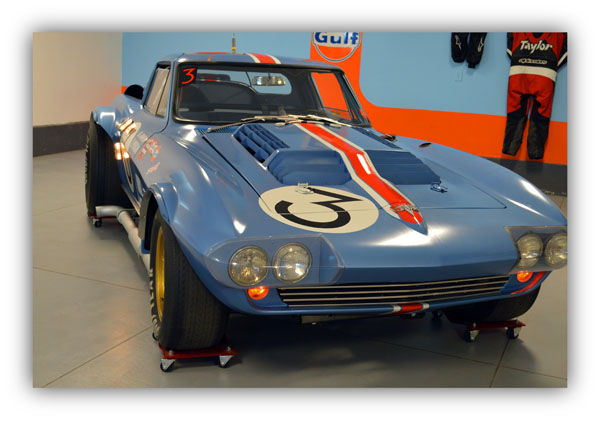 While all this was going on, Larry did some open-wheel racing and always liked Corvettes with racer-style. So if you are into “racer-style” and you own a 1963 Split-Window Coupe, it is no stretch that you would be drawn to the 1963 Grand Sport Corvette; the greatest “could have been…” Corvette of all time. If you are new to the Corvette hobby you might be wondering, “What’s so special about a Grand Sport Corvette? It’s a nice model Vette, but what’s the big deal?” Well, we’re not talking about the 1996 Grand Sport, or the C6 and C7 Grand Sports. No, we’re referring to the 1963 Grand Sport Corvette all-out racecar; arguably THE most storied car in Corvette history. Here’s the short version of why the Grand Sport is still being talked about, longed for, and honored with the production and replica Grand Sports. 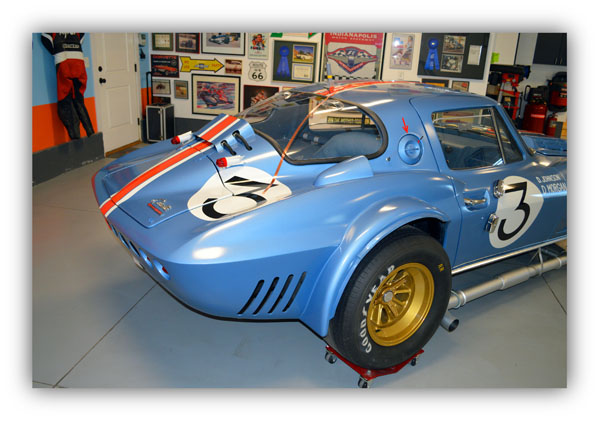 In early 1962, after the major engineering work was completed on the new, upcoming 1963 Sting Ray, Zora Arkus-Duntov and his team got to work on RPO Z06. Duntov’s C1 racer kit program was hugely successful, such that by the end of the 1950s and into 1962, Corvettes were a force to be dealt with in SCCA racing. The Z06 was to carry on with Duntov’s program. That is until Carroll Shelby’s 2,000-pound Cobra arrived. 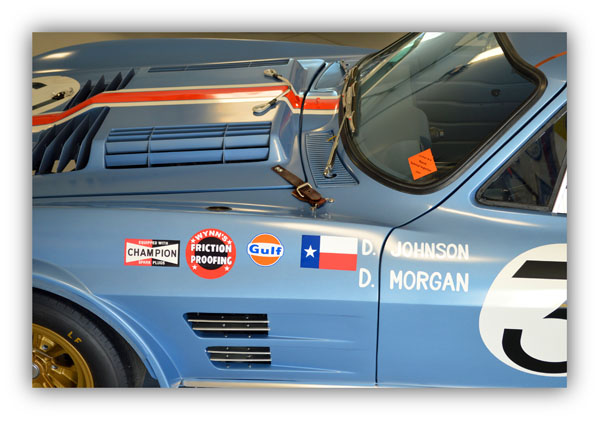 Duntov was an experienced racer and he knew that his 3,000-pound Z06 Sting Ray would be no match against the 2,000 Cobra. To Duntov, it was obvious; he needed to build a lightweight Corvette and to do this if would have to have a tube frame, an exotic engine, and a lightweight replica body. But what he really needed was official permission. Fortunately for Duntov, he had a friend at the top of Chevrolet; Semon “Bunky” Knudsen. 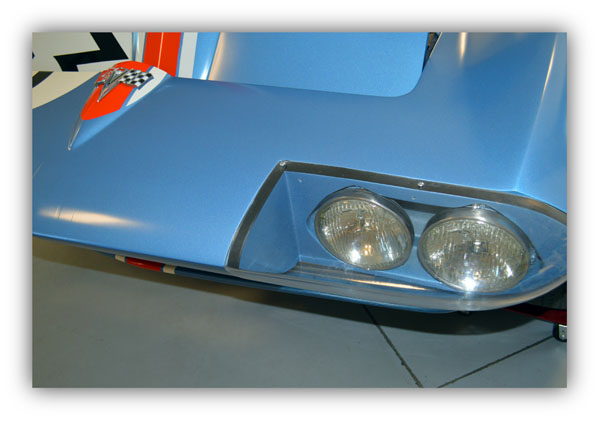 Knudsen was a serious “car guy” corporate officer who worked his way up through the ranks at GM. As general manager at Pontiac, he turned the brand’s stodgy image around with his Wide Track, Tri-Power performance cars, and factory support in NASCAR racing. His reward for doing a great job at Pontiac was the general manager position at GM’s flagship division, Chevrolet in 1961. 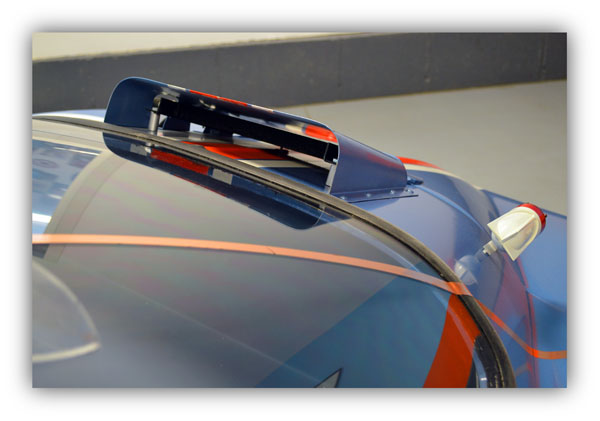 Knowing he had Knudsen’s ear, Duntov outlined his plan to get around GM’s adherence to the 1957 AMA Racing Ban. Duntov’s idea was to build limited production lightweight Corvettes that would sell for around $16,000-to-$20,000 and let the customers do the racing. Knudsen green-lighted Duntov plan and five, special cars, called, “The Lightweights” were built. 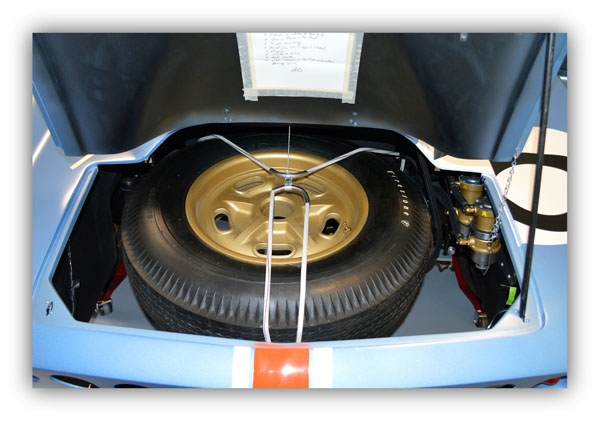 By November 1962 cars were completed and were renamed “Grand Sport”. They looked almost exactly like the production Corvette, but with minor differences and no split rear window. Initial testing at Sebring in December 1962 was very promising. But when word of Duntov and Knudsen’s covert activities reached GM President Frederick Donner, the Grand Sport came to a screeching halt! Documents at The GM Heritage Center indicate that the five Grand Sports and the spare parts were ordered to be warehoused, but that didn’t last long. 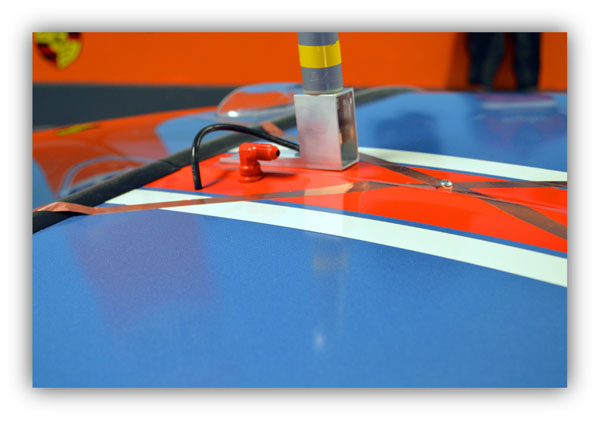 Duntov gradually loaned out Grand Sports #003, #004, and #005 to privateer racers. But without a proper development program, the cars were not successful and their performance was inconsistent. By the end of the racing season, Duntov called in the three Grand Sports for a few “improvements”. Duntov wanted to give his Grand Sports a fighting chance against Shelby’s Cobras at the upcoming 1963 Nassau Speed Weeks race at the end of November and the beginning of December. 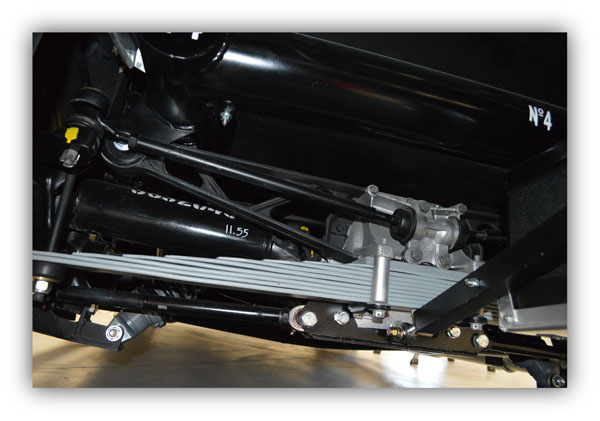 When Grand Sports #003, #004, and #005 arrived in Nassau under the banner of the “Mecom Racing Team”, they were loaded for bear. This is the now-classic Grand Sport look; fat racing tires on wide knockoff wheels, aggressive vented hood, and big wheel flares. And under the hoods were Duntov’s latest engine jewels, the all-aluminum 377 small-block Chevy with 58mm side-draft Weber carbs. It was a romp for the grand Sports, as the Cobras were thrashed. 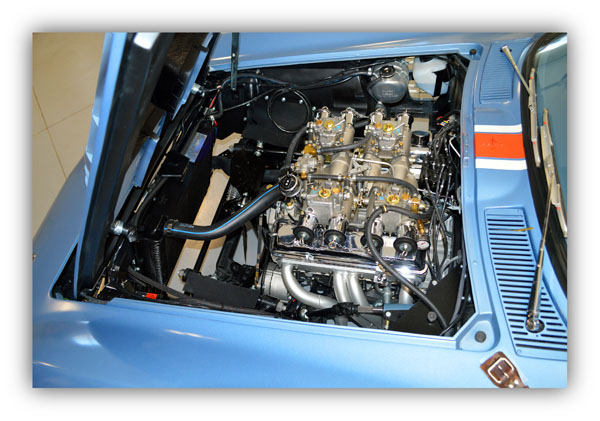 Three months later, the 1964 class win at the 12 Hours of Sebring with Roger Penske at the wheel of Grand Sport #005 would be the high-water park for the Grand Sports. This time period saw extraordinary advancement in racecar technology, such that by the end of 1965, the three-year-old cars were outdated. 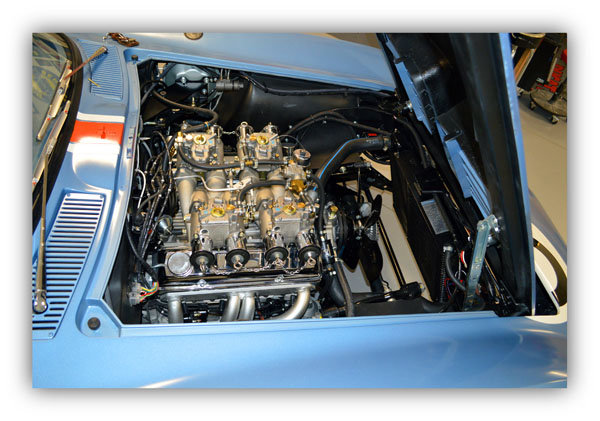 When the Grand Sports received their upgrades in preparation for the 1963 Nassau race, Grand Sports #001 and #002 were made into roadsters and held back, but were eventually sold and raced, as were the coupes. Fortunately, all of the cars survived, are in excellent condition and are each worth millions of dollars. Over the years, Grand Sport Corvettes have thrilled thousands of fans, many have lusted to own one of the five cars, and around two dozen have actually owned Grand Sports. 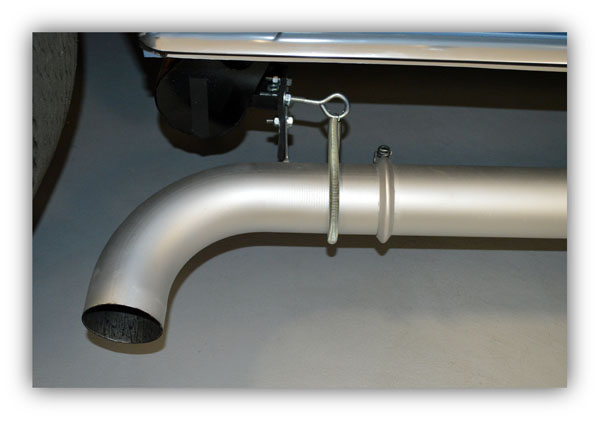 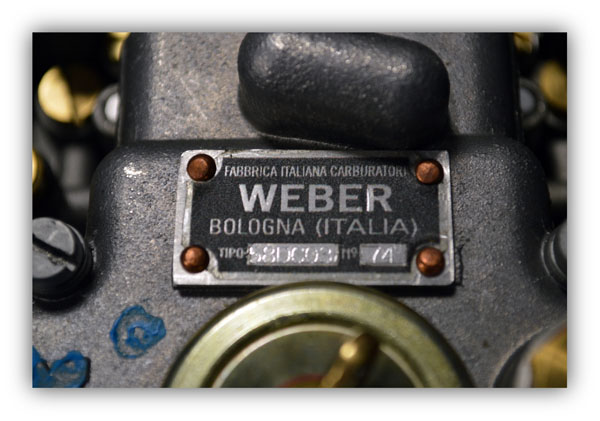 When you buy a Grand Sport roller from Mongoose you get the bare fiberglass body and interior, and a 4-inch tube chassis and basic suspension from a 1988 Corvette. The rest is up to you and your skill level. Larry bought the rolling chassis in April 2016. Many Grand Sport replica cars are finished as street machines with modern paint, wheels, tires, and amenities. A few are street versions of the real Grand Sport replicars. If you are going the racecar replicar route, you have to research which livery you want to replicate. Since the three Grand Sport coupes were raced by numerous owners; in different configurations; and liveries; one has to do their homework; and pay attention to details. Fortunately for Larry, he’s very good at that. After careful research, Larry chose the Sebring ’64, Delmo Johnson, and Dave Morgan livery. Today the actual car is part of The Reve Institute in Naples, Florida. 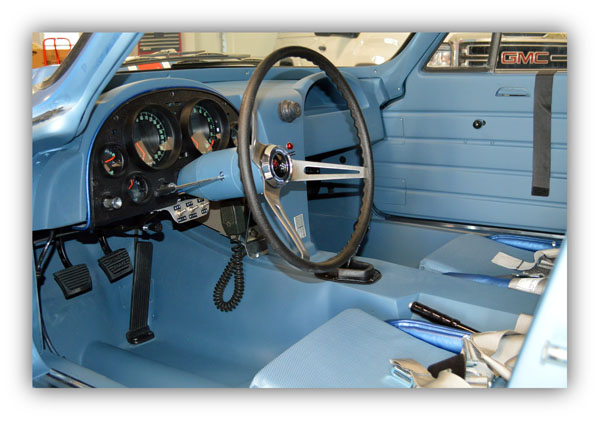 An all-aluminum 377-cubic-inch Donovan small-block Chevy engine with four Weber 48-mm side-draft carbs powers Larry’s Grand Sport. The real small-block Grand Sports used 58-mm Webers, but they are insanely expensive. The side exhausts are hand fabricated. The radiator, oil cooler, and power brake booster are 1963-style. The transmission is an M22 4-speed “Rock Crusher” and the shifter is an original 1963 shifter.

The front suspension is from a 1988 Corvette and has rack & pinion steering. The rear suspension is somewhat unusual. It is a modern coil-over suspension that uses the C4 differential and “batwing” rear cover and carrier. For an authentic look, Larry added a set of C2/C3 leaf springs and painted the batwing differential carrier black. 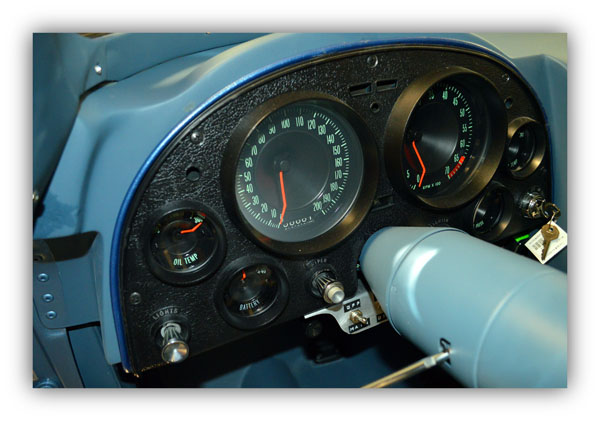 “font-size: large;”>As delivered, Larry’s Grand Sport interior was bare fiberglass. Larry added some extra bolsters to the fiberglass seats, period-correct seat belts, a fire extinguisher, and a period-correct CB radio and antenna. The speedometer has been fitted with a 200-mph speedometer face and the factory fuel gauge has been replaced with an oil temp gauge. The toggle switches control the main fuel pump, differential cooler, and reserve fuel. 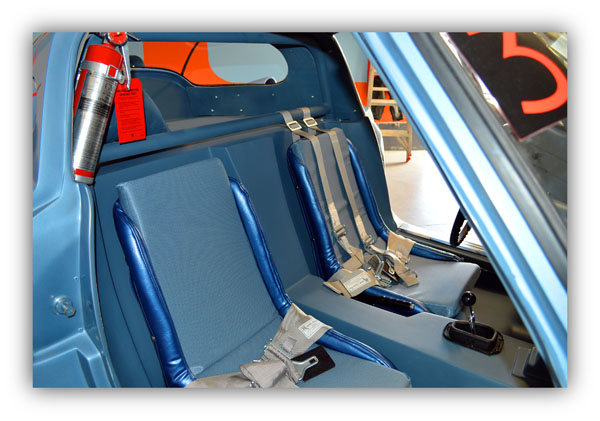 With a ton of photographic references for the Grand Sport #004 that currently resides at the Collier Museum, Larry applied his attention to detail skills to his Grand Sport replicar. As seen in these photos, the car was just completed in November 2018. Larry’s plans for 2019 are to show the car at Corvette shows and maybe at the National Corvette Museum. Then, he will bring the car back into his shop, remove the body, add all of the required modern safety equipment, and then take the car to the track. 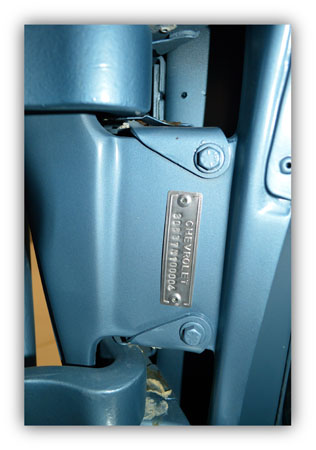 The Donavan 377 small-block Chevy engine pulls around 550-horsepower, so weighing in around 2,250-pounds, that’s a power-to-weight ratio that will be a lot of fun on the track. Larry says, “I just want to have the experience of being on a race track with my Grand Sport and other vintage cars, just to be there; not to race and win anything, but just to get a sense of what it must have been like back in 1964.”

That’s something I believe we have all fanaticized about Larry. Go for it! – Scott