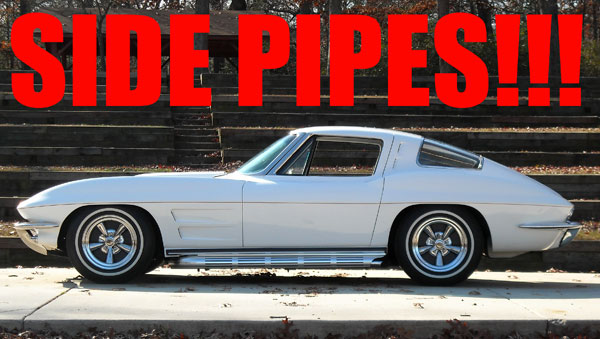 It all got me to thinking about those infamous, barking side-pipes that were offered from ‘65 to ‘67, and slightly milder ‘69 side-pipes that made even the 300-HP small-block sound as ominous as a junkyard dog. Two unique designs were offered back then. Beginning in ‘63, as part of the overall Z06 package, was the $37.70 N11 option, the Off Road Exhaust System, which included low-restriction, under the car mufflers and 2-1/2-inch exhaust pipes. This option was available through to ‘68 and was officially listed as “off-road.” (That’s GM-speak for “race track”, is in, racing.) The N14 Side-mount Exhaust System was another animal altogether. The system begins at the end of the exhaust manifold flange with the typical 90-degree bend. But instead of bending towards the back of the car, the bends were directed towards the sides of the car. After a short distance of about 12-inches or so, there was a gentle bend of approximately 118-degrees that leads to a long, straight tube that passed as a “muffler.” The “muffler” portion that ran along the side rocker panel had small crimps that created little internal baffles – and not much baffle at that. Read More