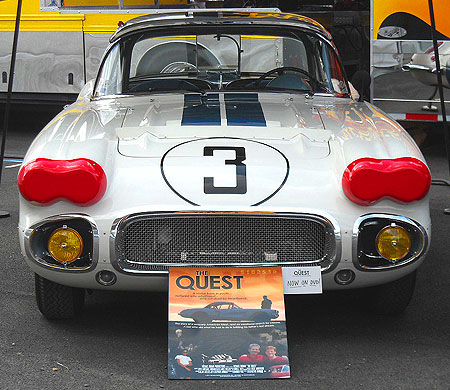 The 1960 Fuel Injected Corvette famously known as the “Cunningham Le Mans Assault” car is now a movie star! It seems that for most of us, there’s a Time/Date stamp on our affection for Corvettes that coincides with that first moment we laid eyes upon the machine. For me, it was ‘66 to ‘69 big block Corvettes. For Chip Miller, it may well have been this car, the 1960 Briggs “Swift” Cunningham 1960 Fuel Injected Corvette. it’s not hard to “get” the passion. When you look at the machine, it screams “RACE CAR!” And while that is definitely correct, a closer examination of the car reveals how astonishingly close the car is to a stock ‘60 Fuelie Corvette.

For an excellent look under the pretty fiberglass, check out THIS PAGE from the Corvette restoration masters at Corvette Repair. Kevin MacKay and his team are arguably the masters at vintage Corvette racer resto work. Thanks to Corvette Repair’s work, this car has won the NCRS American Heritage Award.

Here was the deal for this Le Mans-winning Corvette. The car started life as a new Fuel Injection optioned 1960 Corvette. Cunningham’s team was well seasoned at preparing a car for endurance racing and took maximum advantage of Duntov’s “racer kit” options. RPO-579D got you the then top-of-the-line 283/290-HP Fuelie engine. RPO-685 mated the 4-speed manual transmission to the Fuelie. RPO-687 added the heavy duty brakes and special steering. And RPO 1625A added the oversized 24-gallon fuel tank. That’s essentially all that was needed from the factory to build a race car upon. This configuration was the 1960 equal to a 2012 Z06. From there, the Cunningham team removed items that race cars don’t need, such as front bumpers, and fancy interior door panels, and added safety and go-fast parts, including racing lights, louvers on the hood for additional cooling, headlight covers, side-mounted exhausts, Halibrand lightweight racing wheels, a quick-fill gas cap, and miscellaneous other touches. The car was AMAZINGLY stock. This will be obvious when you check out Corvette Repair’s Portfolio Page.

The rest is history. With John Fitch and Bob Grossman doing the driving, the Cunningham Corvette took first place in the GT 5000 class and finished in 8th place overall. Pretty damn impressive for a machine so close to a production car from St. Louis! END_OF_DOCUMENT_TOKEN_TO_BE_REPLACED

Dateline: 8.4.11
A Birthday Salute to One of the First Corvette Hot Shoe Drivers, John Fitch

Racing and Corvettes are completely inseparable. John Fitch was already a hot shoe when Zora Arkus-Duntov hired him to drive one of the three specially prepared ‘56 265-CID Corvettes for a speed record run on the sands of Daytona Beach, Florida in January 1956. Were it not for those exciting early racing experiences, the tone and attitude of the Corvette would have been closer to a passenger car rather than a scrapper race car. And John Fitch was part of the first wave of Corvette drivers.

After serving in WW II as a fighter pilot, Fitch got his degree in engineering and went to postwar Europe to race sports cars. Fitch was one of the first American engineer/drivers that set the template for future engineer/drivers, such as Mark Donohue and others. A thorough understanding of how things mechanically function has proven to be an incalculable asset to a successful racing enterprise.

Before driving for Chevrolet, Fitch won the very first SCCA national championship and was the only American to drive for the Mercedes-Benz factory team. In 1957 Fitch was hired by Chevrolet to prepare and manage a team of stock and semi-modified Corvettes for competition. That same year, Duntov literally put Fitch’s feet to the fire driving the obscenely hot (temperature wise) SS Corvette.

Besides racing Corvettes, John won the 1951 Argentine Grand Prix, the 1955 Mille Miglia production class, and John competed at Le Mans six times, finishing as high as 3rd place. He was the first general manager at Lime Rock Park race track, developed the yellow “Fitch Barriers” crash barrels, and started the first advanced driving school. Being an innovator must have been in Fitch’s DNA, as his ancestor, also named John Fitch, was a clock maker, silversmith, and built the first functioning steamboat in 1787. END_OF_DOCUMENT_TOKEN_TO_BE_REPLACED