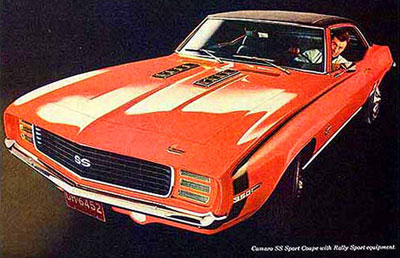 Chevrolet is making the most of their 100th birthday. For the Corvette community there’s the 2012 Centennial Edition option that is available on every model Corvette. It’s a beautiful aesthetics package and I’m sure that when combined with the other customer options will make for some very interesting combinations.

Several months ago, Chevrolet launched a popularity contest asking, “What’s the Best Chevy Ever?” On August 31, 2011 we covered the story because it had come down to the last two finalists – the 1969 SS Camaro and the 1970 SS Chevelle. Like we said, this is strictly a popularity contest, because if performance and technological achievement was the objective, the clear winner would have been the C6 ZR1. But, that was not the case.

Yesterday, Chevrolet announced the winner. So, as voted on by Chevy fans around the world, the most popular Chevy of all time is… The 1969 SS Camaro!!! Chevrolet points out that not only was 1969 the last year of the original Camaro design, it had the following accomplishments.;

Here are some of my favorite 1969 Camaros… END_OF_DOCUMENT_TOKEN_TO_BE_REPLACED