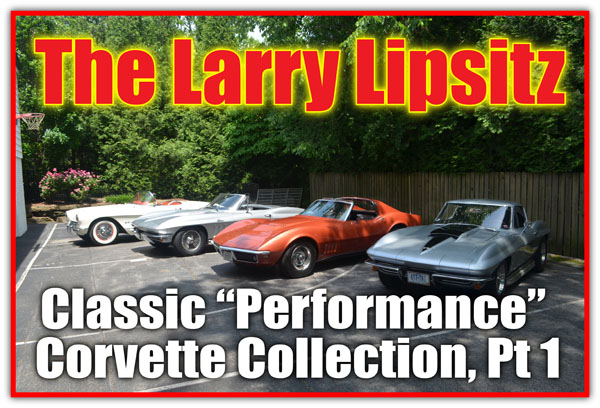 Dateline: 9.12.22 – This story was first published in the September 2022 issue of Vette Vues as part of their ongoing “Reader’s Rides” series of stories.

From 1956 to 1980 Corvette buyers had optional performance engines that were available. The 1953 and 1954 Corvettes only had the Blue Flame Six engine because that’s all Chevrolet had to offer. The small-block V8 was still being developed, so with help from three-time Indy 500 driver and engineer, Mauri Rose, the tried and true Stovebolt Six was given as many performance enhancements as it could take. Chevy’s old 115-horsepower engine was massaged up to 150-horsepower. Underwhelming in hindsight, but Rose had to work with what Chevrolet had.

In 1955 when the all-new small-block 265 engine was released for production, it was installed in all but seven of the 700 Corvettes built for 1955. Horsepower went from 150 to 195-horsepower, a nice bump. For 1956 the Corvette also got a total body makeover, but the car was on life support. 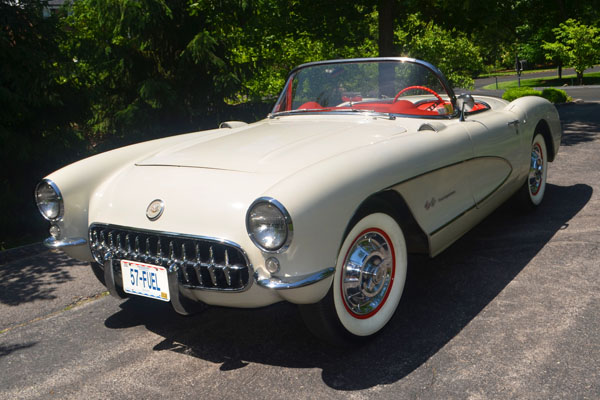 By then Zora Arkus-Duntov was guiding the Corvette and starting with the 1956 Corvette, there was a performance engine option. For an extra $172, customers could check off the 265/225 engine with two, four-barrel carbs and enjoy 225-horsepower, and a manual 3-speed manual transmission was standard.

1957 was the breakthrough year

The 265-small-block engine was enlarged to 283-cubic-inches, the 3-speed manual transmission was standard, and the Powerglide automatic was available for $188. But the big news was that in addition to the optional 245-or270-horsepower two four-barrel setup, there were four fuel injection options available with power from 250 or 283-horsepower at the cost of $484. Plus, a 4-speed manual transmission was available for $188. From this point forward, new Corvettes could be ordered from mild-to-wild. 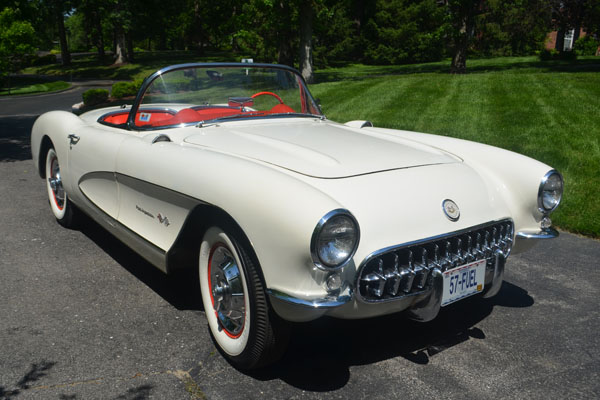 The base-model Corvette with the Powerglide automatic was a nice car for an affluent housewife or secretary. High-performance Fuelies with the four-speed manual transmission were for the manly-men and delivered astonishing performance for their day. When the big-block became available in late 1965, the top-of-the-line performance Corvettes could be darn-right frightening for the uninitiated, small children, and dogs.

Insurance companies went to war against performance cars. Too many were being stolen, crashed, or had their engines blown up. Some of the more timid owners of performance Corvettes drove their cars gently, but many were seriously thrashed. If you bought a used Fuelie or big-block, odds were that the car may have been beaten like an old mule.

After the big-blocks were phased out after 1974, the optional “performance” 350 L82 engines were tame compared to the performance option engines of the past and tended to not be driven so hard. On top of that, Corvettes were heavier due to government-mandated crash and emission equipment. Their performance capability was greatly diminished, but they were still sexy as a cat. Corvettes had become boulevard cars. 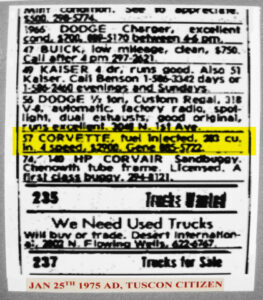 What is astonishing about Larry Lipsitz’s collection of four performance Corvettes is that none of them were ever thrashed and bashed. For a brief time the 1957 Corvette was a bad-ass drag racer! Every Corvette has a story and each of Larry’s Corvettes has a great story. So, let’s get straight to Larry Corvettes.

Of all of Larry’s Corvettes, I think this is the most amazing because for a time it was a drag racer, but we’ll get to that. Larry knew about the car since the early ’90s. Owning a ’57 Corvette Fuelie was something Larry had wanted for a long time, but as they were relatively easy to fake (tank stickers were not used until 1967), and due to limited paperwork, he was always hesitant. 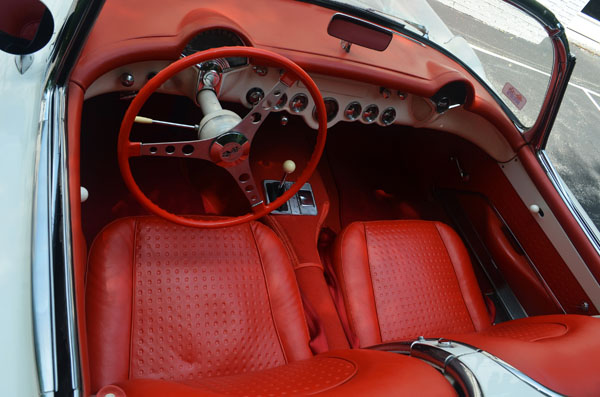 Often when restored ’57 Fuelies came up for sale they had numerous replacement parts. When this one came up Larry knew it was an original un-restored, low 33,000 mile car. He also knew it was an original body, no hit car. Plus, the Texas inspection sticker from 1982 showed 27,567 miles on the car. The fourth owned, Al Mahanna only put 5,400 miles on it in 33 Years!

The first owner of the ’57 Fuelie is lost to time

We pick up the ownership lineage in 1972 when owner #2, drag racer Gene Layne, from Tuscon, Arizona bought the car. Gene didn’t drive the car very much, just one quarter-mile at a time. The car was trailered to and from the track and was not driven on the street. Gene pulled the 283 Fuelie out of the car, kept it, and dropped in a 383 500-horsepower small-block stroker engine. 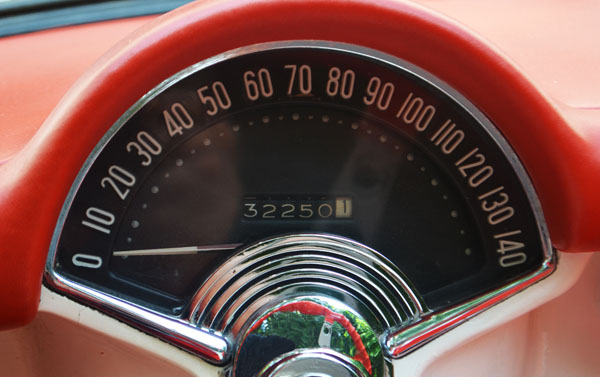 Typical early ’70 drag racing tricks were applied: open headers; electric fuel pump; Super T-10 4-speed transmission; locked rear; very tall gears; reversed spring shackles to raise the rear for clearance for the racing slicks; traction bars, and Cragar wheels. The ’57 Corvette consistently ran low 10-seconds in the quarter-mile, and under 10-seconds at a track in California that was at sea level! Early small-block Corvettes could be made into fierce drag racers.

After two years of racing, Gene sold the ’57 Corvette, but not before he put all the original parts back on the car. Fortunately, all of the modifications Gene made to race the car could be reversed and were. Dayrl Yoder, owner of Yoder Motors, in McAllen, Texas became the third owner of the car. For a short time. Yoder owned Pontiac and Cadillac dealerships and was a car collector. His shop refreshed the car and did some mild restoration, but for financial reasons, Dayrl decided to sell the car. Essentially, he flipped the car.

Al Mahanna was looking for a 1960 Corvette, but the low-mileage ’57 Fuelie for sale at Yoder Motors caught his eye. The semi-restored ’57 Fuelie was back to being a daily driver. When Mahanna bought the car Yoder had removed the Cragars and slick, and mounted the original steel wheels and tires. Mahanna replaced the old tires so his wife could drive on new rubber. While the car was at Ray’s Corvettes getting a tune-up, someone stole the convertible soft top!

The ’57 Fuelie starts racking up awards

In 1987 Mrs. Mahanna took the Fuelie to the 30th Anniversary Celebration at the NCRA National meet at Lake of Ozarks and scored a Second Flight Award. The NCRS judge liked that the car had its original trunk mat. The $215 optional Auxiliary Hardtop with the white headliner was an accurate replacement but got a pass because the car could be ordered as such in Arizona in 1957. 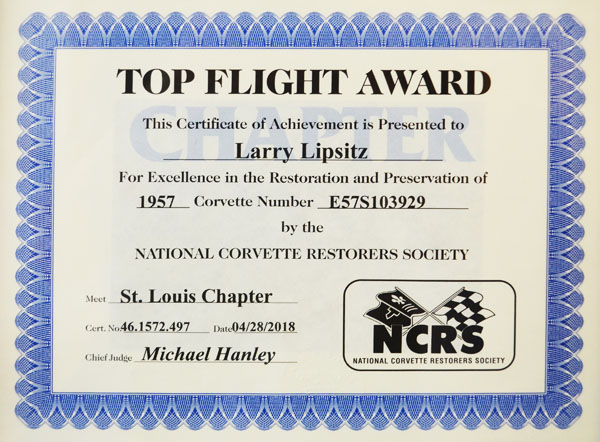 In 1990 Bloomington Gold launched their “Survivor Award” for Corvettes that were at least 20-years-old, could pass a short road test, and were at least 50% un-restored in three of the four judging categories. Mahanna’s ’57 Fuelie took home a Survivor Award.

Things such as this and Top Flight awards aren’t just certificates for the owner’s wall, they certify a car’s uniqueness and can add value to the car going forward and a to-do list of what to replace if the owner chooses to move forward in Top Flight competition.

By 2015 Al Mahanna decided it was time to let the old Fuelie find another good home. While Larry’s biggest Corvette passion is for C2 and C3 big-blocks, he just couldn’t pass on a first-generation bad-ass Fuelie Corvette. From 1957 to 1964 fuel-injected Corvettes were at the top of the feeding chain for Corvettes. 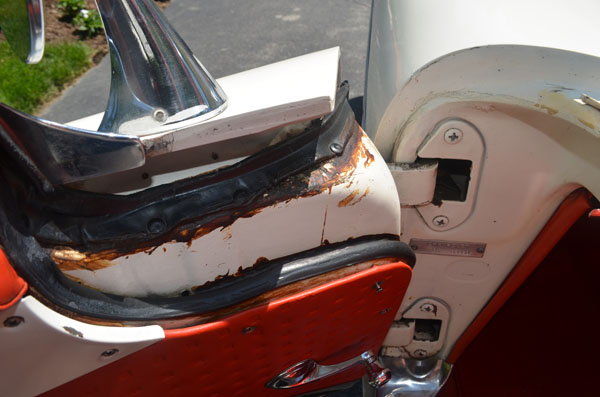 The old Survivor Corvette was in very good condition when Larry bought the car and only needed a few repairs, nothing serious. A close examination revealed that the rear and bell housing weren’t correct, so they were addressed. The tires were replaced with new period-correct, wide-whitewall Coker tires.

Cars such as this, if they are going to be regularly driven, should never ride on old tires. The seat covers, carpeting, and dash pad were worn out and correctly replaced. And lastly, the Hardtop headliner needed to be replaced. 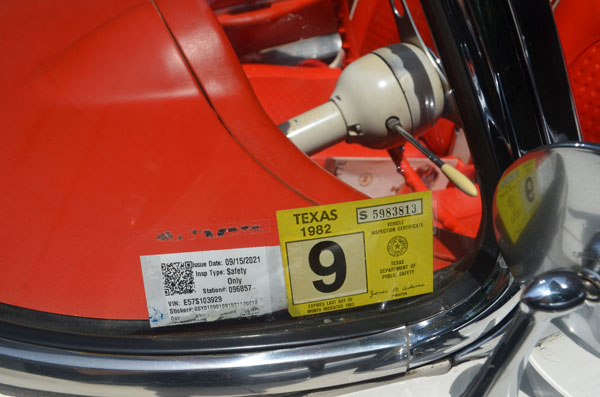 Larry had the authenticity of the Rochester Fuel Injection unit, engine block stamp, air, and fuel meter, and fuel bowl verified by Ken Kayser. When Larry went for a Top Flight Certification at the local NCRS Meet in Saint Louis, Head Judge, Kelly Waite, was excited to see the verification from Kayser. The ’57 Fuelie got the Top Flight Award.

Duntov considered all Corvette customers to be “his” customers and wanted them to “drive and enjoy” their cars. While survivor Corvettes such as Larry’s shouldn’t be used as daily drivers, his are indeed driven and enjoyed regularly. Larry drives all of his performance Corvettes about once a month and feeds them high-octane racing fuel. They like it that way. 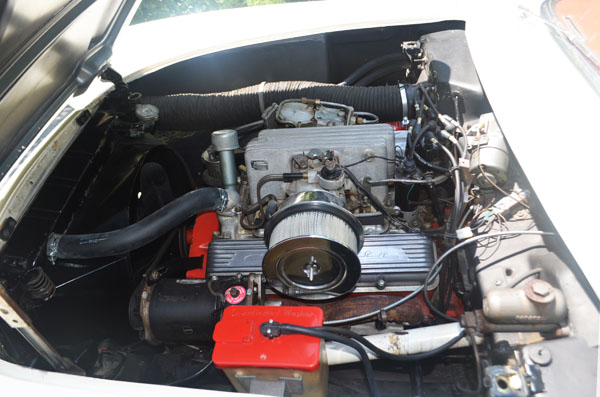 * First year for the 283 small-block engine

* Successfully and safely drag raced in the ’70, consistently ran low 10’s in Arizona and once in the high 9’s in California 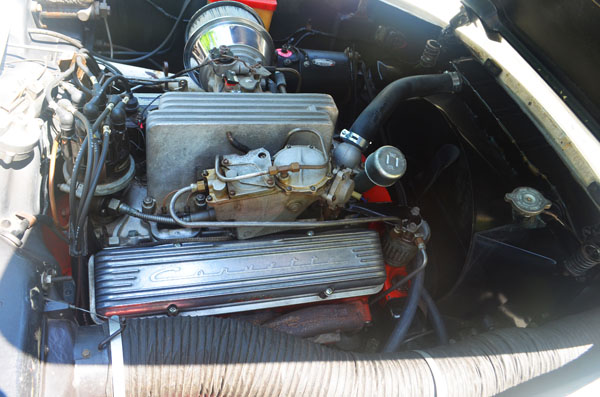 PS – This story was first published in the September 2022 issue of Vette Vues as part of their ongoing “Reader’s Rides” series of stories.