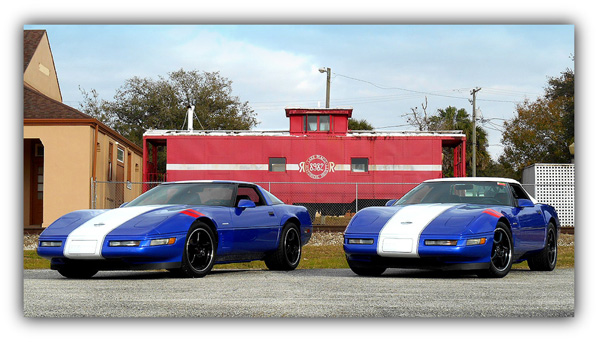 Against all odds, a 1996 Grand Sport Coupe and Convertible live two blocks from one another in rural Florida!

Dateline: 1-23-22, this story was originally published in Vette Vues Magazine – When we moved to the tiny town of Lake Placid, Florida in 2014, I wasn’t expecting such a robust car culture. It’s not huge, but it is considerable. Once a year in July, Lake Placid hosts their annual Caladium Festival, with a Car & Bike Show at the DeVane Park that is well attended.

Lake Placid is located 15 miles south of Sebring in Highlands County, in south-central Florida. The town was chartered by Melvil Dewey, the inventor of the Dewey Decimal System, and is the sister city of Lake Placid, New York. The town is best known for several things: it is the “Town of Murals” (there are 46 murals painted on downtown businesses), the “Toby The Clown Foundation” Clown College, the “Caladium Capital of the World,” 27 freshwater lakes, and in 2012 Reader’s Digest Magazine voted Lake Placid as “The Most Interesting Town in America.” 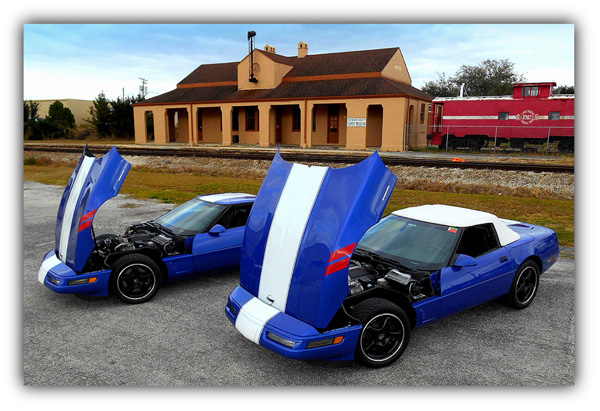 With only 2.84 square miles and a population of around 2,000, the best way to describe the town is; think “Mayberry” as in “The Andy Griffith Show.” Between Sebring and Lake Placid there are orange groves, farms, and cow pastures. To the south, east, and west of the town, there are more farms, pine trees, cows, and let’s not forget the gators and bears!

I met John Meyerhoff in 2015 after a man tipped me off about “… a guy in Lake Placid that has one of EVERY generation Corvette!” Before the C7 came out, Meyerhoff had one of each generation. John sold his C1 to make room for his future C7, but it gets even better. John’s lady, Mary Carol Plott also has four Corvettes! Now THAT’S a “Corvette Power Couple”! John and Mary Carol appropriately met at a car show in Lake Placid. How’s that for Fate?

John got the Corvette bug back in the mid-1960s thanks to a fellow Navy officer and bought his first Vette, a 1966 427/425, 4-speed Mosport Green Roadster, around Christmas 1965. After John settled down and started a family, the Corvette was exchanged for a down payment on a house.

By the late 1970s, John got into a 1973 350/250 L82 roadster that fell casualty to a divorce and there were no Corvettes in John’s life for 15 years. John eventually remarried and by 2001, bought a new Magnetic Red convertible. John found the 2001 convertible to be a very comfortable road car and started racking up lots of miles. He was also getting close to retirement time. 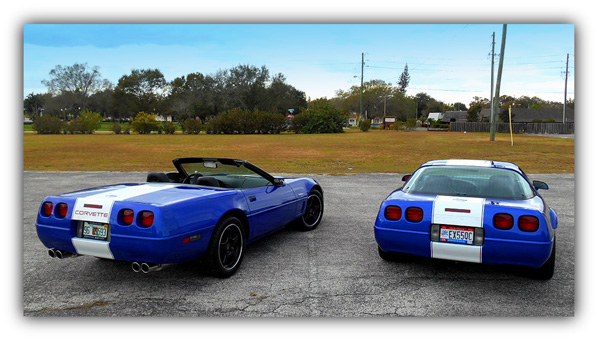 Most of us have a soft spot for our “first Vette,” so John began searching for another 1966 427/425 roadster. Finding another Mosport Green 1966 big-block roadster, but he finally found one that was close enough, a super sano Sunfire yellow 427/425 Roadster. With no power steering or brakes and a very heavy clutch, this is NOT a daily driver, but it makes for a great show car.

After full retirement, John’s wife passed and he decided that “Corvettes” would be his retirement.

“I came up with a new goal. I wanted one Corvette of each generation and I happened to find the 1996 Grand Sport Convertible. It was really dumb luck because although I had owned many Corvettes, I didn’t follow the special editions, so I really didn’t know what I had, I just liked the color scheme and the fact that it’s a convertible. It turns out that it’s one of four other Grand Sports with the exact same combo of options. Then to fill up the collection, I got the 1969 427 Convertible, then got a red-on-red 1960 Corvette. Before the C7 came out, I had one of every generation!”

Except for the Grand Sport Convertible, John’s five Corvettes are mildly modified. He doesn’t race them, but he does enjoy them with an occasional blast. John’s attitude when it comes to his Corvettes is that if a modification will improve the car’s performance or durability and drivability, he doesn’t mind making changes.

Ron Ellerman’s story is quite different. Ron was a boilermaker by trade and eventually owned a very successful, full-service car wash in Ohio. Over the years Ron had numerous interesting cars and motorcycles, but in his heart, he always wanted a Vette. He got his first Corvette bite when his older brother let him borrow his 1966 427 Roadster while Ron was in high school.

“I was always good at working on cars. As long as I could get something apart, I could reassemble it. In 1996 my local Chevrolet dealer had one Grand Sport Coupe on the showroom floor that he was using as an attraction. I kept looking at the car and thinking how much I wanted it, but the dealer wouldn’t sell! He was hoping to be able to keep it for himself, but I kept working on him. Eventually, he called me and we made the deal.”

Ron was having some health issues and recounts;

“I decided that I couldn’t put it off any longer. I let my business buy the car as a “company car,” paid it off, took the depreciation, and eventually sold the car to myself. The car is totally-stock and has run perfectly for the most part for 20 years. I took the car to a Mecum auction to sell, but couldn’t get what I know the car is worth (1996 Grand Sports are currently very undervalued), so I decided to keep it, probably for good. The car now has just over 10,000 miles on it. I recently noticed a small oil leak at the rear main seal – not bad for a 20-year-old car, I suppose. Since getting the Grand Sport I’ve had lots of “fix-up” cars that I worked on and sold. I had VW Bugs, old Cadillacs, a hot rod Nova, street rods, a few boats, and three Harleys. I like working on and fixing cars, and I love driving my Grand Sport Corvette.” 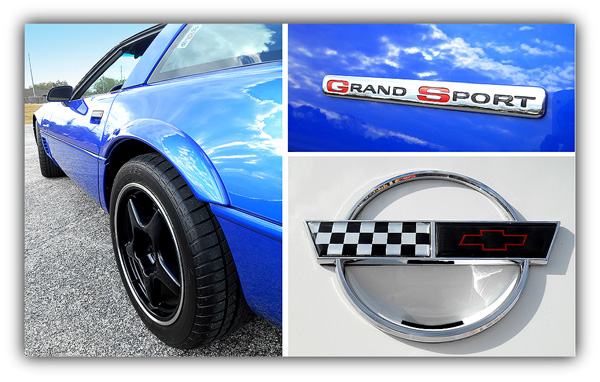 Except for the red accents on the throttle body and the “Grand Sport” lettering, the LT4 looked identical to the LT1. Inside the LT4 it was hot rod heaven and included increased compression (10.8:1 vs 10.4:1) improved aluminum heads, Crane roller rocker arms, a revised camshaft, stronger crank, and revised pistons. All LT4-equipped 1996 Corvettes had 8,000-rpm tachometers. The Grand Sport option was a beautiful way to celebrate the end of the C4 Corvette line.

John Meyerhoff and Ron Ellerman are perfect examples of people that got the “Corvette Fever” that’s permanent. Duntov always wanted his customer to “enjoy their Corvette.” So with only 1,000, Grand Sports built, what are the odds of these two unique Corvettes residing in the tiny town of Lake Placid, Florida just two blocks from one another? Pretty amazing! – Scott

Subscribe to Vette Vues Magazine, only $25.99 for 12 months of the print edition,