They start by saying and asking, “The 2015 Corvette Z06 is a ton or car for the money, but is it the right ton?” Mike Spinelli from After/Drive hosted a 20-minute bench racing session with Travis Okulski of Jalopnik and Jason Harper of Automobile magazine and Time, Inc. All three lads spent time exploring the limits of the C7 Z06 and hoping that the car’s data recorded has a one minute statute of limitations. (pssst… they ALL seriously exceeded the speed limits – big surprise) Click the Read more link to see the video.

In the past, Corvettes in general and even Z06 Corvette have been criticized for all sorts of things; quality, harshness, lack of sophistication, edgy handling at the limits, seats, and even seat latches. But those days are over and after expounding on the C7 Z06’s attributes – extreme horsepower and torque, incredible stiffness, daily drivability, 0-60 in less than 3-seconds, ¼-mile in under 11-seconds, and more – the conversation deteriorated into the parsing of works addressing the lofty question, “Is the Z06 a supercar?” Please!

Check out our C7 Corvette Stingray and C7 Z06 Corvette art prints
in our safe and secure Amazon store, HERE. 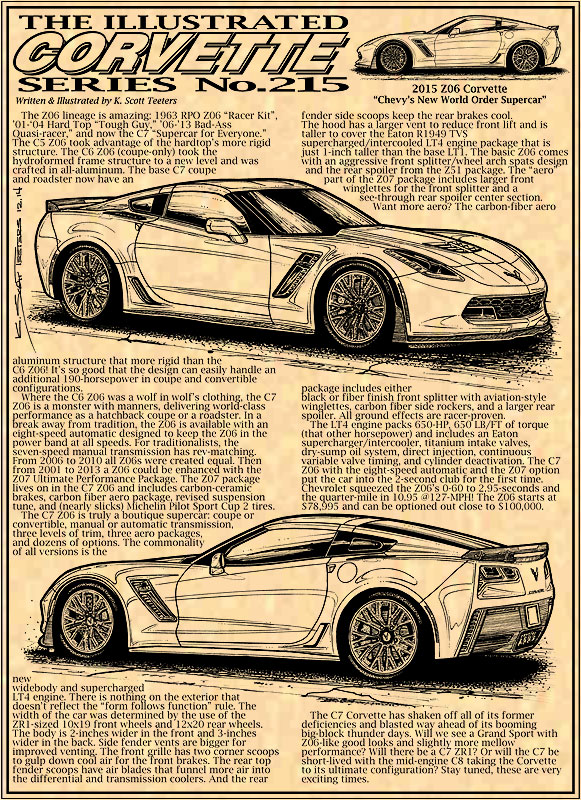