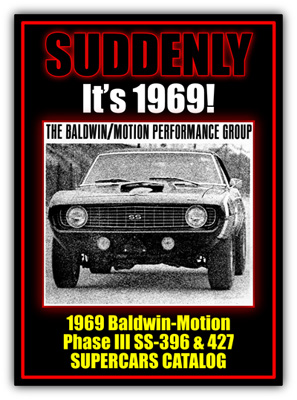 SUDDENLY It’s 1969! A Blast From the Past Baldwin-Motion Supercar Catalog

My automotive coming-of-age started in 1965 when I saw a 1965 Sting Ray in a local Chevrolet dealer’s showroom. By the time the Mako-Shark-inspired 1968 Corvette came out, I was a full-blown motorhead. I thought the Mako Shark-II was the most beautiful car ever made. Although the 1968 Corvette wasn’t exactly the Shark show car, I loved it!

I was just in junior high school and was the only one in my family with an interest in performance cars. My way of keeping up with the burgeoning muscle car scene was through “Hi-Performance CARS Magazine”. My local small-town pharmacy had a huge newsstand rack with almost every car magazine published. And I knew what week the various titles came out.

One day in early 1969 on the newsstand, I spotted the screaming yellow Corvette on the cover with the cover copy saying something like, “Baldwin-Motion Phase III SS-427 Corvette Supercar!” As much as I loved the new Corvette, I loved the Phase III Corvette better! It had flared wheel wells and deep-dish Cragar Mags shod with FAT L60-15 tires. Atop of the stock 427 hood bulge was a ’67 Stinger hood scoop and a Pontiac hood-mounted tach. Finishing the setup was a set of 1965-1967 Corvette side pipes. WOW!

In the back of the magazine, there was an ad for a Baldwin-Motion catalog, for one dollar! I sent away for it and a few weeks later, my carpals and I were pouring over the catalog and bench racing how we would order our own personal Baldwin-Motion Supercar!

I still have that catalog today. So, before it gets lost or fades and falls apart, I thought I should make a PDF version to share. The 1969 Phase III SS-427 Corvette started at around $7,000, or around $51,000 in 2021 dollars. Today these cars are worth hundreds of thousands of dollars. As Marty Schorr told me once, “Joel and I had no idea these cars would be worth this much, and over 50 years later, people still love them!”

As Marty used to say in his editorials in CARS Magazine, “Nuff said!” – Scott

PS – You can access the entire collection of Corvette E-Booklets and the Duntov Files HERE.