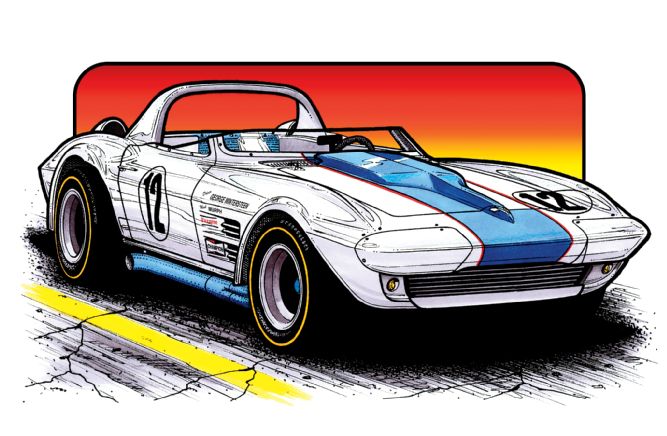 At the Simeone Automobile Museum in Philadelphia, you can actually see, hear,
and smell the Wintersteen 427 L88 Grand Sport Roadster.

Words and Art by Scott Teeters, written for Vette magazine and republished from SuperChevy.com

The Grand Sport is well storied, so here’s the short version. Zora Arkus-Duntov was a racer/engineer first and foremost. Racing and race cars was always first in his thinking, with production cars a distant second. He essentially used General Motors as his race car shop.

When Duntov learned that Carroll Shelby was building Cobras he tried outflanking Shelby with his own lightweight. Five prototype tube-framed coupes were based on the ’63 Sting Ray wearing Halibrand wheels and side-mounted exhausts. Though Duntov had the backing of Chevrolet general manager Semon “Bunkie” Knudsen and Ed Cole, on January 5, 1963, GM’s hammer came down and the Grand Sport was officially dead.

But not so’s you notice on the racetrack. Privateers raced Grand Sports, but without support from Chevrolet the cars had a rough time. Duntov wanted to stick it to Ford, just once. Three of the five cars received upgrades, including fat racing wheels shod with the biggest tires of the day, aggressive fender flares, hoodscoops, additional vents between the taillights, and some experimental engines. The Nassau Invasion in November 1963 was sweet revenge. While Shelby’s Cobra’s got a serious thrashing, Knudsen got a thorough dressing-down from his upper management bosses. It’s amazing that GM didn’t demand the cars be put into the crusher! Perhaps they secretly admired the Grand Sport? 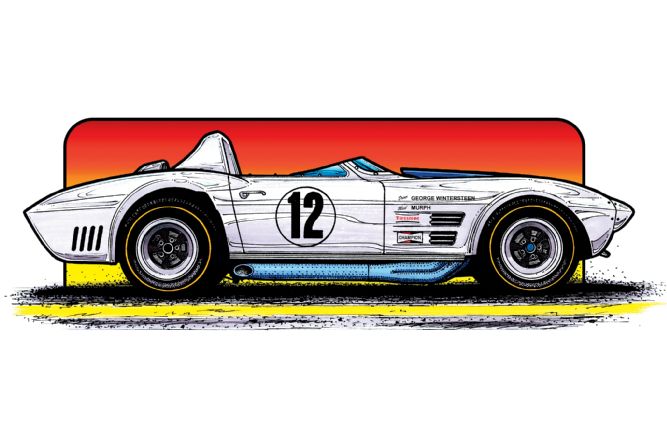 In 1964, Duntov took #001 and #002 and converted them to roadsters to reduce the frontal area. A year later, the never raced #002, equipped with an all-aluminum 377-cid engine with four Weber carbs made an appearance as a Chevrolet show car at Notre Dame University. In 1966, #001 was sold to Roger Penske and was fitted with a big-block 427 at Penske’s shop. Roger raced #001 and his prototype ’66 L88, but by 1966, the GS was obsolete. Penske enlisted driving help from George Wintersteen and after Sebring told his friend that there was another roadster that “might be available.” With inside connections, Penske bought #002 and then sold it to Wintersteen. #002 was taken to Penske’s shop and fitted with a new, blueprinted 427 engine, had the headrest faring removed, the knockoffs replaced with American Racing mags, and painted white with a blue stripe — as the car looks today. Wintersteen said, “I knew it was obsolete in the pro ranks when I bought it. But for that year, it was an economical way to go racing.”

Wintersteen reported “It was quick on the straights, but its aerodynamics were terrible. At Watkins Glen and some of the quick tracks, the front end was getting right up there. It would go down the straights looking like a speedboat. It had good brakes and a locked rearend – we just welded the spiders together. Although it had a lot of power, it was light in the rear end. You would adjust steering with the throttle.” Wintersteen last raced his Grand Sport in June 1966 at Mosport, finishing in Ninth — not bad for a fast old dinosaur. Soon after he sold the car to John Thorne for $6,700. Years later he said, “I wish to hell I still had the Grand Sport.”

Thorne raced the tired old race car a little before selling it to Ed Mueler, who sold the car to Jim Jaeger in 1990. Jaeger’s intention was to restore the car to its 1965 Notre Dame configuration and then run the car in vintage car races.

The original body was too fragile and valuable, so a complete replica body was built while the car underwent a total restoration. The car was never raced but was shown at events as a “vintage Corvette race car.” Eventually, Jaeger decided it was time to sell #002. At the RM Automobiles of Arizona Auction on January 16, 2009, expectations were high, with bidding topping out just under $5 million. But it was a “no sale” because the reserve wasn’t met. Instead of going through another auction, Dr. Frederick Simeone and Jim Jaeger arranged a private sale by “a favorable combination of trades and cash.” The deal included the fully functional #002, the replica body, the all-aluminum 377 engine and side exhausts, the Halibrand wheels and tires, interior, and other assorted parts.

The running car and replica now reside at The Simeone Automobile Museum in Philadelphia. The functional #002 regularly participates in Simeone’s monthly Demonstration Days. Yes, you can actually see, hear, and smell the Wintersteen 427 L88 Grand Sport Roadster. It’s the loudest car in the Simeone collection and is a sight to behold. 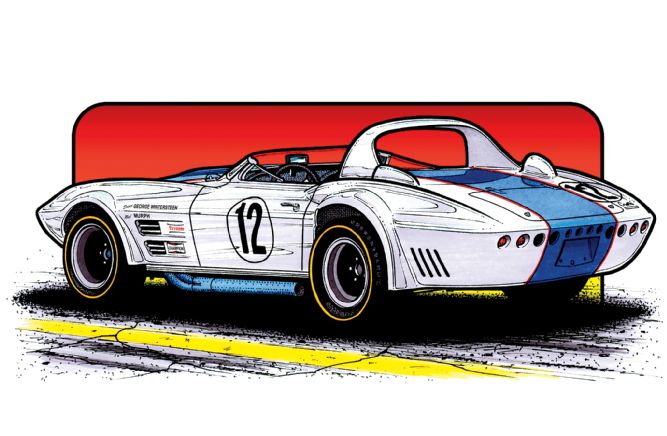