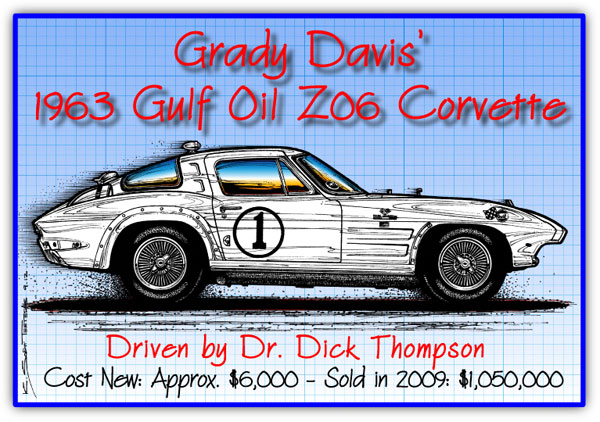 Dateline: 7-20-22 Graphics and illustrations by K. Scott Teeters, this story first appeared in the February 2010 issue of Vette magazine.

Intro: Details keep rolling out as orders pour in for the new C8 Z06 Corvette. The official pricing just came out and the car starts at $106,395 and it doesn’t take much to get past $125,000. Back in 2009, the then-new C6 ZR1 had a starting price of $103,300! I guess it’s the accounting magic of amortization. Let’s continue our look back at the origin and development of the Z06 Corvette.

If you’re ever in the mood for some cheap fun, go to an automotive auction. The auctioneer’s sing-song delivery is designed to get the audience excited, and it works. At these events, it’s not the cars that get revved up; it’s the crowd. In January 2009, attendees of the Mecum Muscle Cars & More Auction got to witness the historic 1963 “Gulf One” racing Z06 Corvette sell for $1.113 million!

While that’s not the highest price ever paid for a Corvette at auction, it was more than enough to drive the audience wild. After all, any time a 46-year-old car that cost approximately $5,975 new sells for over a million dollars, it’s an exciting thing. In addition to the sale, there were three surprises that came out of the auction itself.

The first surprise came in the form of the man who probably spent more time behind the wheel of the car than any other driver, 88-year-old Dr. Dick “The Flying Dentist” Thompson. Mr. Thompson is a man of few words, and when asked about his time with Gulf One, he simply said, “I enjoyed driving this car very much. It sure looks a lot better now than when I was racing. A little work’s been done on it. I had hoped to drive this car at Le Mans, but it didn’t work out that way. It would have done real well, I think. It was a great car to drive.”

Pardon us, Dr. Thompson, but did you say, “Le Mans”? That was the second big surprise. Z06 authority Eric Gill presented a newly discovered internal Chevrolet document indicating that the Gulf One Z06 was indeed slated to be raced at the French event in 1963. In the end, GM decided to enforce its ban on racing, killing the Le Mans project.

The new Sting Ray with its racer kit was supposed to keep the Corvette in the winner’s circle the way it had been for the three previous years. But there was a problem in the form of the Shelby Cobras. In retrospect, the two cars should never have been in the same class, given the Cobra’s 1,000-pound weight advantage. 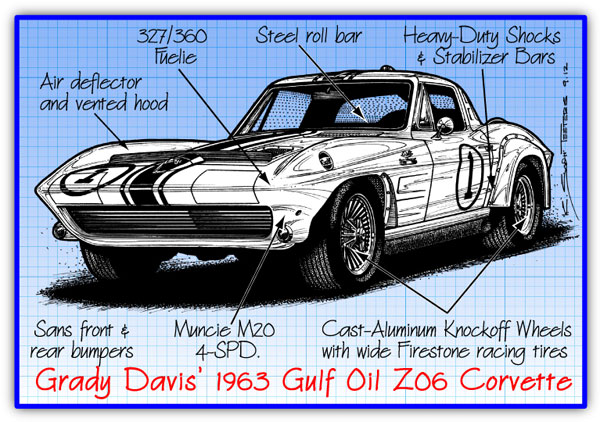 Despite creditable performances in SCCA A/Production racing by the Grady Davis–campaigned Gulf One Corvette and others, the Cobras stole the Sting Rays’ thunder. But Duntov knew how to take care of his best racers. Of the 14 Z06 cars assigned by Duntov to be loaned to select teams, Davis received two. The Gulf One car illustrated here saw more track action than any of the other “assigned” Z06s. The car’s first outing was at the 1963 Puerto Rico Grand Prix, where Thompson drove it to its first class win.

In January 1963 Thompson won at the Refrigerator Bowl in Marlboro, Maryland. The car was then prepared for FIA rules, to race at the Daytona Continental and Sebring. Thompson drove it to Third overall and First in GT3 at Daytona, but the transmission broke at the Sebring race in March. Thompson went on to score wins at the SCCA’s President’s Cup race in Marlboro; in the A/Production class at Danville, Virginia; and at Road America in Elkhart Lake, Wisconsin. 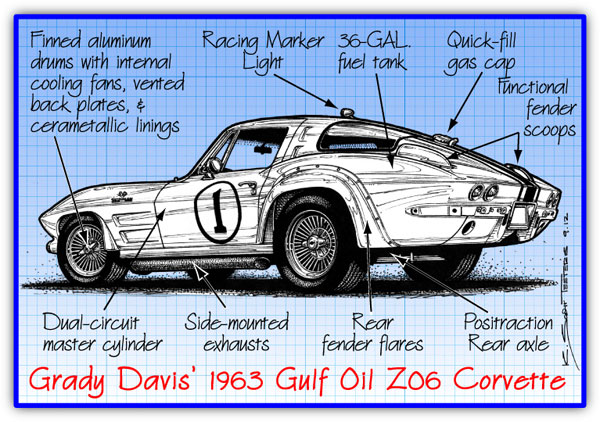 Like most race cars, the Gulf One 1963 was bought and sold many times. Interest in the 1963 Z06s was pretty much gone until the moniker came back in 2001. Today, the Gulf One 1963 takes its place in the Survivors Club of Corvette-racing history. – Scott