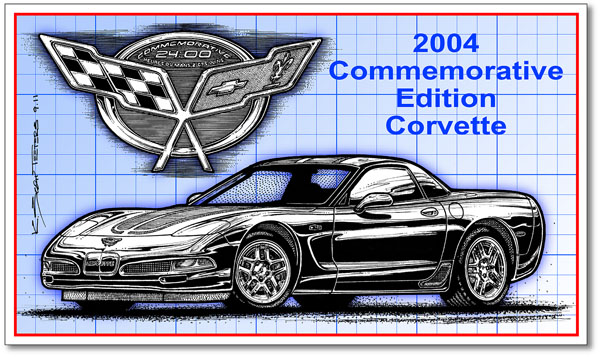 Dateline: 9.18.22 – This story and art were part of my Illustrated Corvette Series for VETTE magazine. The C5 Z06 was the “to-die-for” performance Corvette. To celebrate the Corvette Racing Team’s astonishing success against the world’s best sports race cars, Chevrolet offered the Commemorative Edition option. The unique Special Edition available on the 2004 Corvette Coupe, Convertible, and Z06. Chock full of goodies, the Z06 version had some extra-special, advanced features that arguably made the car the Ultimate C5 Corvette! Let’s have a look-see! – Scott

It all goes back to one man’s passion for racing

Zora Arkus-Duntov was the only executive at GM to have raced a car at Le Mans, where he enjoyed class wins in 1954 and 1955. Duntov took his passion and experience and poured it into Chevrolet’s beauty queen, the Corvette, and elevated the car to legendary status. 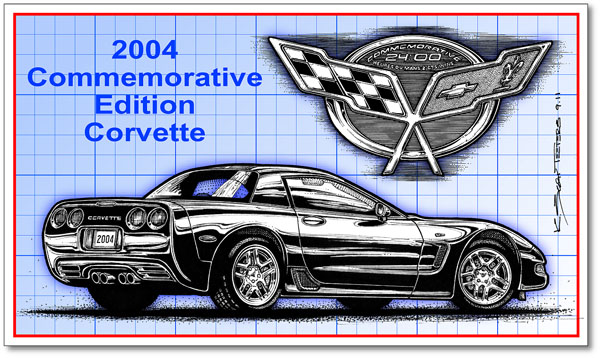 Duntov had the kind of expertise that only comes from putting it all on the line in a four-wheel drift. Throughout the Corvette’s development, he always had racing on his mind. Bill Mitchell called this quality “having gasoline in your veins,” and in Duntov’s case, it showed. No sooner had he stuffed the new 265 small-block into the 1955 Corvette than his secret plans were hatched to build the first Corvette Le Mans racer, the Corvette SS.

It’s hard to imagine how Duntov kept the program secret from the GM brass for so long. But when the Corvette SS went public in 1957, management came down on him like an avalanche. The project was shelved, though fortunately SS Racer car and mule car escaped the crusher. Two years later the mule chassis was used for Bill Mitchell’s Stingray Racer. Both cars survive today!

Duntov was tasked with production Corvette development but was able to create a program to supply special parts for private racers. In 1960, with backdoor help from Duntov, sportsman Briggs Cunningham built three Corvettes to race at Le Mans. He won 1st in his class and 8th overall. 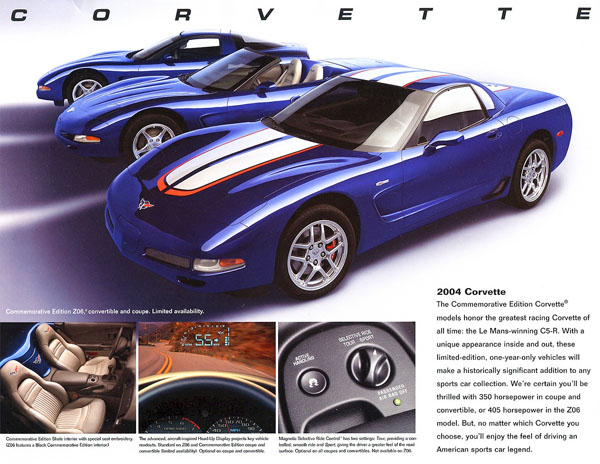 Then, in 1963, Duntov tried to sneak his lightweight Grand Sport Corvettes past the higher-ups. When word of the project leaked out, plans for a production Grand Sport were shelved indefinitely. Duntov spent the rest of his career improving the Corvette and providing privateer racers with as much help as he could.

In 1967 Dick Guldstrand and Bob Bondurant took an L88 Corvette to Le Mans. The team would ultimately drop out with mechanical problems, but not before the car had hit a top speed of 171-mph! Then, in 1972, John Greenwood and Dick Smothers raced the BF Goodrich ZL-1 Corvette at Le Mans, dropping out after 10 hours. Greenwood was back at Le Mans in 1976 with his “Batmobile” wide-body Corvette but was out after five hours. 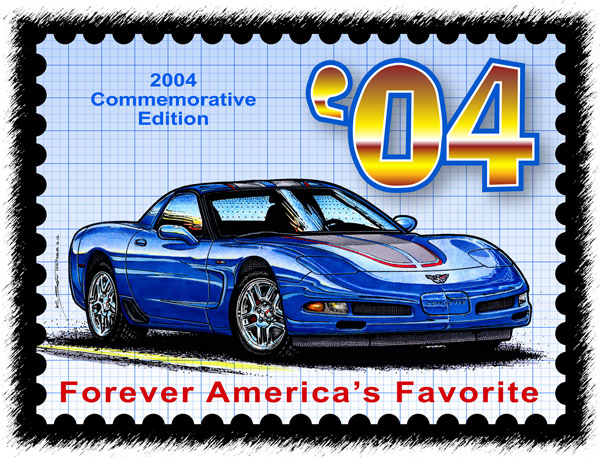 Enter the Corvette Racing Team and the C5-R

There wasn’t another major Corvette effort at Le Mans until 1995 when Reeves Callaway’s cars grabbed 2nd and 3rd place class wins. With the C5 selling well and a new attitude towards racing inside GM, Corvette fans saw the first factory-supported Corvette racer in 1999, in the form of the C5-R. After two years of sorting out the car, Duntov’s dream of a Corvette winning at Le Mans came true in 2001. The C5-R repeated the feat in 2002 and 2004. The 2004 season was the best to date, with ten 1st place wins in ten races!

To celebrate the success of the C5-R Corvettes, Chevrolet offered the Commemorative Edition option on all 2004 Corvettes; coupes, convertibles, and the Z06. The paint scheme and stripes were based on the 2003 C5-R cars, and every available performance and luxury feature was included. This was a $3,700 option for the coupe and convertible, and a $4,335 option for the Z06. A total of 6,899 units were built, accounting for 20-percent of all 2004 Vettes.

All Commemorative Edition Corvettes had the special Le Mans Blue paint, crossed-flags embroidery on the headrests, polished aluminum wheels with unique centers, and special emblems. The Z06 version had a carbon-fiber hood that saved 10.6 pounds and polished Z06 wheels with special caps. The coupe and convertible had a two-tone shale interior, while the Z06 cars had a black interior.

Commemorative Edition Corvettes often are parked together at Corvette shows making for an impressive display. While it took 48 years to win at Le Mans, it was worth the wait. We owe it all to one man’s vision, many years ago. – Scott