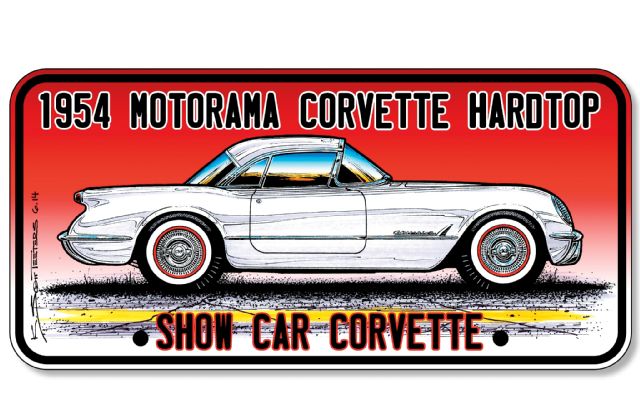 Words and Art by Scott Teeters written for Vette Magazine and republished from SuperChevy.com. Read the other experimental stories HERE.

General Motors makes hundreds of kinds of cars and trucks. Some sell hundreds of thousands of units a year, which makes Chevrolet’s Corvette a complete enigma. Given the small number of Corvettes sold every year, it is a modern American manufacturing miracle that the model has survived for 61 years.

The Corvette was “officially” born on January 17, 1953, at the GM Motorama Show at the Waldorf Astoria Hotel in New York. To understand the impact of Harley Earl’s two-seater sports car concept, you have to look at typical cars of 1953. The car was low and sleek, and wasn’t over festooned with styling gimmicks. Based on the response from attendees, Chevrolet rushed the car into production, and the rest is history.

Today, the Corvette is GM’s flagship car. When Chevrolet unleashes a new Corvette the automotive world stops to take notice. But things were not always this way. Up until the release of the C4 there were many inside GM that wanted to see the Corvette go away. For the first 20-some years, the car suffered from an identity crisis. Inside GM there were always those that wanted the Corvette to be something different; a lightweight sports car, a mid-engine car, a rear-engine car, a four-seater personal luxury car, powered by a boxer-type flat-six, Wankel rotary-powered, turbocharged small-displacement hemi-headed double-overhead cam powered, and even an all-aluminum car. Chevrolet kept the loyal Corvette faithful stoked with two or three experimental/prototype/show car Corvettes per year. From an enthusiast’s perspective, this was endlessly fascinating.

This is the first part of a chronological look back at Chevrolet’s high-profile experimental, prototype, concept, and show car Corvettes. Some of the cars had exotic names such as Astro-I, Astrovette, and Geneve. Others had experimental prototype numbers, such as XP-700 and XP-882. And some had sexy names, such as Nomad, Mulsanne, Snake Skinner, Mako Shark, and Tiger Shark. In retrospect, a few of the cars were the shape of things to come, but most were simply Chevrolet’s way of saying, “Here’s an idea of something we’re working on.” Either way, it was all a ton of fun!

The ’53 Motorama Corvette was a tough act to follow, but Harley Earl’s designers were up to the task. When the doors opened at the 1954 Motorama at the Waldorf Astoria Hotel in January 1954, Chevrolet had three Corvette variants to show, the Corvette Hardtop, Corvair, and Nomad—a handsome trio!
The St. Louis assembly plant started producing ’54 Corvettes on December 28, 1953. The first batch of ’53 Corvettes were not selling well, with many given away as promotional cars. The biggest complaint was the snap-up clear plastic side “windows.” A fully optioned ’53 went for $3,734, about as much as a four-door Cadillac Sedan.

Customers expected at least glass side windows. And the Corvette only had two options: an AM radio and a heater. The car magazines were rough on the pretty little Corvette. The car took it on the chin for the wimpy six-cylinder/automatic transmission setup, lots of chassis flex, and a drafty driving experience. In retrospect, it could be argued that the ’53 and ’54 models should have been alpha and beta cars built to sort out the entire car. The ’53s had almost zero development time, and the magazines called Chevy on it. 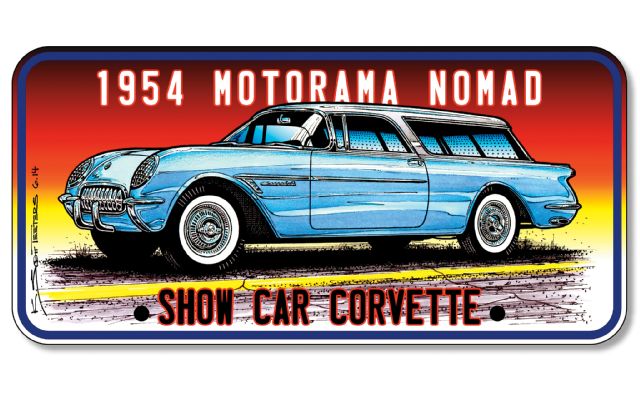 But Chevrolet was listening. An all-out coupe model was never Harley Earl’s intention; after all, sports cars were roadsters. So, to address the snap-up side windows and drafty top, Earl’s designers came up with a nifty bolt-on hardtop configuration. The design so fulfilled its mission that when the Corvette’s first refresh was released as the ’56 model, the hardtop was an official option. For an extra $215 customers could order their Corvette with a hardtop roof that could be bolted and clamped on to the roadster with the soft-top removed or the top down. The bolt-on, removable hardtop concept lasted from ’56 to ’75. The price of the ’75 hardtop option was only $267. So, the ’54 Motorama Corvette Hardtop gets an A+. The Corvette Hardtop is currently part of a private collection and was being restored as of a few years ago.

Chevrolet wasn’t the only GM division that was showing Corvette-like designs at the 1954 Motorama. Also on hand were the Pontiac Bonneville Special, the Buick Wildcat-II, and the Oldsmobile F-88. While each had their own unique look, when seen next to the ’53 Corvette it was obvious that they were all derivative of Earl’s original design. Chevrolet wasn’t about to let their brother GM divisions get all the Motorama attention.

1950’s car styling has often been called, “the era of excess,” mainly due to the copycat explosion of fins. The Pontiac, Buick, and Olds Corvette variants were classic ’50’s schmaltz—over-festooned and over-baked by about 20 percent. Not so with the Corvair and Nomad. Far from being boring-looking, these cars were sleek and clean. Each could have been plucked off the Motorama floor, given a window sticker, and dropped onto a car dealer’s showroom floor.
The Corvair name was a combination of Corvette and Bel Air.

The application of the fastback roof was so clean that it looked like that’s the way Harley Earl designed the car from the beginning. Remember, the ’50s was Detroit’s Jet Age (that’s what the fins were all about) and the Corvette did not escape fins, abet tiny fins around the taillights, called “winglettes.” But the very back of the fastback was total Jet Age styling. The coved-out area in the back that housed the license plate was supposed to look like a “jet fighter exhaust port.” (Okay.) 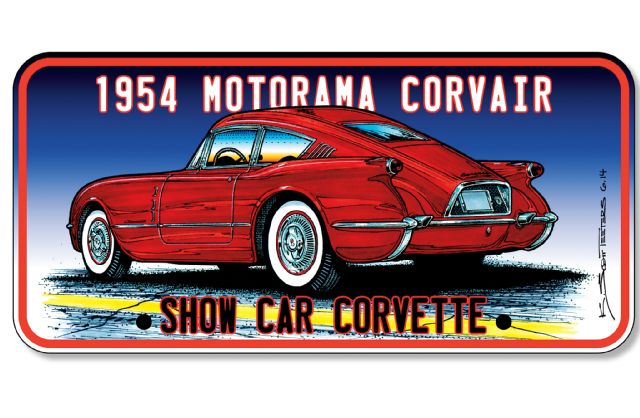 The Motorama Corvair was painted bright burgundy red and then repainted ’50’s-style Sea Foam Green for the March 1954 Los Angeles Motorama. Had the Corvette not been refreshed in ’56, the fastback design from the Corvair show car might have worked in the marketplace. However, styling was changing at such a rapid pace there’s no way the original Corvette design shape would have lasted in the marketplace. I would give the ’54 Motorama Corvair a B+ for its very clean design. Only one Corvair was made and was allegedly seen in a Michigan salvage yard in the late ’70s. However, a GM worker claims the car went to the crusher.

Unlike the Pontiac, Buick, and Olds ’54 Motorama cars (Corvette wannabes), Chevrolet designers did something totally unique, and in retrospect, way ahead of its time. Using a 115-inch wheelbase Chevy station wagon chassis, Earl’s designers and stylists took the complete ’53 Corvette design and stretched it. From the front cowl and windshield forward it was a production Corvette. Then the doors and back end were stretched to fit the 9-inch longer chassis. The rear fenders were straight off the ’53 Corvette.

The ’54 Motorama Nomad was one of those designs that just looks right at first glance. Obviously not a sports car, the Nomad was a balanced blend of trim sports car styling with the full utility of a station wagon.

“Practicality” was a big sales feature in the ’50s. The interior was well thought out and looked “production.” The tailgate had a dash-mounted release and an electric rear window that went down when the gate was unlocked. The interior had a fold-down rear seat, a ribbed headliner, and the upholstery was finished in white and blue leather.

The Nomad was a beauty and I can imagine that Chevy reps at the Motorama show must have had a lot of visitors offering to buy one. However, in the real world outside the Motorama, there was no market for a smallish, six-passenger station wagon. In fact, the Corvette-based Nomad was a total teaser car. By the end of the year, the full size Bel Air-based ’55 Nomad was in Chevy dealer showrooms for just $2,571.

As many as five Nomads were built but only three are known to still exist. Car magazines weren’t permitted to drive any of the Nomads, so there are no reports on how roadworthy they were. Next part we’ll take a look at a few more examples, including the SR-2, Corvette SS, and ’59 Stingray.