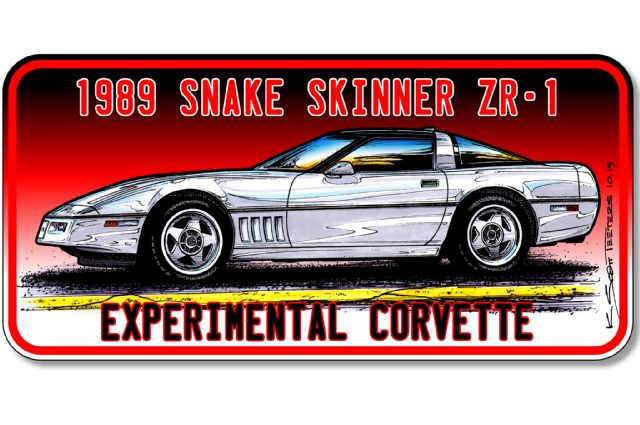 by K. Scott Teeters as written for Vette magazine and republished from Super Chevy
an excerpt from: Trend Setting, Part 14: A look back at Chevrolet’s
experimental, prototype, concept car, and show car Corvettes

Dateline: 12.18.15: It was no secret in 1988 and 1989 that Chevrolet was developing a “super-Vette.” But when the Dodge Viper RT/10, with its 488-cid V-10 engine, debuted at the 1989 New York Auto Show the Corvette guys didn’t know what hit them. The Dodge boys were completely up front as to the source of their inspiration for the Viper—it was the minimalist, ’65 Shelby 427 Cobra. You just know that the Corvette guys went back to their offices, closed the doors and yelled, “What the @$#*!”

The Viper was a beautiful machine, but wouldn’t be available until 1992, whereas the ZR-1 could be purchased as a ’90 model. The Viper was spartan and rough, the Corvette on the other hand had evolved into a Grand Touring car—fast and powerful, designed for long-distance performance driving. Corvette Development Manager John Heinricy took a proactive stance with a lightweight engineering study car—just in case a “Viper-killer” was needed.

The first and more serious challenge was that the ZR-1 was close to being hit with the gas-guzzler tax, something that was unacceptable to GM. It turned out that the ZR-1’s mileage figures were saved through electronics. Weight reduction would have also fixed the mileage problem, plus made the ZR-1 a better performance car. The second challenge was to maintain the Corvette’s performance supremacy. Corvettes had been dominating the Showroom Stock series, and there were plenty of contenders wanting to take the Corvettes down, but Heinricy would have none of that! 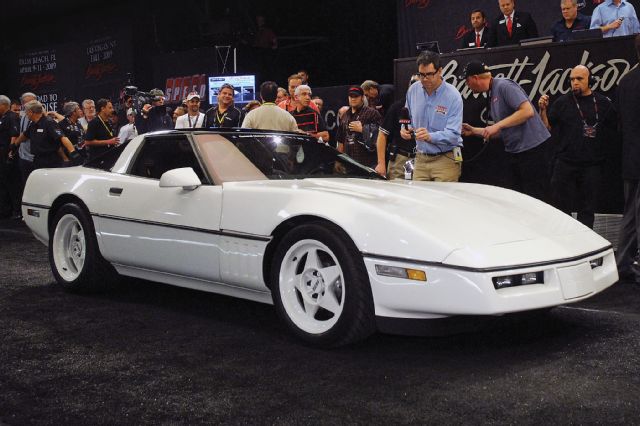 The engineering study used two ’89 ZR-1 pilot cars. Dubbed “ZR-1 SS” (Super Sport or Snake Skinner), the first phase was weight reduction. All “GT” items were removed: air conditioning, stereo sound system, low tire-pressure system, spare tire, the power leather seats were replaced with cloth-covered manual seats, and cast-magnesium Dymags replaced the standard ZR-1 wheels. The stock flywheel was replaced with a heavier dual-mass unit and the bellhousing replaced with a magnesium version. Other weight-saving magnesium parts included the roof-panel frame and mirrors. Brake rotors and framerails behind the rear axle centerline were made from aluminum. The above items removed about 250 pounds, taking the weight down from 3,479 to approximately 3,229. The LT5 engine received modified camshafts and Walker DynoMax mufflers replaced the stock catalytic converters. This is how the car was first shown in late ’90.

By mid-1991, Snake Skinner had some more grunt under the hood. The LT5 engine now had ported heads, more aggressive camshafts, an increased plenum, and larger throttle body barrels. Morrison four-into-one headers were added and the resonators were removed. The stock 3.54:1 rear gears were replaced with a 3.91:1 gearset for quicker acceleration.

More weight was trimmed by replacing the rear glass with plexiglass and the front end received a new Kevlar hood. The headlights were removed and their covers riveted shut and mini quad headlights and turn signals from a Pontiac Grand Prix replaced the stock units. A larger, special baffled gas tank was installed to prevent fuel starvation.

For some added visual difference, Corvette engineer Scott Leon added the four-louver vents from the Corvette aero kit and added ’92 LT1 exhaust outlets. The software for the FX3 Selective Ride and Handling option was modified, but the springs were unchanged, causing the car to sit a little high due to the reduced weight. Between the modified LT5 and the removal of another 100 pounds, the ZR-1 SS was ready for some serious testing.

The Snake Skinner was eventually lightened to 2,700 pounds with Heinricy blasting the 427 Cobra’s 0-100-0 record of 14 seconds down to just 12.8 seconds! Here’s where shaving weight gets serious and well on the way to being a race car. Mercury Marine built a special, black crinkle-finish LT5 engine with advanced cam timing, modified intake throttles with balanced ports and steel tube headers. Initial dyno runs rated the modified 350-cid engine at 440 hp, but was later rated at 475 hp. Since the ZR-1 SS wasn’t a “production” car, that time wasn’t considered a record.

John Lingenfelter and Doug Rippie both received all of the statistics needed to build their own Snake Skinner LT5 engine. The stock LT5 engine was 350 cid and rated at 375 hp in 1990. The tuners’ stroked 368-cid version with all of the above modifications dyno’d to 565 hp. A supercharged version would have been at or above the C7 Z06’s LT4 engine—24 years sooner!

So why didn’t Chevrolet offer the Snake Skinner to the public? Several reasons. The most obvious reason was cost. At around $63,000, the ZR-1 was hyper-expensive for its day. A Snake Skinner would have cost a lot more. Another factor was the modified LT5’s extreme horsepower. The base Corvette had 250 hp, the ZR-1’s LT5 engine had 375 hp. Offering a 565hp Corvette in 1990 was way beyond “too much.”

In January 2009, the Snake Skinner sold at the Barrett-Jackson auction for $176,000, while a lesser-developed Snake Skinner sold for only $73,700. Both cars were “well bought” as they say at the auction. Either way, two people now own one-of-a-kind R&D Corvettes that will only become more valuable in the years to come. In another time, development cars such as these would have been sent to the crusher. 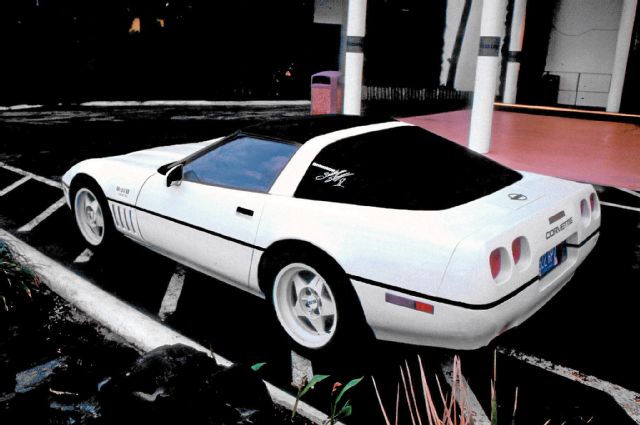