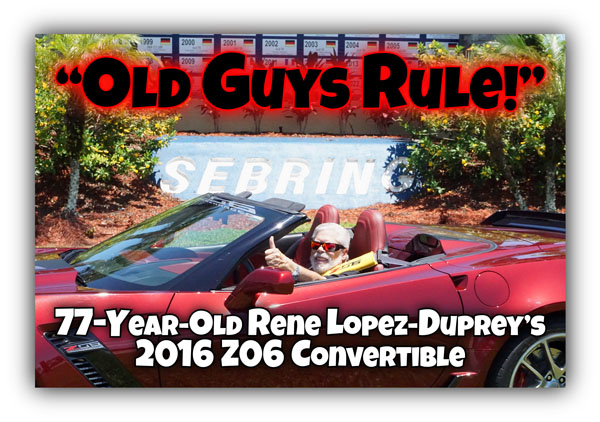 It took a long while for Rene Lopez-Duprey’s to get into a 2016 Z06 Corvette. But the wait was worth it!

Dateline: 5.17.22 – This story was originally published in the August 2019 issue of Vette Vues Magazine – Every Corvette fan and owner has a “Corvette moment”. I’m preaching to the choir here, but you know what I mean; that moment of demarcation when a Corvette grabbed your attention and you were never quite the same.

Corvettes have been around since 1953 and for most of us; Corvettes had been on the road for a good long time before we noticed. That moment could have been when a neighbor, family, friend, or co-worker got a Vette that made us ask, “What’s that?!” That moment can happen at any stage of life and all that’s important is that it happens.

How Does This All Get Started?

For me, I was just 11-years-old, so I had to wait a while. Our Young Lion Corvette friend, Dean Kaliakmanis was born into a Corvette household and started with a basket case Corvette. For 77-year-old Rene Lopez-Duprey, a Corvette didn’t take residence in his garage until he was in his ‘60s, but that’s not when the romance began.

Rene recalls, “It was in late 1963 or 1964 when I was in college and one of my fraternity brothers had a ’63 Corvette Sting Ray convertible. I was driving a 1.8-liter Triumph Spitfire sports car, a fun car, but after my fraternity brother took me for a ride in his Vette, my Triumph was never quite the same. The Corvette made such an impression; I never forgot it, even into my 60s. Since my first ride was in a C2, I always liked them best, but they are so expensive these days and the newer ones are so good. And that’s how the seed was planted for me.”

It took over forty years for the seed to sprout.

In the meantime, Rene went on with his life that included family obligations, and a long and varied career that included large construction project management and real estate. Along the way, Rene had a hot Mustang and his brother was into Porsches. Rene was looking for something more than the Mustang, but affordable.

In 2007 a friend at a local Chevrolet dealership called Rene because he knew that Rene was interested in Corvettes. The dealership had just acquired a unique Corvette and the salesman thought Rene might be interested. 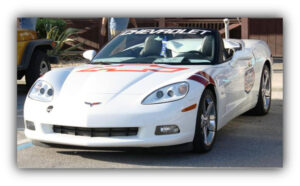 Parked at the Fort Meade, Florida dealership was one of the 2007 Daytona 500 Corvette Parade Cars. There were a total of 33 Parade Cars, all white convertibles with a Chevy bow-tie logo on the hood and a “Chevrolet” sun shadow at the top of the windshield.

Each of the 33 drivers in the race got to drive a Parade Corvette during the event. Every car had a decal on the back with the driver’s name, the car Rene was looking at said, “D. Gilliland” on the back.

Rene recalls, “I went to the dealership and fell in love with the car! It only had 160 miles on the car, but because the car had worked at the race, the dealer couldn’t sell it as a “new” car. I just thought it was the coolest thing I’d ever seen, the price was right, so I bought it.” 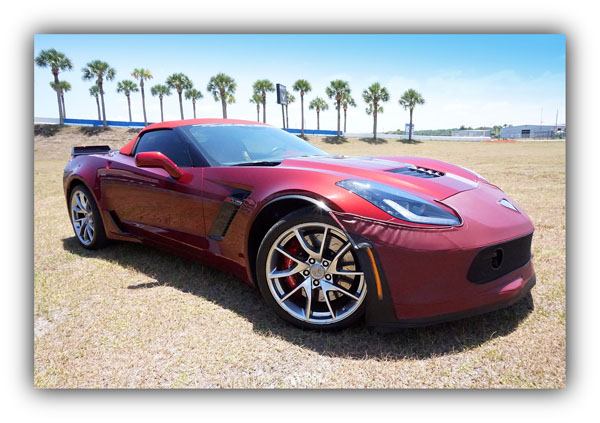 When Chevrolet released the C6 Grand Sport, it was a stroke of genius. For around $6,000 extra, customers got a base model Corvette with the Z06 widebody with dedicated front fenders and wheels, plus the upgraded Z06 suspension and brakes. You can even argue that the C6 Grand Sport helped save the Corvette.

As much as Rene loved his 2007 Daytona 500 Pace Car, when he saw a 2013 Crystal Red Grand Sport convertible with a beige top and white Grand Sport fender hash marks; he had to trade up. 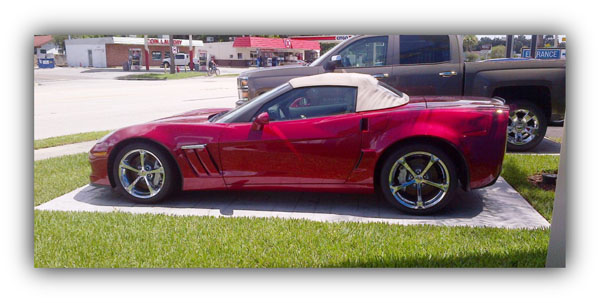 Like many modern Corvette owners, Rene likes getting a little more from his Corvettes by using a few Old School hot rodder tricks; improved intake and exhaust. These are two of the oldest tricks in the books that still apply to modern performance cars.

Although, at this date (early June 2019) we are seeing reports that tuners will not be able to do their magic because the mid-engine C8 will have an encrypted ECU (Electronic Control Unit) with tight security protocols to thwart attempts to modify the unit’s codes.

(Update: Recently there have been a few reports that a few computer-savvy tuners HAVE been able to get into the coding) 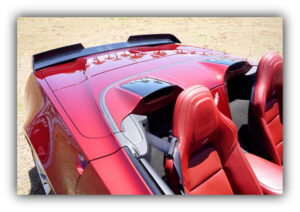 We’ll see, but for C4 to C7 owners, tuners can work wonders. Rene’s ’07 Daytona Parade Corvette and his ’13 Grand Sport both received a low-restriction cold air intake and performance cat-backs. His ’07 Corvette had a set of MagnaFlow mufflers and the ’13 Grand Sport had a set of Billy Boat cat-backs with the factory NPP Dual Mode Exhaust.

Rene was a happy Corvette owner, enjoying his Corvette convertible in the beautiful Florida climate. There’s nothing quite like top-down motoring in a mostly warm, sunny area. All was well, that is until the C7 Z06 came out. Rene prefers convertibles, so when he learned that the new Z06 was available as a convertible; he just had to have one.

These are on top of the 2LZ package that includes; a Bose 10-speaker stereo system, head-up display, memory package, auto-dimming inside and outside mirrors, heated and vented seats, power seat bolster/lumbar support, advanced theft deterrent, front and rearview cameras, and a universal home remote start. 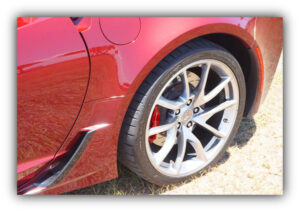 Rene Lopez-Duprey’s performance factory options on his 2016 Z06 Convertible include the Z07 Performance Package and the Magnetic Selective Ride Control. The basic C7 Z06 has more “race car” built into it than any previous Corvette and includes Brembo Brakes and a dry-sump oil system. 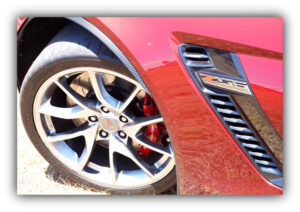 Rene’s C7 2016 Z06 Corvette is a testimonial to what a magnificent car Tadge Juechter and his Corvette team built. Not only is the Z06 Corvette an astonishing track car, but it can also be an outstanding GT Grand Touring (long trips) car. Creature comforts are abundant, and with 15-cubic-feet of storage, there’s plenty of space behind the seats to carry everything a couple needs for a long trip.

Rene and his wife Lucy have taken a three-week, 5000-mile trip from Sebring, Florida to Yellowstone National Park, as well as a trip to the National Corvette Museum in Bowling Green, Kentucky, and a trip to Charleston, South Carolina with the Highlands County Corvette Club of Lake Placid, Florida.

Rene says, “Our Z06 is such a comfortable cruiser, yet despite all the power the car has, thanks to the Active Fuel Management System, at cruising speeds, half the engine shuts off and the car gets close to or over 30-mph.” 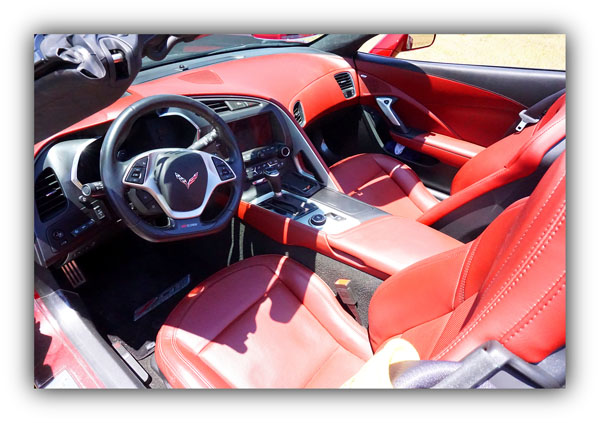 About the only downside to owning a C7 Z06 Corvette is the tires. The Michelin Pilot Sport Cup tires offer extraordinary grip that the car can use all of, and then some, but they only last around 8,000-to-9,000 miles. Rene‘s Z06 now has 18,000 miles and he’s on his second set of tires and will probably be looking for another set soon. Performance has its price. 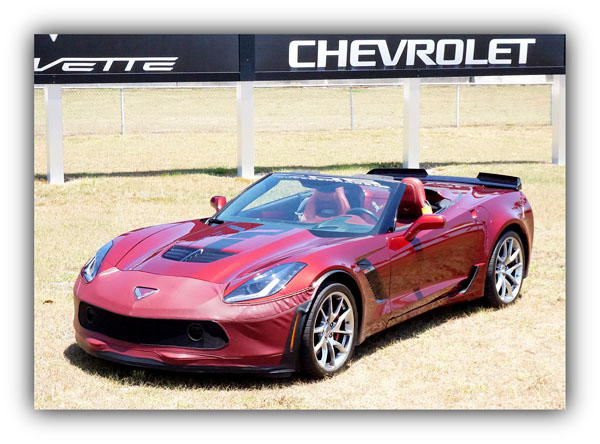 Tires aside, Rene reports that his 2016 Z06 Corvette Convertible is, to this date, his absolute favorite Corvette. He’s not sure about the mid-engine C8, since he and Lucy like taking trips in their Corvette.

With a mid-engine, where do you put your stuff? Two have to travel light; very light! Think “carry-on airline bags. Since Chevrolet won’t be building any more front-engine Corvettes, Rene and Lucy Lopez-Duprey will most likely be enjoying their C7 Z06 GT-type Corvette for many years to come.- Scott