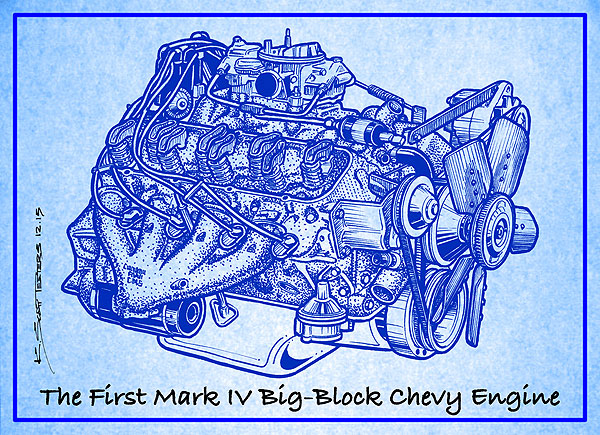 Dateline January 2016: When you think of “big-block” Chevy engines, the Mark IV, aka “Porcupine,” Rat Motor” usually first comes to mind. But the first Chevrolet “big-block” was the W-Series engine that was in production from 1958 to 1965 – only eight model years!

There were three versions: the 348 for light truck use, the 409 for Impalas, and the 427 (RPO-Z11 for drag racing) with 430-hp and an astonishing 575 lb-ft of torque. Even through the number for the Z11 looked good on paper, the W-Series engine just couldn’t compete against the big Ford and Chrysler hemi engines. Chevrolet absolutely needed a new big-block design.

When the Mark IV was completed and released, Chevrolet was forced to adhere to a GM mandate that restricted engine sizes for production passenger cars to less than 400 cubic-inches. The Mark IV was designed and intended to be a 427, so to comply the bore was reduced from 4.251-inches to 4.094. When the big-block was bumped to 427 cubic-inches for 1966, Duntov joked that the reason was the weight reduction of boring out an additional 31-cubic-inches of iron. The man had a sense of humor.