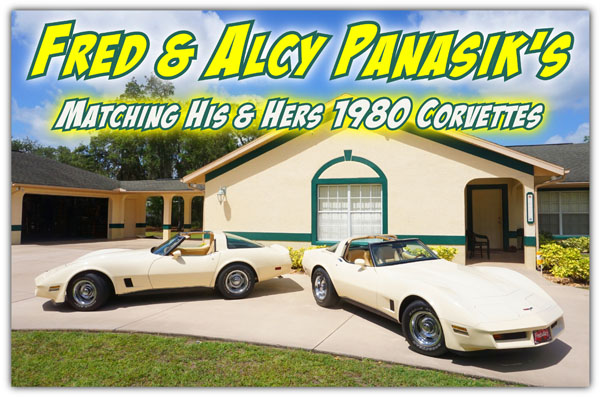 A Most Unusual Way to Enjoy Corvettes!

Chevrolet had a great run with the C3 Shark Corvettes, selling 542,861 Shark-styled Vettes from 1968-to-1982. It all started in the spring of 1965 when then-Chief of Styling, Bill Mitchell showed upper management at Chevrolet his vision for the next Corvette, the Mako Shark-II. As distinctive as the C2 Sting Ray was, the Mako Shark-II was more so. It truly looked like “the car from another planet”. Management was blown away and wanted the Shark as the new Corvette for 1967, a mere eighteen months away!

It turned out that translating the Mako Shark-II’s shape into a car that could be mass-produced was a bigger fish to fry than management realized. The 1967 release date was pushed back to the 1968 model year, and even that was premature, consequently, the first C3s were plagued with all kinds of troubles.

Management wasn’t too broke up about it because the ’68 Corvettes sold a record 28,566 units, but they did take it on the chin, as many road tests were scathing, mostly because of quality control for a premium-priced car. In hindsight, the car should have been released as a 1969 model, but it’s all history now. 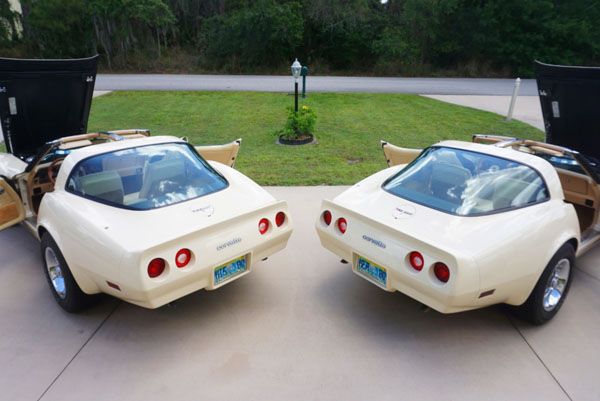 Storm Clouds On the Horizon

The 1969 Corvettes were much better. Various upgrades were implemented and trouble areas fixed. Customers continued to like the new Shark-styled Corvette, setting a big new sales record of 38,762 cars sold. Management was very happy, but there were storm clouds on the horizon. 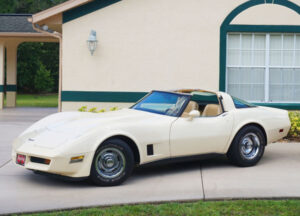 It was almost a perfect storm for lovers of ’60s performance cars with the convergence of three major issues: record-high insurance premiums for performance cars; safety concerns; and exhaust emissions. So just as the Shark Corvette was hitting its stride, the performance car party was over.

1971 Corvettes were de-tuned for lower octane gasoline. In 1972 GM rated all of their engines in terms of “net” horsepower, as opposed to “gross” horsepower. Engines tested for “gross” horsepower did not account for real-world things, such as a fan, an alternator, hot under-the-hood air, an exhaust system, etc. The numbers chilled enthusiasts and somewhat turned down the heat from insurance companies. 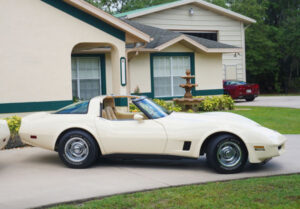 The 1972 LS5 454 was rated at 270-horsepower and the LT1 rated at 255-horsepower. In 1973 and 1974 crash bumpers and steel side door beams arrived, adding weight to the car. Between the choked engines and added weight, “high-performance” was a memory.

All this did not go unnoticed by Fred Panasik. The Brooklyn native-born had been captivated by Corvettes as a kid when he first saw the 1963 Sting Ray. Corvettes have a way of doing that, as most of us can concede. A high school class in aviation mechanics got Fred started with how machines work, but when it came time for his first car, Fred’s Mom and Dad said, “No Corvette!”, so a 140-horsepower Corvair got him started. After graduating in 1965, Fred relocated to South Florida and worked as a welder, in construction, and in sheet metal work. 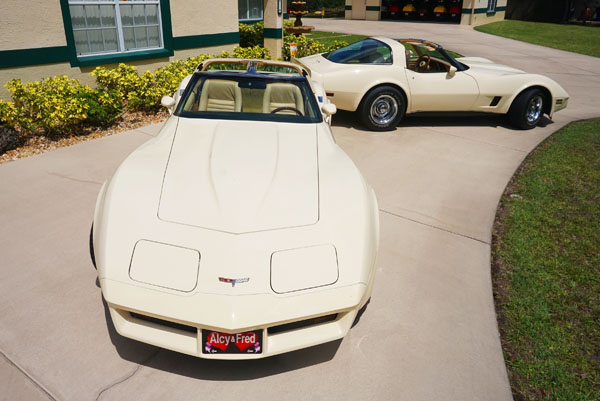 Early in 1970 Uncle Sam caught up with Fred and he was drafted into the Army where he was trained as a Radio Telecommunications Specialist and was sent to Korea. Eighteen months later, Fred was honorably discharged, late in 1971. As a result of his military training, Fred decided to go to college for Business Management, earning a two-year Associates Degree.

Aside from cars and business, Fred always wanted to learn to fly, so he went for training to get his private pilot license, then took advantage of his G.I. Bill that paid ninety percent of his advanced pilot training. By 1977 Fred got his commercial license and started his short career as a mechanic with Eastern Airlines. 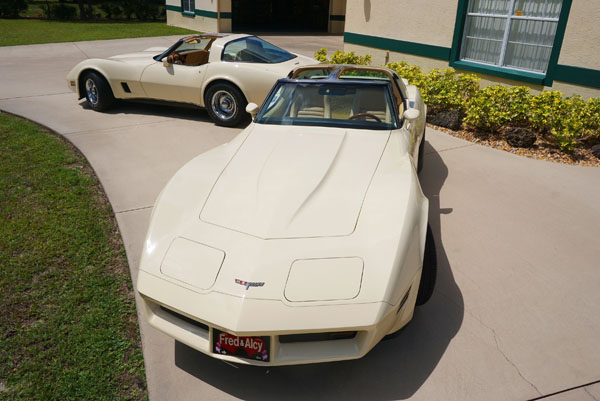 The late ’70s was not a happy time in America. The nation was suffering a bad handover from the Vietnam War, the first Arab Oil Embargo, Watergate, lack-luster presidents Ford and Carter, Rock’n Roll was waning, Disco was on the rise, a second Arab Oil Embargo, a deep recession, and run-away inflation. Yet GM was selling stacks of Corvettes!

Because of the crummy economy, Fred got laid off in 1974, with little prospects for another flying job. He was working in Hollywood, Florida real estate when someone suggested he apply for a job with the U.S. Postal Service, later in 1974. This worked out great for Fred and his future wife, as it provided him with steady employment for twenty-eight years as a Letter Carrier.

Meanwhile, Back In the Corvette Inner Sanctum

Inside Chevrolet, Corvette Chief Engineer Dave McLellan and his team were working on two major projects, the Bowling Green assembly plant and the upcoming C4 Corvette. While all this was going on, McLellan had to keep the Corvette fresh. The roll-out of styling changes started with the new fastback roof in 1978, followed by optional front and rear bolt-on spoilers in 1979. For 1980 the Corvette received a new aerodynamically-improved front bumper cover, a new rear bumper cover with an integrated spoiler, a new hood, and new front fender vents. 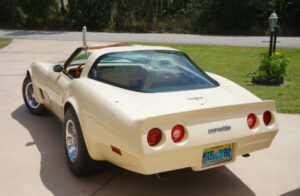 The new look was bold and fresh, although power hit a low point of 190-horsepower with the base engine and California buyers got a 180-horsepower passenger car 305 engine. 1980 was the last year for the “performance” L82 engine (230-horsepower) and in 1981 there was no performance engine option.

And for the final year of the Shark, there was no four-speed transmission, but the 200-horsepower 350 engine had rudimentary fuel-injectors inside the Rochester Products Throttle Body Injectors mounted atop of a modified 1967-1969 Z-28 duel-quad cross-ram aluminum intake manifold. Technically, the 1982 Corvette was a “Fuelie” but not your grandfather’s Fuelie Corvette. 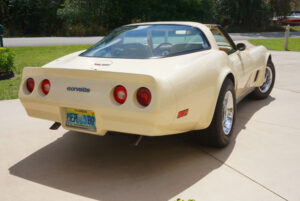 By the end, Corvette was a solid, well-established American cultural icon, and Fred Panasik and his soon-to-be wife Jean, wanted not just a Corvette, they wanted his-and-her Corvettes!

It’s Finally Time To Get a Vette!

Late in 1979, just after the 1980 Corvette came out, Fred and Jean started looking for a dealer in south Florida that would give them a deal on two Corvettes. Because Corvettes were in demand, many dealers were marking up their Corvettes, but Sark Chevrolet Center, in North Miami Beach, Florida was willing to make a deal. Fred and Jean got $1,000 off the MSRP, a pretty good deal, all things considered.

The cars were ordered on October 15, 1979, both were built on January 4, 1980, and delivered to Sark Chevrolet Group on January 31, 1980. Even though Fred and Jean’s Corvettes are identical, the last three VIN numbers are, “302” and “320”. Fred inquired as to why their identical cars were separated by seventeen numbers. The answer was that other colors and optioned cars were being built that day.

Paint quality was a constant issue for St. Louis Corvettes and Fred and Jean’s cars had less than satisfactory paint. Sark Chevrolet Group agreed to repaint both cars and charge back to Chevrolet $1,200 for each car. Unfortunately, when the cars were repainted the shop did not use a flex agent, so it wasn’t long before the paint on the soft bumper covers began to crack. By 1982 Fred replaced the flexible bumper covers with fiberglass pieces from Eckler’s and both cars were repainted again.

Fred and Jean’s Corvettes have been lovingly cared for, enjoyed, and have had pampered lives. From the beginning, both cars were daily drivers but at the end of the day were put to bed in separate garages that were attached to the house they lived in. Both cars have never been in an accident and have never been raced. The engine, carburetor, transmission, and drivetrain are all-original. All mechanicals have had basic maintenance. 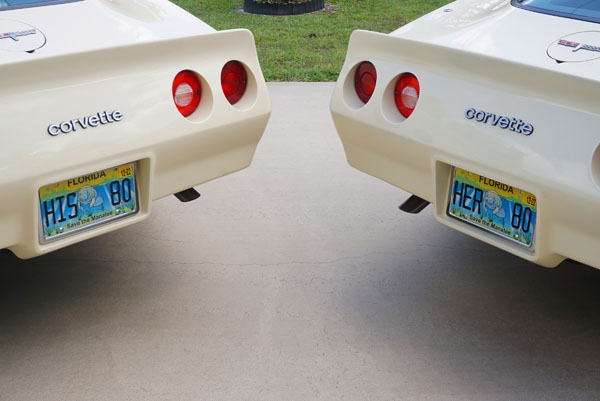 Fred has all of the original paperwork; the order forms and window stickers; all of the titles for both cars; owner’s manuals; all official Chevrolet paperwork; 1980 brochures; a 1980 dealership display board showing color samples of available exterior and interior colors; a dealership salesman’s catalog showing options, physical interior color samples, paint chips, available options, and technical details; and lastly, a dealership display poster.

Additionally, Fred has a complete collection of every Corvette brochure from 1953 to the 2022 Z06! He even has a 1980 Chevrolet Salesman’s Price Guide that lists every model, option, and prices for every vehicle Chevrolet offered in 1980. That’s something you never see!

Fred Gets “Personal” With Their Corvettes

Personalizing Corvettes has been going on since 1953. Although Fred and Jean’s twin 1980 Corvettes are mostly stock, Fred started personalizing his and Jean’s Corvettes right from the beginning, but it’s all “dress up” stuff. Each car has been modified exactly the same and Fred has stored all of the original parts, plus various spare parts such as floor mats and steering wheels.

The cars interior’s both feature burlwood center console plates and instrument plates with matching wood steering wheels. The original AM/FM Stereo with an 8-Track tape player bit the dust long ago and was replaced with a Blaupunkt AM/FM Cassette tape player. In the ’80s a Blaupunkt cassette tape player was THE hot setup. The center arm-pad is a cushioned unit that matches the leather seats. Everything else in the interior of both cars is the stock Beige leather seats.

Corvette owners typically want three things when it comes to personalization. They want: more rumble (that’s what all the cat-back systems are about), more grunt (that’s what headers and low-restriction intakes are about), and more bling. Since Fred and Jean’s corvettes were never intended to be anything but sweet cruisers, they opted for some under-the-hood bling, consisting of chrome dress-up pieces, including; chrome distributor shields, chrome master cylinder covers, a chrome alternator, and bracket, various chrome emissions control plumbing, hood latch brackets, and braided stainless steel radiator hoses. 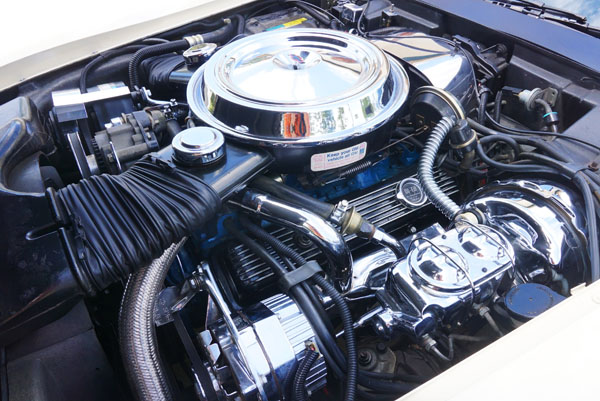 The under-the-hood of both cars sparkles. On the underside, Fred had the stock exhaust system replaced with a stock-like stainless steel system. Not only do both Corvettes perfectly match, but Fred keeps the odometer readings the same. As of this writing, both odometers read, “24,024.0” miles. I suggested that the next odometer milestone could be “24,240” miles. And the Corvette garage is air-conditioned at 78-degrees in the warm months.

Fred and Jean relocated from Danai Beach, Florida area to Sebring, Florida in 2002. Sadly, Jean passed in 2010. Fred met Alcy, a practicing doctor from Columbia in 2011, and were married in 2018. As you can see from the photos, Fred and Alcy’s garage isn’t just a place to store the matching Corvettes, Fred has an astonishing collection of Corvette die-cast cars, plastic models, photographs, and radio-controlled cars, dealership memorabilia, and posters. 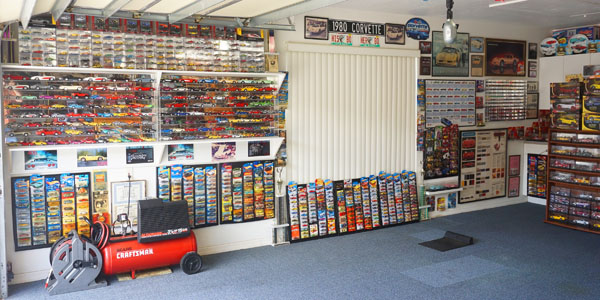 The Corvette garage is just one of his three garages. The second garage stores their 2003 Lexus SL430 and 2004 Mercedes SL500. Fred’s third garage houses his collection of before-mentioned 1953-2022 Corvette brochures, as well as a collection of Honda motor scooters and a Vespa scooter (all on trickle chargers with personalized license plates), vintage Schwinn bicycles, and hand-made car and truck memorabilia from their many trips to Columbia to visit Alcy’s family. 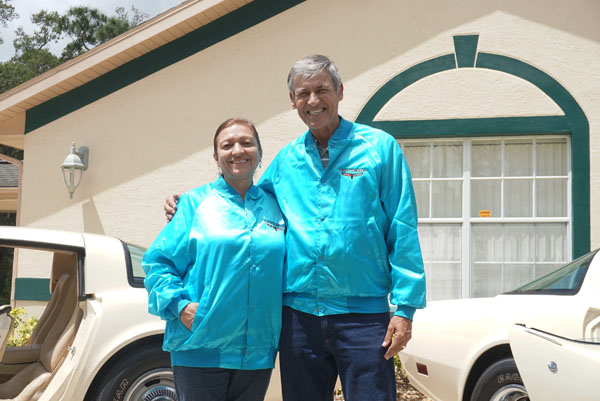 Fred is a member of the Highlands County Corvette Club (http://www.HighlandsCountyCorvettes.com) which has lots of C5, C6, C7, and C8 Corvette owners. It’s a great group of guys and gals with Corvettes from all eight generations. One thing is clear; there are many ways to enjoy Corvettes, and Fred and Alcy are totally happy with their vintage, 1980 Frost Beige Corvettes. Their twin Corvettes couldn’t have a better home. – Scott