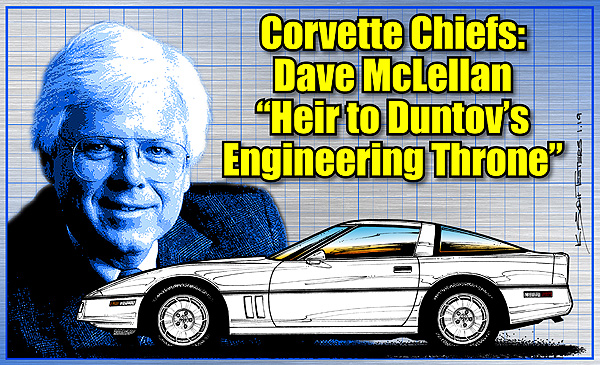 When Dave McLellan took over as Corvette’s new chief
engineer on January 1, 1975, it was whole new world. The prevailing trends went from performance cars to safer cars with reduced emission. Not even Duntov could have made a difference in the ‘70s. But as performance went down, Corvette sales went way up! The sales department was happy, but the Corvette was really getting old. Dave McLellan was an unknown to the Corvette community and many wondered what he would bring to the brand. It turned out; he brought a lot! Read More

Hanspeter Bohi from Muenchenstein, Switzerland builds a spot-on replica of the most important concept Corvette ever! Dateline 2-4-18, Photos by Hans Peter Bohi and GM Archives – This article first appeared in the April 2018 issue of Vette Magazine. The 1965/1966 Mako Shark-II set down the basic look and proportion for all Corvettes going forward.… Read More

After numerous prototype layouts I settled in on “America’s “Old Glory” Sports Car”. The first one was kind of easy, but once layout completed, I knew I had a ton of work ahead of me. What started out as a fairly simple idea turned into my Project for 2017! And now, it is ready to present.

As of this announcement, we have “America’s Old Glory” art print layouts of every year Corvette from 1953 to 2017. Soon I will be adding the 2018 Corvette, as well as the upcoming ZR1 and Mid-Engine C8 Corvette when it is released next year.

Each print measures 11×17 and is printed in full-color on mat-finished heavy card stock, and signed and numbered by yours truly. Every print is shrink wrapped on 12×18 cardboard so that your print arrives flat and clean. Price – just $24.95, plus $6.95 for USPS Priority Mail shipping. Read More

Thirty-six years ago today Chevrolet released the new 1978 Corvette. Chevy’s sports car was selling well considering the times. Muscle cars were all but dead, gas prices were up to around 75-cents-a-gallon (GOSH!), and the economy was in a slump. However, the Corvette was getting a little stale-looking, so when the ’78 model was released, it was a “WOW!” Read More

Catch to story, plus some awesome artwork! Read More

It’s only been a week or so since the photos of a disguised C7 Corvette surfaced and already the critics are weighing in. One report commented that the profile and proportions look too much like the current C6. And therein lies the designer’s dilemma when it comes to designing a new Corvette. The new design has to “look like a Corvette,” but has to “look new.” This isn’t a new problem actually. But before we come down on the Corvette design team too harshly, we should all just breath… and be patient. Those disguised cars always look bad. Read More

If you have ever considered taking on such a project or wondered what’s involved in building a kit car, we have we got a site for you! Steven has done an astonishing job chronicling the process. I’ll tell you at the outset that the car is about half way to completion, so things still look kind of messy. But, that’s just the nature of this kind of art. I call it “art” because projects such as this require skills beyond spinning wrenches. From start for finish, the process is a series of problems to be solved and creative solutions considered. This is WAY beyond bolting a Meyers-Manx dune buggy body tub on a shortened VW chassis platform. Read More

No sooner had the‘63 Corvette Sting Ray been released, Bill Mitchell was at it again with another one-of-a-kind concept car. Never one to rest on his laurels, (you know the saying, “He who rests on his laurels, gets knocked on their rears!”) Bill went for something really far out. Now, it’s essential to know this first. Mitchell was often the generator of ideas, but didn’t necessarily pen out all of the details. That’s where the “stylists,” such as Larry Shinoda came in. So, if you were a stylist/designer, how’d you like to get an assignment like this… Read More

The Corvette’s tough-guy legend is founded on racing and performance. By the mid-to-late ‘70s, Corvette high-performance and racing efforts were in the pits. Power was down, weight was up, and Porsches were eating the Corvette’s lunch at the race track. The announcement that the 25th anniversary Corvette would also be the pace car at the ’78 Indy 500, looked like the highlight of the decade for Corvette fans. But controversy was in the mix right from the beginning.

Initially, it looked like a triple-play for Chevrolet. First, the ’78 Corvette received a sleek new fastback roof that completed the overall redesign started in ’73 with the soft bumper covers. Second, all Corvettes wore the 25th Anniversary badges. And third, three special Corvettes would serve as the pace cars at the ’78 Indy 500, and replicas would be available. Then the details set in. Read More

Bill Mitchell’s Mako Shark II Corvette show car is arguably THE most important Corvette concept car ever. This car literally changed everything the Corvette had ever been in terms of styling. The design was so fresh, new, original, dynamic, and dripping with sex, it just HAD TO BE the next Corvette. Oh, how I wish I could have been in the GM styling review yard in March 1965 when Mitchell and his team rolled the nonfunctioning Make Shark II out for review to GM’s upper management. Too bad it wasn’t filmed. Management was so blown away they wanted it as the next production Corvette in ‘67!

Check out our C3 Corvette slide show from the 2011 Corvettes at Carlisle Show! Read More