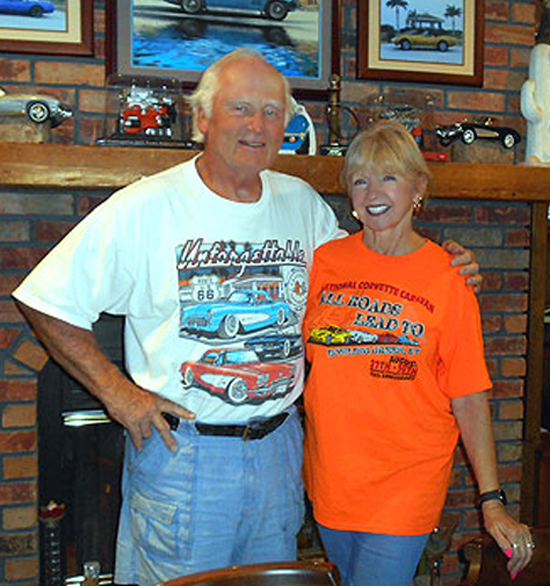 by Scott Teeters as republished from Vette Vues –
You can enjoy Part 2 of the story (Mary Carol’s story) HERE.

For most people, getting a Vette is a “dream come true.” We often hear, “I’ve always wanted a Corvette!” Or, “I finally got my Vette!” For most, that’s it. Check “Corvette” off the bucket list. And it’s usually men, but not always, that lust for Corvettes. Then there are the unusual couples where he has a Corvette and she slowly gets the fever, then they get “his and hers” Corvettes, which is always a delight to see. But that’s not this story. This one is better.

I was talking with a man at a car show in Sebring, FL and told him that I write for Vette Vues and he said, “You know, there’s a guy in Lake Placid that, I think, has one of every generation Corvette!” I thought, “Whoa! I have to find this guy.” A few months later when I finally met John Meyerhoff I learned that he did not have one of every generation Corvette, but he’d like to have one of every generation and he’s very close. It turned out that the story was even better because I learned that John and his lady, Mary Carol had at one point TEN Corvettes between the two of them. Their garage is maxed out and they can’t add on to the garage due to local zoning. To get a C7, John decided to let go of his red-on-red 1960 Corvette because it was the roughest riding of all the Corvettes they have. So, now they’re down to nine Corvettes, five are John’s and four are Mary Carol’s. 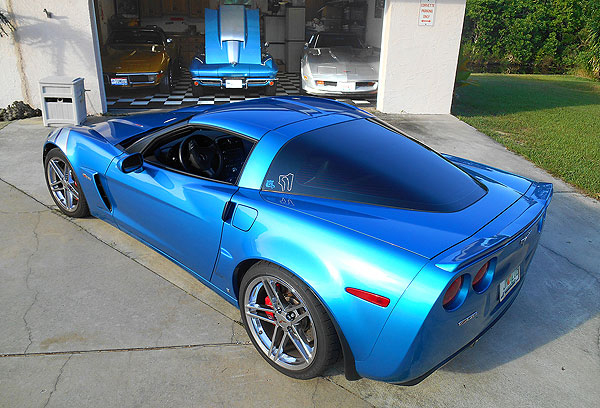 To do the story and cars justice we’re doing this in two parts. For Part 1 we’ll focus on John’s cars, but first there’s the love story, and I don’t just mean for the Corvettes, but for each other and their Corvette lifestyle. Duntov used to say that he wanted “his” customers to ENJOY their Corvettes, and that’s exactly what John Meyerhoff and Mary Carol Plott have done for the last 10 years. Here’s how they met.

If this isn’t “fate” I don’t know what is. It all began in 2005. Mary Carol resides in Lake Placid, Florida and John was escaping the harsh upstate New York winters by staying in nearby Avon Park. At this point, both John and Mary Carol were widowed and have been life-long Corvette enthusiasts. John had his ’96 Grand Sport convertible with him and decided to go to a car show in Lake Placid at the Tower Restaurant (now closed) on Rt. 27. John pulled into the parking lot and looked for a parking spot. Then he spotted a good-looking silver ’81 Corvette with factory side pipes and parked his Grand Sport next to the ’81. And then he saw the owner of the silver ’81, Mary Carol, all decked out in her leathers. John said to himself, “Whoa!”

So they introduced them selves to one another and talked Corvettes through the car show. All the while, Mary Carol’s friends are whispering to her, “Ask him if he wants to go to dinner with us after the show!” Mary Carol said, “No, I’m not going to do that.” Her friends were always trying to fix her up with a “nice guy.” So her friend took charge and said, “John, why don’t you join us for dinner after the show?”

There’s a lot of car show activity in the Sebring, Florida area in the spring, so John and Mary Carol continued seeing each other at car shows. Before they knew it, their mutual love for Corvettes and cars, spilled over and became a loving relationship. Unlike most couples where the husband is the car person and the car stuff is contained in his man cave, you can tell that John and Mary Carol are “car people” as soon as you walk into their beautiful home. As you can see from the photo of John and Mary Carol, Corvette photos of their cars, art, die cast cars and engines adorn the walls and fireplace hearth. What you don’t see in the photo is that in the rest of the living room there are numerous car show trophies, most of which are Mary Carol’s! John says, “Oh, she’s a killer on the details and little touches when it comes to getting one of her Corvettes ready for the show.”

Here’s how John’s Corvette obsession began. In the early 1960s John was an officer in the Navy and drove a 383 4-speed 1964 Plymouth. His best friend and fellow officer, John Tchinski owned a 1963 Sting Ray. The longer John was around his friend’s Sting Ray the more the Corvette was “working” on him. Finally, around Christmas 1965, John ordered a new ’66 427/425 4-speed Mosport Green roadster.

From there, we’ve seen this movie. John meets girl, get’s married, children come along, and its “bu-buy Corvette.” But you never really ever get over Corvettes. By the late ‘70s John got into a ’73 350/250 L82 roadster. Unfortunately, the Corvette fell casualty to a divorce and there were no Corvettes in John’s life for 15 years. 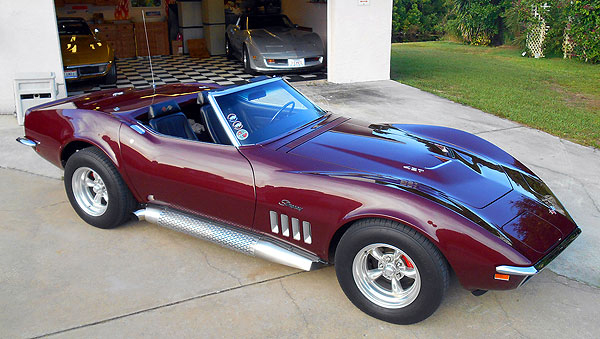 John eventually remarried and by 2001 decided it was time for another Corvette. The C5 Convertible was getting rave reviews so John bought a new Magnetic Red roadster. John found the ’01 Roadster to be a very comfortable road car and started racking up lots of miles. He was also getting close to retirement time. Most of us have a soft spot for our first Vette, so John began searching for another ’66 427/425 roadster. Finding another Mosport Green ’66 big-block roadster was going to be a stretch, but he finally found one that was close enough, in Nova Scotia, of all places. This is the yellow ’66 photographed in the trailer.

During the time of this interview, John was just planning to head north to New York where the summers are much cooler. He also wants to bring his Grand Sport south to Florida on his return trip in the fall. The ’66 427 is not a daily driver kind of car. With no power steering or brakes and a very heavy clutch, it’s a workout, but its all original and somewhat rare. John says, “It’s essentially a show car at this point.”

After full retirement, John’s wife passed and he decided that Corvettes would be his retirement. “I came up with a new goal. I wanted one Corvette of each generation. But I was putting too many miles on the ’01 and happened to find the ’96 Grand Sport Convertible. It was really dumb luck because although I had owned many Corvettes, I didn’t follow the manufacturing of the cars and the special editions, so I really didn’t know what I had, I just liked the color scheme and the fact that it’s a convertible. It turns out that it’s one of four other Grand Sports with the exact same combo of options. Then to fill up the collection, I got the ’69 427 Roadster, then got a red-on-red 1960 Corvette. So, before the C7 came out, I had one of every generation! Then I met Mary Carol. Between the two of us we had 10 Corvettes.” He said with a big smile.

John’s attitude when it comes to his Corvettes is that if a modification will improve the car’s performance or durability and drivability, he doesn’t mind making changes. However, with the ’66 427/425 Roadster, this car is completely stock and John keeps it that way. 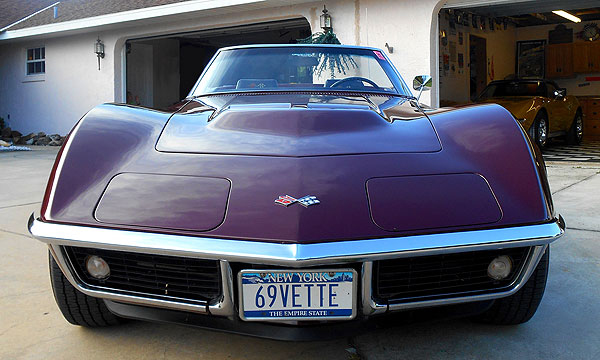 The ’69 427/400 Roadster has numerous interesting changes and improvements. The L68 427/400 is the hydraulic-lifter, kinder, gentler version of the L71 427/435 beast. Few sights in the world of Corvettes are as impressive as the big chrome triangle that hides the 3-2bbl carbs. A roller-cam and Hooker header side pipes really open up the L68 to power levels just above a stock L71. For drivability, John installed a Keisler 5-speed overdrive transmission, and a mono-leaf composite/fiberglass rear spring. The most often asked question John gets about this car are its unique side pipe covers. These are custom made and cover a set of standard Hooker Header-side pipes. The covers are a stylish solution to the age-old problem of burned ankles and pant legs with header side pipe Corvettes.

John’s ’96 Grand Sport is a beauty right off the assembly line. The only thing John has done to the car is replace the mufflers with low restriction units and the stock, dark metal exhaust tips with bright chrome tips.

The 2001 Magnetic Red roadster was the first “new” Corvette John bought since Christmas 1965 when he got his first Corvette. While the car looks like a regular LS1-powered 2001 C5, John has had some goodies added for extra grunt. The old tricks still work. John installed a low-restriction intake manifold, headers, a low restriction exhaust system, and performance chip to keep all the systems working together. The LS1 comes from the factory rated at 350-hp. After the performance parts were added, the engine dynoed at 442-ph at the crank and 372 at the rear wheels. John says, “The kick REALLY comes in above 5000 rpm.”

And lastly, John’s ’08 Z06 looks like another strikingly good-looking Jetstream blue C6 Corvette, but under the hood the 505-hp LS7 has received a few improvements. The intake and exhaust manifolds are low restriction and John installed a performance chip. On the dyno, the modified LS7 pulled 585-hp at the crank.

John Meyerhoff has had a very interesting career as a Navy officer, a basketball coach, the executive director of Phi Kappa Tau, and CEO of the Creative Education Foundation, a non-profit organization devoted to fostering innovation, creativity, and problem solving.  John is definitely enjoying his retirement with his Corvette gal, Mary Carol.

For next month’s story,  we profile Mary Carol’s lifelong passion for cars and Corvettes. Her drag racing days may be behind her, but now Mary Carol and John enjoy many long-distance trips and participate in lots of Corvette shows and caravans. – Scott

You can enjoy Part 2 of the story (Mary Carol’s story) HERE.

When you subscribe, you get a free t-shirt along with your 12 issues! 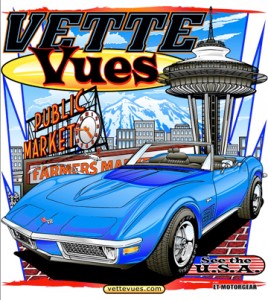