The January 2011 issue of VETTE Magazine is out (I know, I know, it’s only the beginning of November) and in my Illustrated Corvette Series No. 163 column I have covered the one and only, 1978 jet turbine-powered Corvette. The world’s ONLY jet-Vette is alive and well in an undisclosed location in Ohio. This is a story of unbridled imagination. Enjoy! – Scott

Detroit in the 50s and ‘60s was a time of “let’s try it” thinking. GM tinkered with the turbine-engine Firebird I, II, and III cars in the ‘50s. Chrysler had been making turboprop engines since before WW II and started their turbine car program in ‘54. Turbine-powered race cars showed up at the Indy 500 in ‘62 and ‘66, with little success. But it was the red STP-sponsored, Andy Granatelli car that stunned everyone in ‘67. By the end of the second turn of the first lap, Parnelli Jones took the lead until rain stopped the race. The next day, Jones picked up where he’s left off, leaving everyone far behind, until lap 197 when a $5 transmission ball bearing broke, putting the car out of the race. Granatelli was back the following year, but restrictions placed on his Lotus-built turbine car ended the Indy 500 turbine experience forever.

In the ‘70s, Vince Granatelli (Andy’s son) had a shop in Van Nuys, California called, “Pit Stop Service” specializing in one-of-a-kind cars. Granatelli had always wanted to build a turbine-powered street car. One day in ‘78, Granatelli’s wealthy friend, Herb Orlowits asked him to build him “something really fast.” With four turbine engines in his shop left from the Indy car project, Granatelli quickly determined that the only car with a long enough long enough front end to accommodate the long Pratt & Whitney ST6B engine, was a new Corvette. The other factor was that the stock suspension and drive train was already a proven high-performance design.

The long engine necessitated the removal of the entire front body substructure, rendering the nose as just a shell. Using his skills as a race car builder, Granatelli built a special subframe to replace the removed factory structure. Over-sized NASCAR disc brakes were installed to handle the unusual mode of driving the car. A stock Turbo 400 automatic transmission with a beefed up drive shaft and 3.03:1 gearing handles the turbine’s massive torque. Because the turbine spins at 37,500 RPM, a reduction gearbox was used to bring the RPMs down to a manageable 6,230 RPM. To disperse the tremendous heat from the turbine, Granatelli built a flat box that covers the entire bottom of the car, with exhaust exiting through a narrow slot that runs the width of the back of the car.

The completed car was a beauty and graced the cover of the November ‘79 issue of Motor Trend. With a silver and black paint job similar to the 25th Anniversary Corvette and wide strips that run over the hood, blacked out windows, and spun-aluminum wheels, the car looks like a mildly modified ‘78-’79 Corvette. The only non-stock body part is the modified hood with it’s done moved forward for engine clearance and slots to vent hot air.

Mr. Orlowitz was not disappointed. His car ran the quarter-mile in 12-seconds flat, at 111-mph. With over 1,100 FT/LBS of torque instantly on tap, the car would PULL like a freight train at any speed. Since the car will do 60-MPH with the engine idling, to drive, all one has to do to move forward is let off the brakes. Step on the throttle, and HOLD ON for a torque ride.

Orlowits eventually sold the car and by the time the current owner, Cliff Martin from Ohio, came along, the car had been sold and bought a few times. Like the previous owners, Martin doesn’t drive the car often because of the inconvenient startup procedure and nonstop cop-bait. When a car sounding like a jet whooshes by a police officer, they want a look-see.

When executives from Pratt & Whitney learned of the Jet Vette, they offered to rebuild the engine in exchange for having the car to display. The engine received a full restoration and was giving hot laps at the Pratt & Whitney open house! The Jet Vette brought P&W more news, TV coverage, and PR than anything they’d ever done before.

Martin describes driving the car as not what you’d expect because of the turbine lag. But once it starts pulling, hold on. Everything in the car still works and is the way it was when Granatelli built the car. Aside from the car’s unusual features, Martin says its very much like a hot rodded late-’70s Corvette. One of the former owners expressed interest in buying the car back. Not yet, but maybe someday, it will be someone else’s turn to experience the world’s only turbine-engine-powered Corvette. – KST

Prints of this car are available here…
http://www.illustratedcorvetteseries.com/1978_Corvettes.html 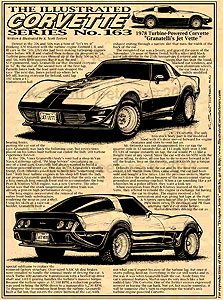 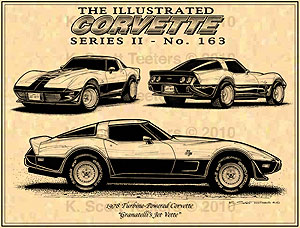 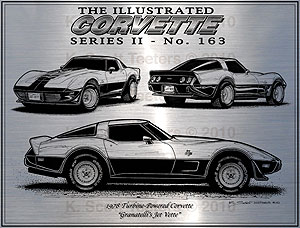 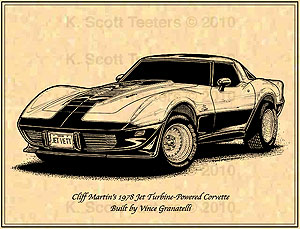 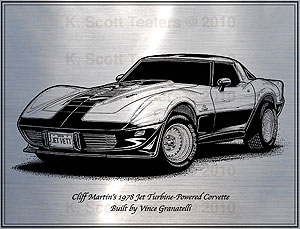