When it comes to skid-pad figures, Corvettes have been in “exotic territory” since 1984!

Dateline: 11.29.17 (Photo GM Archives) – Thirty-five years ago the statistical benchmark for performance sports car handling was getting as close to, or over the magical “1 g” mark on the skid pad. So when news broke that a development Corvette had gone past the 1 g mark, the rumor mill kicked things up a few notches, because the only machines that were in the 1 g territory were racecars, and perhaps a few exotic streetcars.

When the new 1984 was finally released into the hands and lead feet of magazine road testers, the numbers weren’t over the magic 1 g level, but here’s what Car and Driver had to say, “The road holding on this new machine is so advanced that we recorded the highest skidpad lateral acceleration — 0.90 g — ever observed with a conventional automobile by this staff. That figure practically trivializes the previous high-water marks, in the 0.82-g range, generated by such exotics as the Porsche 928 and assorted Ferraris.” (Take THAT Germany and Italy!)

Today’s performance benchmark is 0-60 in the 2-second zone. So far only a few modern streetcars are capable of that head-swimming feat. Chevrolet has published that the C7 Z06 Corvette is a proud member of the 2-Second Club, clocking in with a time of 2.95-seconds and a quarter-mile time of 10.95 (your results will vary depending on driver skill, wits, nerve, and road conditions) Chevy also claims that the new Z06 can hammer the g-meter up to 1.20 g! We can’t wait to see what the new ZR1 can generate on the skid-pad!

Let’s put some additional period dating into the story to show, just how far we’ve progressed. The 1984 Corvette was powered by the 205-horsepower, 350 Cross-Fire Injection engine – a carry-over from 1982 when the same setup used two injectors and a simple computer control system. Car and Driver also reported that the new C4 1984 Corvette had a top speed of 140-mph, 0-60 in less-than 7-seconds, and quarter-mile times of 15.2-seconds at 90-mph. And here’s the kicker, they also said, “In fact, these figures qualify the Corvette as one of the half-dozen fastest production automobiles in the entire world!” – Scott

Actually, we have every year America’s Old Glory Sports Car prints from 1984 to today, HERE. 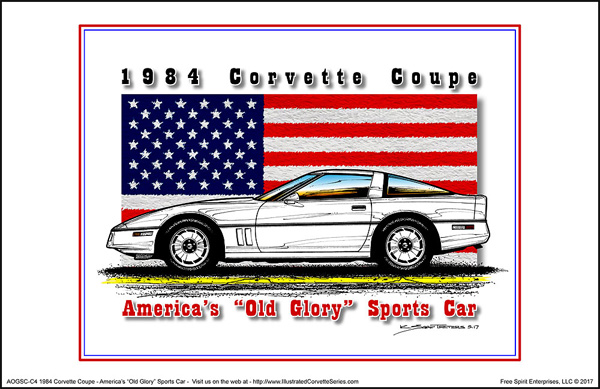