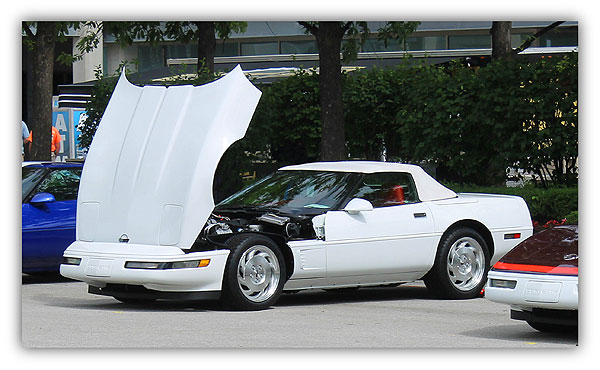 Keeping his 1995 Corvette convertible “factory fresh” and then some!

Dateline: 10-3-18 – The Corvette hobby is a sub-culture of the larger car-culture. Within the Corvette community there are many sub-cultures where owners do different kinds of things with their Corvettes. Some race their Corvettes and within the racer crowd there are different kinds of racing. Some start out personalizing their Vette that leads to all-out custom Corvettes. Others give their Corvette a pampered life with heated and air conditioned garages; the cars never get wet, and are cleaned after every drive. On the opposite side are the Vettes that are driven, repaired, and enjoyed for hundreds or thousands of miles. 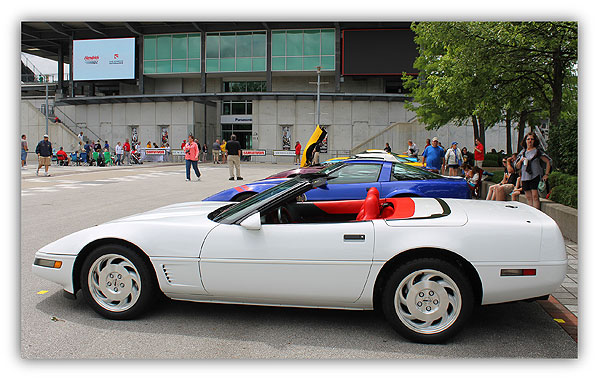 At the extreme opposite end of the daily drivers are the Vette Vues Tri-Power, NCRS Top Flight, Bloomington Gold, and Triple Diamond Award Corvettes. These Corvettes look like they were put into a Star Trek transported and beamed from Bowling Green or St. Louis, directly to the owner’s garage. For Corvette fans that haven’t been to the Bowling Green Assembly Plant and taken the tour, these Corvettes are as close as you can get to “factory fresh.” What every Corvette nitch has in common (besides a passion for Vettes) is that the owners are all enjoying their Corvette in their own unique way. 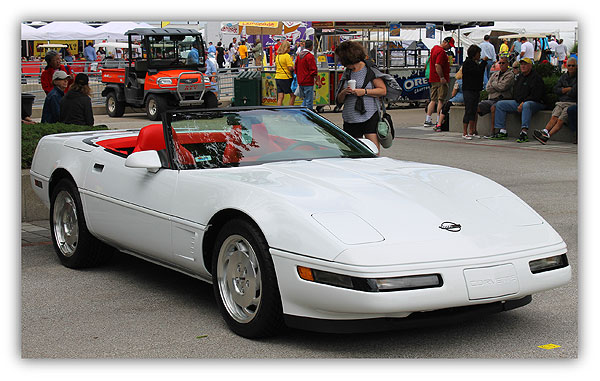 Ed Nieves was like lots of red-blooded American males that have a “Some day I’ll get a Vette!” mental infection. But Life and obligations typically keep the Corvette daydreams way down the list. Ed had the itch we can all relate to. But in 2008 he decided to go for it! 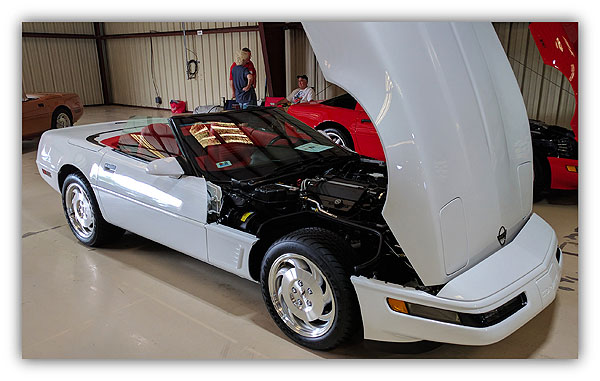 Ed’s “dream Vette” was white with a red interior – just like the first 300 1953 Corvettes. He was willing to go for a C3 Corvette but found very few with the white/red combo he wanted. Ed was hoping to find a private seller, looking for a new home for his baby. As luck would have it, Ed found a 1995 Corvette, with the color combo he wanted, and it was only one hour from where he lives in Miami, Florida. But here’s the big, “But…” The car was up for auction on eBay, which was not how Ed wanted to buy his Corvette. 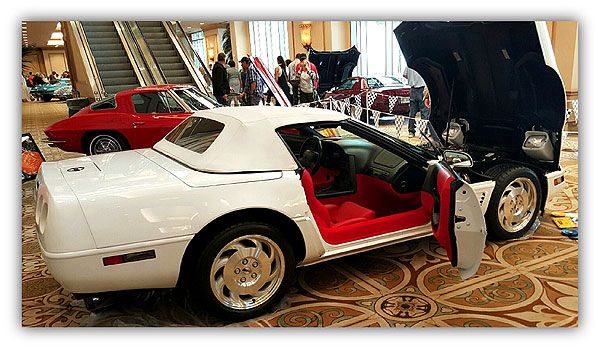 However, the description was intriguing; it read…

“Incredible all original 13-year-old Corvette Convertible still looked like it’s sitting on the dealer’s showroom floor. Everything works to perfection, and this car needs nothing. If you wash it, you might get it dirty.” 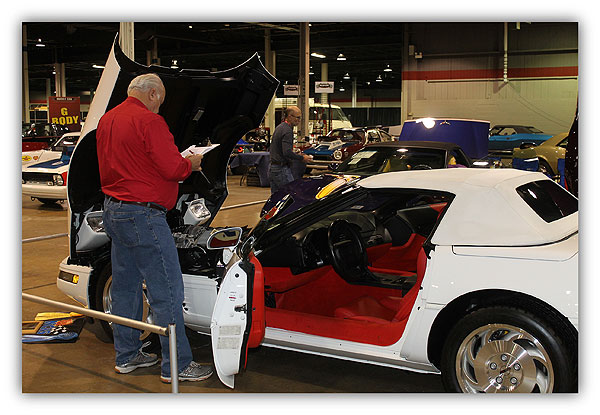 The listing said that the 13-year-old Corvette only had 14,000 miles – very light usage. The more Ed looked at the photos and read the car’s details, the more he knew he had to act quickly. If that’s the color combo you’ve always wanted, and the details were right, who wouldn’t want to check that out if it was only one hour away? 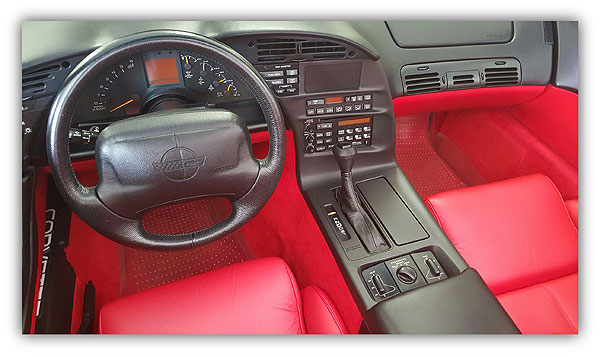 Ed contacted the seller in Fort Lauderdale and arranged to see the car. Upon his arrival, within seconds, Ed knew this was the real deal – exactly the Corvette he wanted! The deal was quickly negotiated and an hour later, Ed had the top down and was heading south to Miami.

As Ed put it, “Of course, I lowered the top and drove her home like I stole her!” Upon his arrival home, Ed tossed the keys to his eldest daughter, Melissa and told her, “Take it for a spin with your little sister!” (Awww, what’a Dad!) 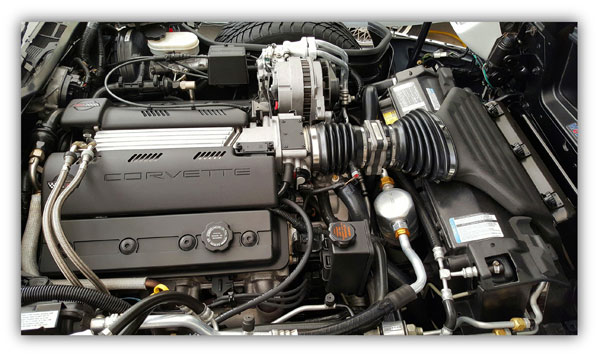 After Ed had the oil and fluids changed and a good tune-up, he drove and enjoyed his white 1995 Corvette convertible, mostly on the weekends. South Florida is a wonderful place for top-down evening cruising. Things cool off, the air is sweet, and the sunsets are spectacular. The car wasn’t “perfect” and needed a few things, but it was all small stuff. Ed was a happy guy! 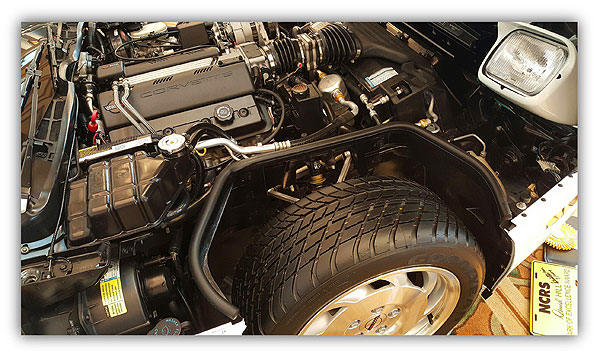 The Sunshine Corvette Club is a Miami-based Corvette club. When Ed decided to attend the club’s Annual Corvette Show, he really didn’t know what to expect. What he found was a great group of Corvette lovers, eager to help one another. Ed also got an experiential education on super-sano Corvettes. Much to Ed’s surprise, his Corvette was awarded 3rd Place in the C4 class. Seeing what the 1st place Class winners looked like, Ed got a clear picture of what he needed to do to get his Corvette up to speed. 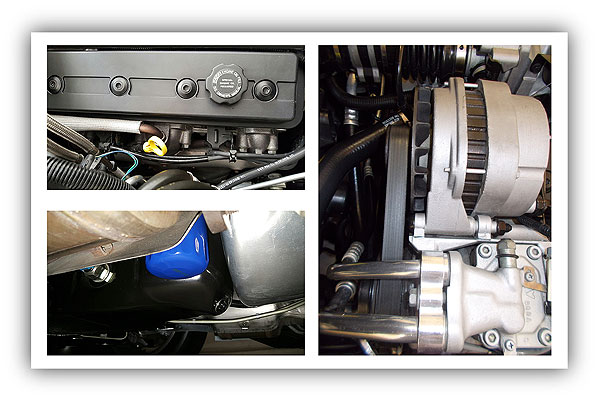 Over the next few years, Ed kept improving the cosmetics of his Corvette and started racking up 1st in C4 Class wins. One day Ed’s Corvette pal, Jack Exter, told him about the National Corvette Restorers Society (NCRS), and that the NCSR Florida Winter Regional Meet in Kissimmee, Florida was to be held in January 2012. Jack could tell that Ed’s Corvette was already pretty well up to NCRA level competition, so once again, Ed jumped into the pool, not really knowing what to expect. Ed explains, “I found myself lost in the world of technical judging. However, after it was over, I was awarded an NCRS Top Flight at the banquet ceremony. This was the beginning of the end for me. I was bitten by the bug!”

In the five years from 2012 to 2017 Ed has racked up an impressive number of awards, including; Four Top Flights, an NCRS Performance Verification Award (which requires every component of the car to work to factory specifications), and an NCRS Hill Mark of Excellence Award (reportedly, only 34 cars have won this NCRS prestigious award).

Ed set his sights on two very special national awards; the Vette Vues Tri-Power Award (hosted at the Corvette/Chevy Expo, in Galveston, Texas) and the MCACN Triple Diamond Award (hosted at the Muscle Car and Corvette Nationals in Chicago). But, Ed learned that he needed to first have a Bloomington Gold Award in order to qualify for the Tri-Power Award and the Triple Diamond Award.

By this time, Ed was a veteran at transporting his Corvette in an enclosed trailed. In 2015 Ed packed up his 1995 Corvette and headed to Indianapolis. The event was spectacular for Ed, as his Corvette scored 99.5 out of 100, and received a Bloomington Gold Award. With a Bloomington Gold Award under his belt, in March 2017 Ed sent in his application for the Tri-Power Award to Bill Wolf, publisher of Vette Vues Magazine and organizer of the Corvette/Chevy Expo in Galveston, Texas.

It is a 1,200-mile drive from Miami to Galveston in a truck with an enclosed trailer, but it was worth the effort. Ed recalls, “The car was placed in the lobby area with the rest the Tri-Power contenders, and it was an awesome experience from day one. We received a Tri-Power Award, a President’s Award (awarded to cars that score above 98%) and won best of class. I was ecstatic with our results, and the judging process was fair and comprehensive. Bill, Bonnie, and the staff put on a spectacular event.” (You can read about the event in the August 2017 issue of Vette Vues Magazine and Ed’s Corvette is on page 7) 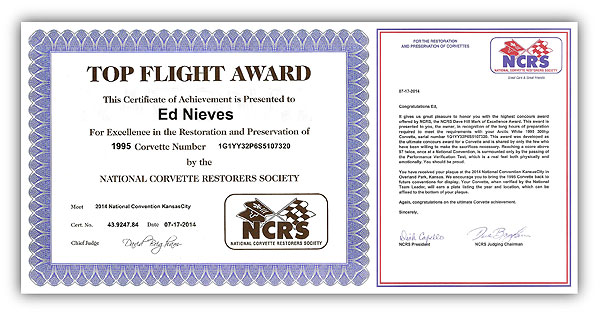 In November 2017 it was time to go for the Triple Diamond Award at the MCACN (Muscle Car and Corvette Nationals) event. Ed packed up his award-winning 1995 Corvette and headed north for the LONG 1,400 miles trip from Miami, Florida to Rosemont, Illinois.. This is the biggest and toughest muscle car and Corvette show of the year and there were approximately 570 pristine cars there. After the judging, Ed’s car received very positive feedback and at the awards ceremony was awarded the MCACN’s Triple Diamond AND Gold Concours Awards! Ed’s 1995 Corvette convertible scored in the high 99-percent range.

When thinking about “competition” Corvettes, we usually think “racing”. But this is a very different kind of competition; it’s about extreme attention to details. Ed’s Corvette went from being a well-kept driver, to an NCRS Top Flight, Tri-Power, Bloomington Gold, and Triple Diamond award-winning car.

Ed Nieves has come a very long way in his journey into the world of Corvettes. He sums it up this way, “I have to admit that it has been a lot of work traveling and attending these car meets throughout the U.S. But the adventures continue to keep me motivated and more importantly, I enjoy meeting new people and saying hello to old friends. My foundation, the United Correctional Officers Federation, is based on the NCRS standard of judging, and I continue to serve as an NCRS judge with the C4 team and assist the Florida NCRS chapter as their newsletter editor. The Corvette that I purchased nine years ago just to drive, turned out to be more, and better than I expected.” 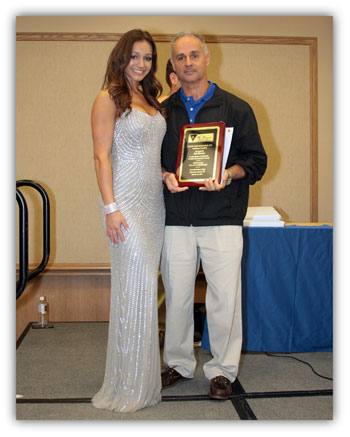 Obviously a Corvette such as Ed Nieves’ doesn’t rack up many, if any, miles on the road any more. Maybe Ed will have to look for a second white and red Corvette driver. If he does, will he be able to keep it a driver, or will the temptation be too great to turn it into another award-winning Corvette? Keep us up to date, Ed. – Scott