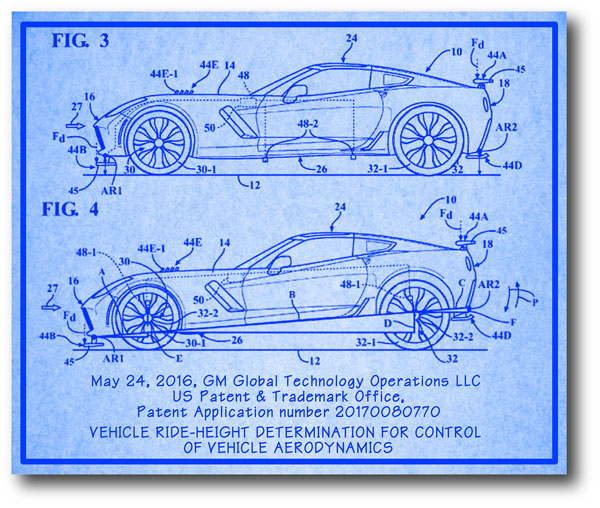 Chevrolet has been extremely tight-lipped about the C7 ZR1, such that we have to look for other sources to glean info. Several months ago, published U.S. Patent documents indicated that GM is working on a new DOHC engine called the “LT5.” The conclusion is that the C7 ZR1 will have a double overhead cam version of the Z06’s LT4. Guestimations are that the LT5-powered ZR1 is pushing 750-horsepower – maybe more!
The April issue of Car and Driver showed artist renderings depicting the ZR1 sporting a very aggressive front splitter, big air intakes, an elaborate new hood, and a very angular rear wing with winglettes. Killer-looking stuff! But wait! There’s more! 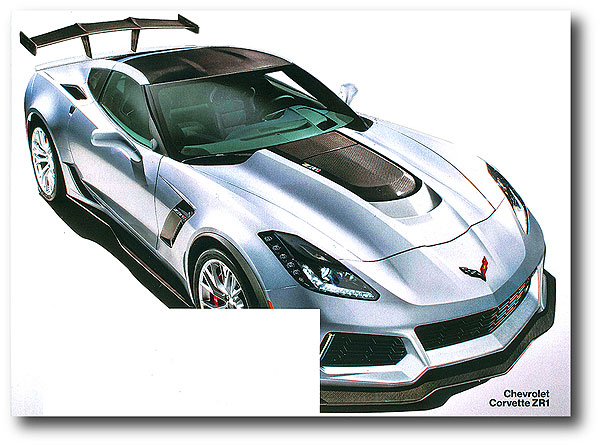 We first heard the technological term “Active” back in 1987 when GM was working with Lotus on an “active suspension” on a Buick Electra mule car. The system was heavy, worked great, and was hyper-expensive. But by 1989 RPO FX3, the “Selective Ride and Handling” option was on the Corvette order form for $1,695. In 1996, RPO FX3 was replaced with RPO F45, the “Selective Real Time Dampening” option for $1,695. This next generation active suspension system used wheel travel sensors and a new Powertrain Control Module. RPO F45 served Corvette customers well until 2003 when the $1,695, RPO F55, the “Magnetic Select Ride Control” was made available. The new system used magnetic fluid shocks that made damping adjustments at a rate of 1,000-per second! 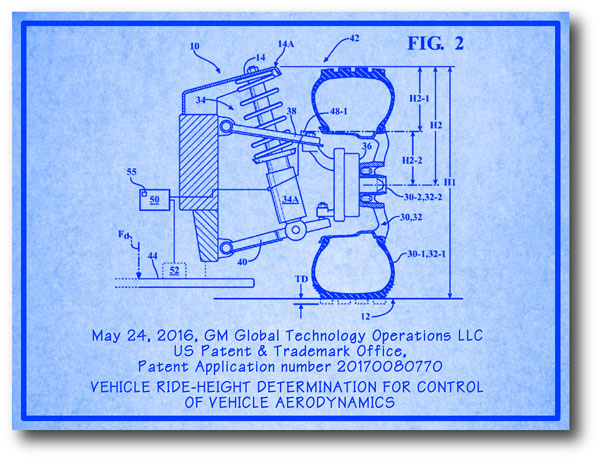 So, it would seem that what electronics did for suspension control might be applied to the aerodynamics on the new ZR1. The Active Aero System will be a concerto of computer-controlled, constantly adjusting hood shutters, movable diffusers, splitters, rear spoiler, ride height, and attitude. The overall system controls the movement of airflow over, around, and under the car, as well as downforce. What ABS and Traction Control, Active Suspension, and Rev-Matching accomplished, Active Aero promises to do for aerodynamics. 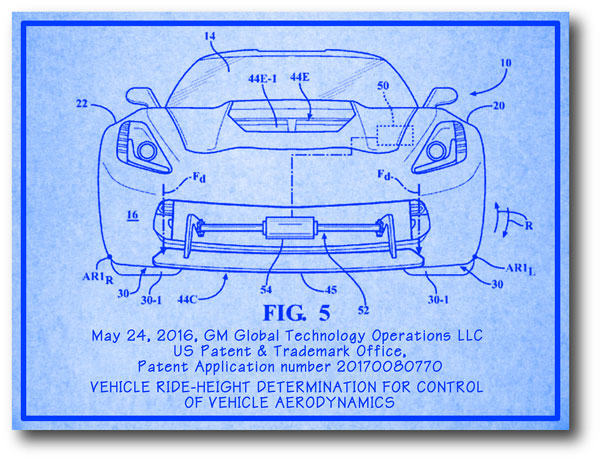 Once you’re aware of this, it makes all previous air-flow management appendages – spoilers, air dams, splitters, side-skirts, and wickerbills look like “dumb” devices. The Z07 option on the C7 Z06 and Grand Sport is serious track car hardware that generates the highest amount of downforce that GM has ever tested on a production car. The objective of modern aero systems is “downforce” to aid traction, to produce better lap times. The downside is some sacrifice of top speed, but for most, these cars are about acceleration and capability, you know, bragging rights.

The 2018 ZR1 was supposed to debut at the Detroit Auto Show in January 2017, but didn’t happen. Since then Chevrolet has been extremely quiet with only a few bones tossed out – the LT5 engine and now the Active Aero System. We can only speculate whether Active Aero will be part of the ZR1 or be “optional”, like the $7,995 Z07 Performance Package. Might there be an Active Aero option for the Z06 and Grand Sport? 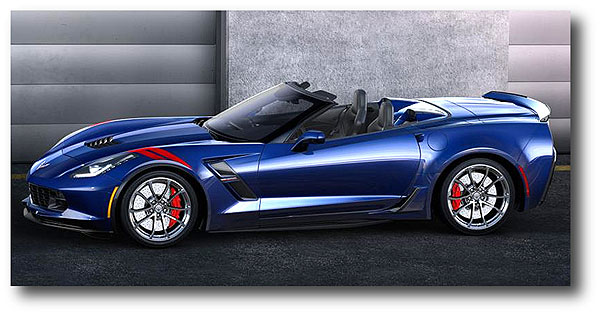 Cost is anyone’s guess, but considering the complexity of an electro-mechanical, computer-controlled “system”, $9,995 wouldn’t surprise me. Cutting edge performance hardware has never, ever been “cheap.” I believe that a fully loaded C7 ZR1 will be astonishingly expensive. Which is okay, because most of the technology in advanced Corvettes eventually trickles down. The base model C7 is more car than any previous base Corvette.

When the Active Aero system becomes available, we will have moved into the era of “Smart Aero Systems.” The olden days of bolt-on appendages will seem as sophisticated as a screw-on side-view mirror. Considering that “spoilers” didn’t start to show up on Detroit performance cars until the 1967 Z-28 Camaro, it took a long time for Corvette customers to be able to buy a new Vette with such goodies. Let’s take a long look back at Corvette aerodynamic devices to put some perspective on the upcoming Active Aero System we will see soon.

1988 GTO Chevrolet Performance Parts Catalog Kit – The cart came before the horse on this one. C4 Corvette never got any kind of formal RPO factory installed spoiler options. However, there was a unique package available through the Chevrolet Parts Catalog. The Corvette GTO Body Kit was only made available so that a “similar style” body could be used on the 1988 Trans-Am Corvettes. The Trans-Am rules stated that a car’s replica body had to be “based on an official offering from the factory.” The fiberglass racecar body was designed first, then a “similar-looking” bolt-on kit was offered through the Chevrolet Performance Parts catalog. The kit consisted of a wrap-around front spoiler that was an extension of the already wedge shape of the C4’s front, a tall duck-style rear spoiler, side rocker skirts, rear skirts, and shark gill-style front fender vents. There weren’t too many takers for the kit.

2006 Z06 – From 1988 to 2006 the only spoiler body kits were the aftermarket kits that looked a lot like late 1970s Pontiac Trans Ams and the 1997 Corvette Tiger Shark concept car. While the C5 Z06 got dedicated wheels, trim, and new side rear brake scoops, it had no spoilers. The C6 Z06 was the first wide-body Corvette since the C4 ZR-1. But unlike the tame-looking C4 ZR-1, the C6 Z06, with its bulging wheel flares, deep front valance, and small front splitter looked like the brute it was. On top of the rear bumper cover, between the taillights sat a small, short, cowlick of a rear spoiler that Chevrolet claimed was good for 100-pounds of downforce. The overall look of the Z06 was so aggressive, no one complained about the demure rear spoiler. Then in 2007 the Corvette Accessory Catalog offered a full-width rear spoiler, similar to the one used on the C6.R racing Corvettes. 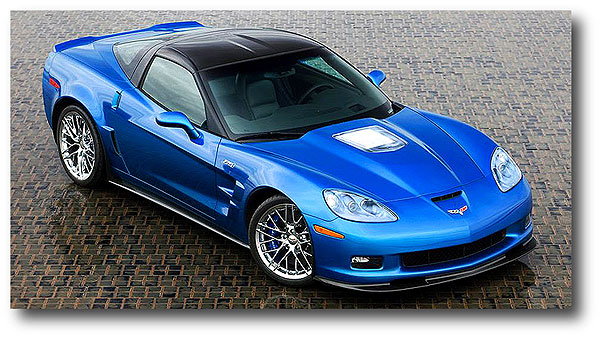 2009 ZR1 Carbon Fiber Ground Effects – The C6 ZR1 was the first bonafide, 200-plus-mph factory Corvette. The ZR1 was dripping with high performance hardware, the most impressive of which was the 638-horsepower, supercharged LS9 engine. The exterior was a level above the already aggressive Z06 and featured an integrated aero system, made in advanced carbon fiber. The system included; a deeper, extended front splitter, side skirt rockers that extended slightly up the leading edge of the rear wheel openings, and a dedicated full-width rear spoiler.

Buyers of 2011-to-2013 Z06 and Grand Sports could order RPO CFZ Carbon Fiber Package for $3,995. Product planners were also into cranking out Special Edition Corvettes. The 2009 ALMS GT1 Championship Special Edition Z06 sported the ZR1’s full-width rear spoiler. The 2011 Carbon Edition Z06 had the full compliment of ZR1 aero body parts. Even the 2013 427 Convertible could be ordered with the CFZ Carbon Fiber Package. 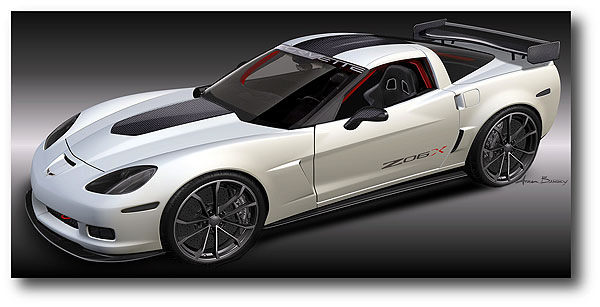 2010 Z06X Concept Car (Club Racer) – This might have been the seed of the C7 ZR1. Pratt & Miller used every performance option available and built an almost all-out, racecar with a full roll cage, lightweight polycarbonate windows, no sound-deadening material and more. The car was chock-full of racing gear. Most obvious was the large carbon fiber C6.R rear wing. This was the real-deal and not just an add-on feature. 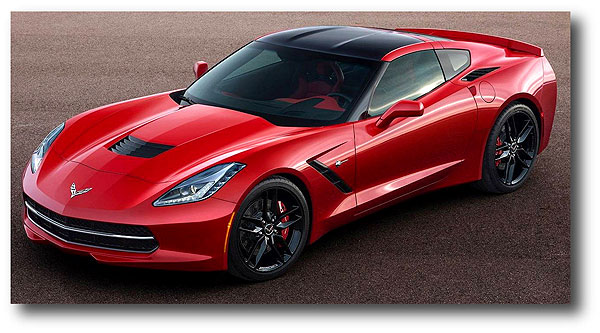 2014 C7 Base Model Corvette – The C7 Corvette looks like an extra-crispy, next level C6. Crisp bends and facets are back, so much so that it’s almost easy to miss the standard rear spoiler. With everything being so angular on the new C7, the car just wouldn’t “look right” without the rear spoiler. 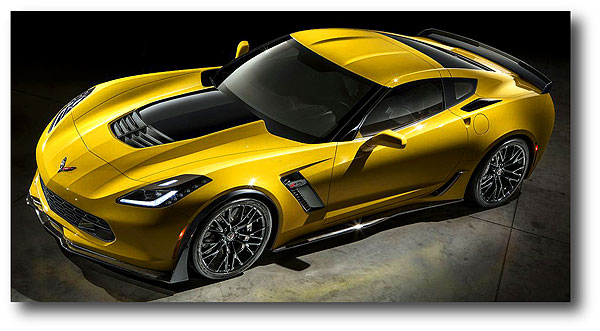 2015 Z06/Z07 – “Performance model” Corvettes have done a one-eighty since the olden days. Aside from a little fender badge, a C1 and C2 Fuelie looked just like a regular Corvette. Big-block Vettes had a unique hood, but there were different strength engines under the hood. The C4 ZR-1, is a jewel, but looks “almost” like a regular Corvette. Performance model Corvettes didn’t look the part until the 2001 Z06. The C6 Z06 looks like a bad-ass, and the C7 Z06’s appearance matches it capabilities. The ground effects of the basic Z06 stand way above the base model C7 and the Z07 performance option on top of the performance model Z06 goes even farther. The Z07 includes Brembo carbon ceramic brakes, Michelin Pilot Super Sport Cup tires, and adjustable front and rear aero components. Required with the Z07 is RPO CRZ, the Carbon Fiber Ground Effects, and includes front splitter side-spats and the transparent wickerbill rear spoiler. 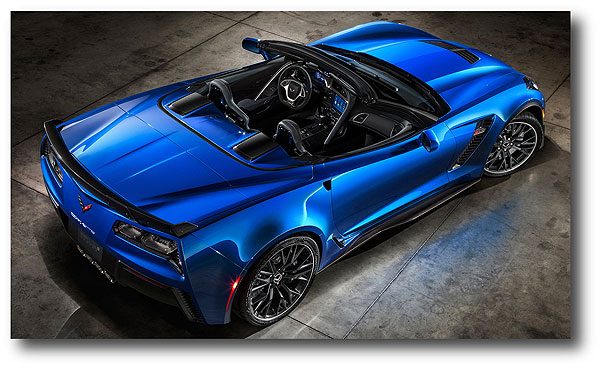 It’s been an amazing journey of mild-to-wild aerodynamic enhancements that have gone from simple bolt-on body parts, to integrated body aero systems, and soon, a computer-controlled Active Aero System. Duntov used to say, concerning his racing and prototype experiences, “What lessons have we learned?” The modern answer his classic question today would be, “More than you EVER imagined, Zora!” And Zora always liked “more”! – Scott