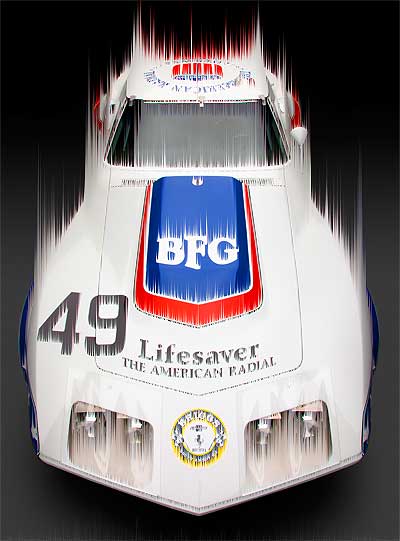 Well this was the first car auction I ever watched “live” online. I have to say that the interface on the RMAuctions.com was fall-off-a-log simple and played all the way through without a burp. The auctioneers were quite different from the local farm auctions where I’ve spend many a Wednesday evening. You could actually understand what the RM auctioneers are saying and they were so polite. Not that I was expecting an R-rated show, but it all was quite “proper.”

But a lot of fun just the same. And I appreciated how you got to see the cars rolled up on the turntable, so you got to see them from all angles. Plus they showed close-up interior, engine, and suspension photos. Most of the cars had been meticulously well maintained and restored. One 289 Cobra that had obviously been raced, had it’s original paint, minus a few scrapes here and there.  The auctioneer humorously quipped, “I just LOVE the patina on the original paint!”

The Greenwood #49 1969 427 ZL-1 B.F. Goodrich Corvette was the 44th car to go on the block. Most of cars 100 to 143 were “pushed” up and on to the turntable and those that were driven were so quiet you couldn’t tell if the engines were running. But as the Greenwood car was being introduced, there was THUNDER in the wings! They DROVE the open headered Corvette on to the turntable! When the ZL-1 was shut off, the auctioneer said, “It doesn’t get any cooler than that! 750-horsepower, ladies and gentlemen!” Corvette race cars SO ROCK!

Here are the five Corvettes that sold… END_OF_DOCUMENT_TOKEN_TO_BE_REPLACED