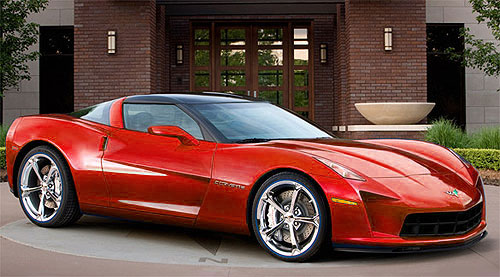 One of the fun parts about running a modern blog is that you can see the page view statistics for every post. In the 46 years that I’ve been following Corvettes, I have NEVER seen so much attention and excitement over an upcoming Corvette generation. My take on this is that it is mainly being driven by the proliferation of internet blogs and the speed we are able to post new information. Every time we post something about the C7, the hits take off.

Not that there’s anything inherently wrong or bad with the C6 Corvette. Quite to the contrary. The C6 Corvette has been developed into a top notch GT (Grand Touring) machine with more horsepower every dreamed of back in the ‘60s and ‘70s, an adjustable-from-the-driver’s-seat electronic suspension for track-level performance or highway cruising, launch-control, active braking, lush creature comfort, plenty of factory options to personalize your Vette, and enough honest storage space weekend trips for two!

Could you ask for more? SURE! And I’ll bet that’s exactly what Chevrolet has in store for us.

In an interview with Corvette chief designer Tom Peters in April 2011, he specifically said, “The Corvette Stingray Concept car is NOT the C7.”

The last scrap of red meat Chevrolet tossed to hungry Corvette fans was last May when it was announced that the C7 Corvette would likely be a 2014 model, with a possible release in Spring of ‘13. WOW! That’s less than a year away! What that tells me is that END_OF_DOCUMENT_TOKEN_TO_BE_REPLACED