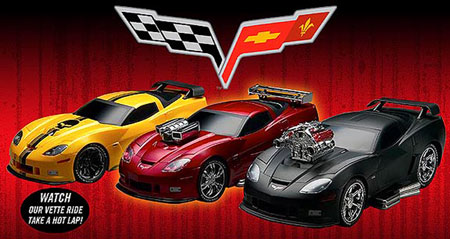 There’s a new toy car maker on the scene called RIDEMAKERZ, that offers a unique toy car experience for today’s fathers and sons with a driving passion for cars and Corvettes. The expression, “the difference between the men and the boys, is the price of the toys” has been around long before Corvettes arrived in ‘53. Sure, Corvettes are a blast to drive, but they aren’t terribly “useful” automobiles and fall closer to “toy” status. It wasn’t long after Chevy’s “plastic” sports car arrived that the toy versions starting showing up in stores. At first they were mostly crude die-cast, cast iron, and tin metal replicas – a far cry from the hot-looking RIDEMAKERZ toy cars of today.

As plastics caught on in the ‘50s, model kit companies flooded the market with styrene plastic kits of model airplanes, boats, ships, and yes, cars. The model kit companies formed a close relationship with car makers and by the mid-’60s, some car kits were released along with new cars. While Matchbox was making vintage and European cars, Hot Wheels began to popularize muscle cars, race cars, and Corvettes in die-cast.

Two developments in the toy industry occurred in the late ‘80s that are still being felt today. As tool and die manufacturers in China started to gain proficiency, we saw  $100-plus, pre-assembled die-cast cars with details that rivaled the more difficult plastic kits. Second, was the introduction of toy-grade radio controlled cars and trucks from Taiyo, Tyco, Nikko, and others, with prices under $100. These advances can be directly seen in the RIDEMAKERZ toy line, as you’ll see later in this story.

Then a new player arrived that had a profound effect on boy’s toy cars. Build-A-Bear Workshop took the traditional teddy bear to a new level in 1997. CEO and founder Maxine Clark created a chain of stores that invited girls to come in and create their own customized teddy bear. Original ideas are very hard to come by in the toy business. It wasn’t long before Clark was swamped with all sorts of “build-a” toy ideas. She had even outlined her own “build-a-car” line, but was busy making teddy bears. END_OF_DOCUMENT_TOKEN_TO_BE_REPLACED