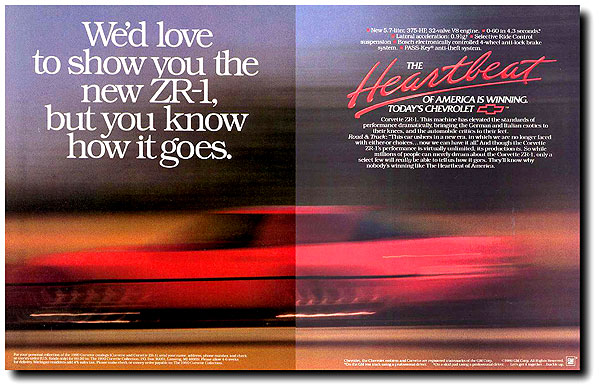 Dateline: 8.11.17 – Photos: GM Archives, Michael Beal, Illustrations: K. Scott Teeters – There’s an unwritten, unofficial “Law of the Jungle” that basically states, “If you are at the top of the food chain, you might not be there for long.” Such was the case for the C4 ZR-1 Corvette, for a little while. The C4 ZR-1 had a six-year production run with only 7,018 units produced. The ZR-1’s head-exploding price was the biggest limiting factor. The crummy economy in the early ‘90s didn’t help, and the much-rumored, all-new C5 no doubt was a drag on the ZR-1’s sales. And then there was also that pesky Dodge Viper. The 427 Cobra’s “Marley’s Ghost” was obvious, only this time disguised as a Dodge,

While armchair quarterbacking is easy and hindsight is 20/20, it is worth asking the question, why wasn’t such an awesome car more successful? “Timing” aside, the ZR-1’s aesthetics was a big factor. Stated simply: When viewed by itself, the C4 ZR-1s look like “regular” Corvettes. As an illustrator and stylist, I find it astonishing that Chevrolet would have done this, after all the engineering work that went into the ZR-1. 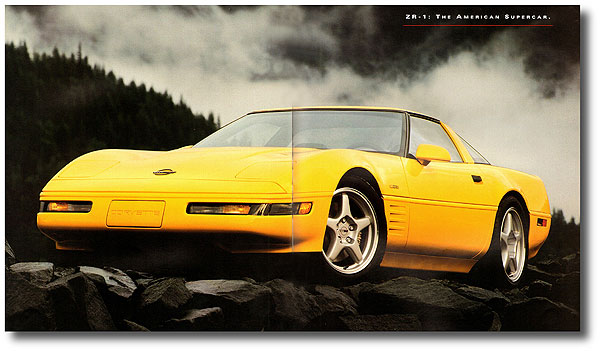 The body panels from the doors all the way back to the rear bumper cover, are unique to the ZR-1 – made wider to cover the widest tires put under a factory-built Corvette body, to that point. This means that the panels had to be redesigned. But rather than make them visually unique, the Corvette stylists were commanded to imitate the basic design of the standard Corvette, with one exception   – the shape of the taillights.

Ever since the final refresh of the 1961-1962 Corvette, the car has had two clusters of two “round” taillights. While the 1990-1995 ZR-1 still had two clusters of two taillights, the shape was essentially square with rounded corners. What Chevrolet did a year after the ZR-1 was introduced was astounding – they re-styled the regular Corvette’s taillights exactly the same as the ZR-1’s taillights! The ZR-1 wasn’t especially unique-looking to begin with. Making the standard car’s taillights the same as the performance model’s taillights diluted the ZR-1’s uniqueness, forcing fans to look for the “ZR-1” badge on the right side of the rear bumper cover.

To Chevrolet’s credit (better late than never), 1994 and 1995 ZR-1s wore dedicated five-spoke mag-style wheels that were not available of the base model Corvettes. Now the ZR-1 had a point of differentiation from the stock models. The same wheel/tire combo would later be used on the 1996 Grand Sport. The 1996 Collector Edition option had ZR-1-styled wheels, in the stock rim size. 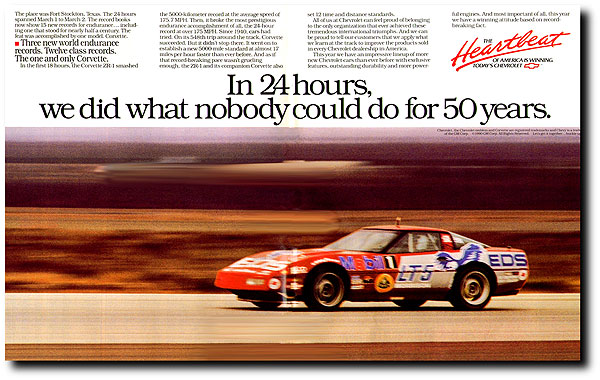 It certainly seemed as if Chevrolet went out of their way to subdue the visuals of the ZR-1. What could they have done? Lots! The 5-spoke mag-style wheels should have been on the first 1990 ZR-1s. Chevy already had a cool-looking four vertical-slot set of fender vents and hood vents from the GTO body kit available through the Chevrolet Performance Parts catalog. The C4 GTO kit was available through the Chevrolet Performance Parts catalog, as an “end-around” so that the GTO racers could have a production option to make their “facility” racecar body. The racer styling cues from the body kit could have been incorporated into the body parts that were already being modified.

As juicy as the ZR-1’s hardware was, the visuals fell way short. After all, if you are going to offer a super performance model that cost nearly double that of the base Corvette, it should look the part. This lesson was obviously not lost when it came time to design the looks of the C6 ZR1. You can spot a C6 ZR1 from any angle in a heartbeat! I can almost hear the C4 ZR-1 saying, “Don’t hate me because I don’t have supermodel hottie good looks.” 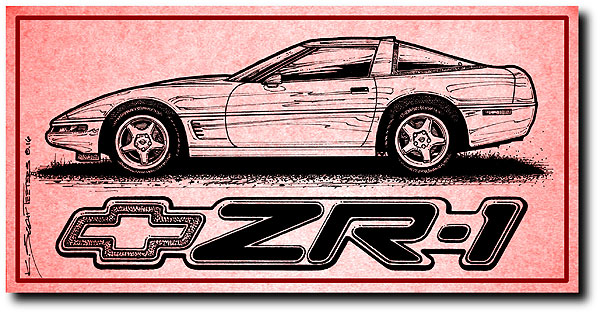 So, lets get into the basics. Buckle your 5-point harness as we get into the Vette Vues Time Machine and set the dials to 1990!

Chevrolet milked the automotive press and stoked Corvette fans for nearly two years with rumors and sneak-peeks of the ZR-1 Corvette! This was obviously pre-Internet, so all the stoking was done the old-fashioned way, via paper magazines. This was to be the biggest power increase since the introduction of the big-block engine in 1965 and the first time there was an optional engine since the last big-block in ‘74. But unlike the 1974 $250 optional LS4 454 engine, the LT-5-powered ZR-1 was a total-car package deal that cost a thunderous $27,016 ON TOP OF the $31,979 base Corvette!

The ZR-1 conversion was much more involved than simply dropping a larger engine under the hood. The biggest challenge had to do with assembly-line production. The original idea was to have a set of double-overhead-cam heads made that would replace the stock L98 heads. But it was soon discovered that the extra width from the new heads made it impossible to install the engine using the assembly-line jigs. Changing the assembly line or the frame was not an option. Lucky for Corvette fans, the decision was made to have a completely new engine developed. 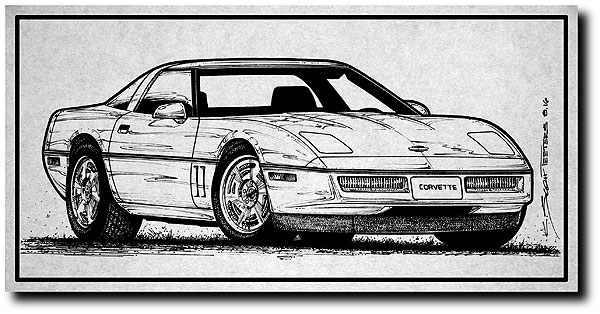 Since GM owned Lotus, work began in May ‘85 by Lotus engineers to design a new engine for a “Super-Corvette.” The C4 had only been in production a little more than two years and Chief Engineer Dave McLellan started the ZR-1 project. So kudos to McLellan and his team. The new engine would be designed to fit into the Corvette assembly line, but the overall package would be far from cheap. Unlike the Cosworth Vega’s DOHC bolt-on cylinder head, the new LT5 was a fresh start.

The introduction was delayed because Chevrolet wanted to get it right. It was worth the wait, the finished product was stunning. The standard L98 Corvette engine had 245-hp, the ZR-1 packed 375 hp – a 130-horsepower jump! The engine had four overhead-cam shafts and 32 valves. The heads used a fast-burn cloverleaf design with centrally located spark plugs. The intake manifold had 16-runner inlets and two Multec injectors per cylinder. It had a direct-fire ignition with camshaft sensors and used 12 quarts of oil. Even though the engine was all-aluminum, because to the engine’s complex design, an assembled LT5 weighed almost 40-lbs more than the standard cast-iron block/aluminum head L98. Regardless, the ZR-1 is a jewel of an engine.

To handle the extra power, special 315/35 ZR17 Goodyear Z-rated tires were mounted to 11-inch wide rear rims. To cover the larger tires, new, wider body panels were made to replace the stock doors, rear fenders, rear fascia, and upper rear panel. The taillights were square-like with rounded corners, and the exhaust tips were rectangular. All of the Z51 suspension and brake parts were standard. 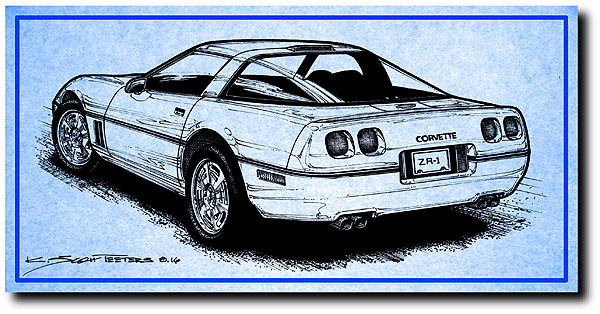 Several factors contributed to the low sales. It all came down to trying to sell a very expensive car into a very sluggish market, dragged down by a recession. By 1992, not only did the base Corvette look almost the same as the ZR-1, the new 300-horsepower LT1 engine brought the performance of the base car almost to the same level as the ZR-1.

By 1993, thanks to improved cylinder heads, valve train improvements, and other small changes, horsepower was bumped up to 405 – a mind-blowing level in 1993. But for those with deep pockets and a powerful longing for “King of the Hill” bragging rights, it was all worth the price. Regardless, the ZR-1 was an instant Corvette legend.

It was a long, long stretch from the end of 1995 when the last C4 ZR-1 was built to 2009 when the ZR1 came roaring back to life, packing 638-horsepower, with a restricted top speed of 205-mph! The supercharged LS9 engine could have taken the car to even higher speeds, but engineers were concerned about the ZR1’s ultra-high speed stability. Thanks to the spectacular performance and appearance of the C5 and C6 Z06, the C4 ZR-1’s star quickly faded. 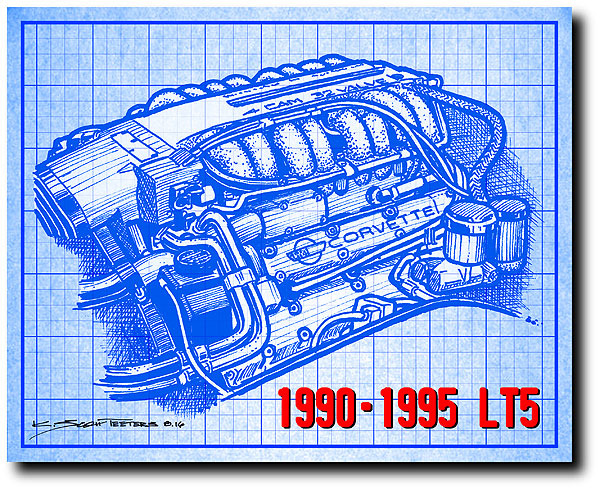 To put some context into the C4/C6 ZR-1/ZR1 comparison, consider this. On March 1 and 2, 1990, Morrison Motorsports blasted a 50-year old, 24-hour average speed record with an almost-stock ZR-1. The car was race-prepared with a roll cage, Dymag lightweight wheels shod with Goodyear Racing Eagle tires, safety equipment, an EDS telemetry system, a 45-gallon fuel cell, and 300-pounds of spare parts in two suit cases lashed to the rear roll bar supports. As per FIA rules, speed record cars must carry “non-consumable” spare parts in the event of a breakdown and the driver isn’t able to get back to the pits.

With all that, the Morrison ZR-1 set an AVERAGE 24-hour speed of 175.885-mph! In 24 hours the car had ONE minor repair and set three world records. After breaking the records, just for fun, Tommy Morrison took a two-lay victory run at FULL THROTTLE! How do you like that? 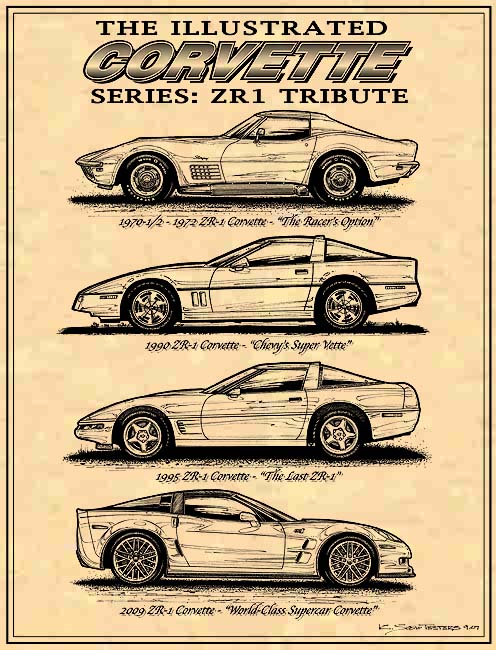 Early C4 Corvettes are pretty much at the bottom of the barrel as far as prices are concerned. Because subsequent C5 and C6 Corvettes offer so much more raw performance potential, I have seen C4 ZR-1 Corvettes at auction sell as low as $14,500! No kidding, look it up in a Google search for “mecum ZR-1 Corvette.”

The higher selling prices (in the high $20,000s and low $30,000s) typically are cars with extremely low mileage. And probably because the production numbers were so low over the car’s six-year run, very few C4 ZR-1s are seriously modified.

One brilliant example of a beautifully modified ZR-1 can be seen on pages 46 to 60 of the February 2012 issue of Vette Vues. This was possibly the only roadster version of a stock-ish ZR-1. The car was owned by Michael Beal at the time, and was professionally built. The build is so good, the car can pass as a factory ZR-1 roadster.

Then there were the six ZR-1-based “GS90” cars offered by Corvette racing legend, Dick Guldstrand. These were total body kit cars with a ton of bodywork labor cost, accounting for the $206,208 price tag. That’s why only six were made! For the most part, when it comes to cutting up C4 ZR-1s, it’s pretty much “YO! Hands-off! Fugetaboutit!”

Yes, C4 ZR-1s have a unique place in Corvette history. That’s why most of the major Corvette shows often have a “ZR-1 Coral” where all the ZR-1s and their owners can gather together, pop their hoods and say, “So, there!” – Scott

We have a collection of C4 and C6 ZR-1 and ZR1 Corvette, and LT5 and LS9 engine art prints HERE. 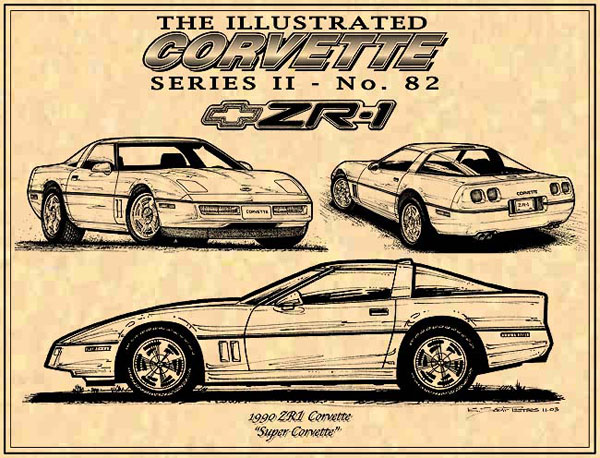 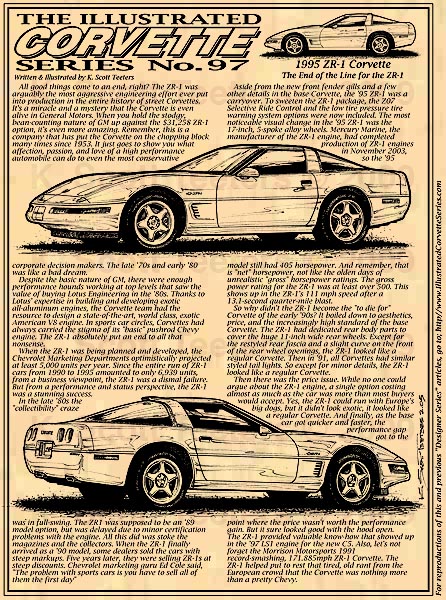 We also have BIG prints in out Fine Art America site in sizes from 8-inches by 8-inches, all the way up to 48-inches by 48-inches! Check’m out HERE! 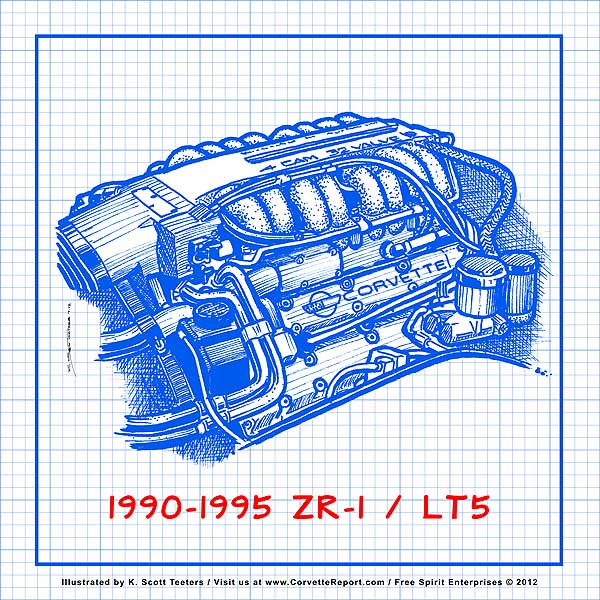