Dateline: 7.22.15 The lineage runs like this. In 1957 Chevrolet’s new general manager, Ed Cole (the engineer credited with the design of the small-block Chevy engine – the greatest, longest-in-production engine in Detroit history) decided that by 1960 ALL General Motors cars would use a transaxle to improve weight distribution, handling, and to open up interiors for more space. It was call the “Q-Chevrolets” and yes, there was to even be a Q-Corvette.

Young designer Peter Brock came up with a concept sketch that delighted styling chief, Bill Mitchell. A scale model, then a full-size clay model were created for review. One glance at the Q-Corvette and there’s no denial – it’s a prehistoric Sting Ray. Unfortunately for the Q-Corvette, the entire Q-Chevrolet collapsed on the weight of the tooling cost of the transaxles, so Peter Brock and Bob Veryzer’s Q-Corvette was dead in the water. But not for long… 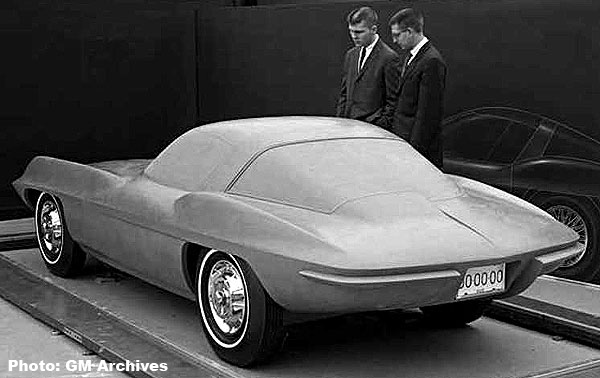 A year or so later, Mitchell, flush with money as the new VP of Design for General Motors, decided he wanted to go racing. Bill pulled strings and bought the mule chassis (for either $1 or $10, story accounts vary) from Duntov’s aborted Corvette SS project and drafted his new favorite designer, Larry Shinoda to create a body for the chassis, using the basic lines of the Q-Corvette. The car was initially to be a coupe, but making a one-off coupe was extra work and Mitchell wanted to get racing sooner, rather than later, so the body was created as a roadster. The Stingray Racer was like NOTHING else out there in 1959 and 1960, and just “had-to-be” the next Corvette.

Shinoda was charged with taking the Stingray Racer and making it into a production car, as roadster AND coupe. While Peter Brock’s original sketches and the Brock/Veryzer Q-Corvette was indeed a fastback, it did not have the now iconic “Sting Ray” coupe roof with the split window. So, where did Larry Shinoda come up with the design? Was it purely out of Larry’s own very capable imagination? Or was he inspired by something he’s seen. Unfortunately, Larry is no longer with us and to the best of my knowledge; he didn’t leave any design notes about the Sting Ray’s unique roof.

So, on July 20, 2015 when blog.hemmings.com published a story about the 1938 Adler Trumpf Rennlimousine, Corvette fans were in for a surprise! While the car indeed looks large and doesn’t have the look of a “sports car” it was actually raced at Le Mans in 1937, and approximately six were built. While this was in its day, cutting edge and a truly advanced design, from the front and size view, no one would EVER think, “Sting Ray.” But when you get to the rear roofline, it’s, “Oh… My… God!!!” While not “exact” with the sharp, tapered point, split rear-window, and taillight configuration, the resemblance to the 1963 Split-Window Coupe Sting Ray is stunning!

Did Larry Shinoda see this very obscure pre-war German race car somewhere in his formative years and said to himself, “That roofline is really cool!”? We’ll never know for sure. And that’s why the 1938 Adler Trumpf Rennlimousine is now part of CorvetteReport.com’s “Corvette Odd-Ball”! – Scott

PS – And perhaps someone at Ford was looking at the Adler Trumpf Rennlimousine. Note the Thunderbird badge under the rear window. 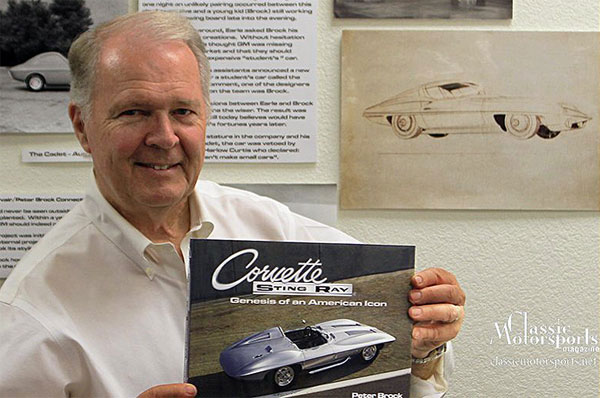