Dateline: 7.21.15 “Corvette Mike” of Anaheim, California, the car dealer that ONLY sells used, refurbished, and restored Corvettes, produced this beautiful video of the stunning 1956 SR-2 Corvette Racer. I covered this car in Part 2 of my Vette Magazine “Corvette Experimental, Prototype, Concept, and Show Car Corvettes” series that ran in the December 2014 issue. That article is republished in its entirety at the bottom of this post.

This car went through numerous iterations. I illustrated the car in one of its red version, but as the car exists today, (as seen in the video) is is brilliant blue. On one version of the SR-2, the car had bullet headlight covers, a single enclosed clear canopy over the driver (pilot?), and dragster-style zoomy headers!

Special thanks to Corvette Mike.

Below is my brief story.  WILD times! 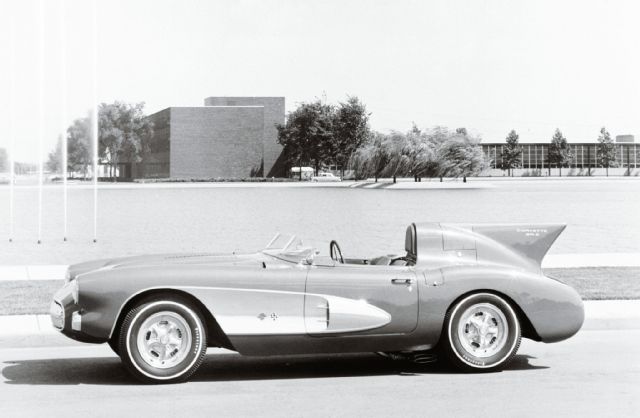 The ’56 Corvette was so well received that GM executives decided to indulge themselves with special racer versions of the Corvette. Harley Earl’s son Jerry wanted to race a Ferrari, but Harley said, “No way!” So he offered to have a hot Corvette built for his son, and by June, Jerry had his Corvette racer.

Ultimately, three SR-2 Corvettes were built. The nose of Jerry’s SR-2 was extended and the car had scoops on the doors, twin cut-down windscreens, and a short fin mounted in the center of the trunk lid. The interior had extra instruments, power windows, stock seats, a fire extinguisher, a wood-trimmed steering wheel, and a radio. Power came from a stock 265, dual-quad engine with exhausts exiting just in front of the rear wheels.

Bill Mitchell, upon learning of Jerry’s car, wanted his own SR-2 – only better. From the outside, the most obvious difference was the much taller fin mounted behind the driver. Also, Bill’s SR-2 was 3 inches wider and the body was hand-laid, lightweight fiberglass, and had a 45-gallon gas tank. The doors were gutted and the handles were replaced with pull-cords. The interior had full carpeting, and a steering column-mounted tachometer.

A third SR-2 was a custom cruiser built for GM’s president, Harlow Curtice. It had the low center fin, extended nose, and a louvered hood, similar to the Sebring racing Corvettes. Other special touches included blue leather seats, whitewall tires on Dayton wire wheels, and a special stainless steel removable top. Curtice’s SR-2 cost $50,000 to build in 1956. A year later, he sold the car to a neighbor.

The entire SR-2 adventure only lasted a year and a half. During that time all three SR-2s were retrofitted with 283 fuelie engines and four-speed transmissions. Jerry Earl’s SR-2 was way too heavy and was treated with some serious weight reduction. Mitchell and Earl’s SR-2s both saw real racing action. All three SR-2 Corvettes were bought and sold many times, and are still around.

POSTSCRIPT: I’ve always felt that the SR-2 would have made a very nice evolution of the ’56-’57 Corvette – minus the headrest and rear fin. The extended nose and door scoops were a nice addition. It’s too bad that the SR-2 wasn’t made into a separate model, similar to the C5 and C6 Z06. It could have been called the “Corvette Sebring” and equipped with the unique SR-2 inspired body, the 283 Fuelie, low restriction mufflers with side-exit exhaust, the racing suspension, and Halibrand wheels. Hmmm. It could’a been so cool… – Scott