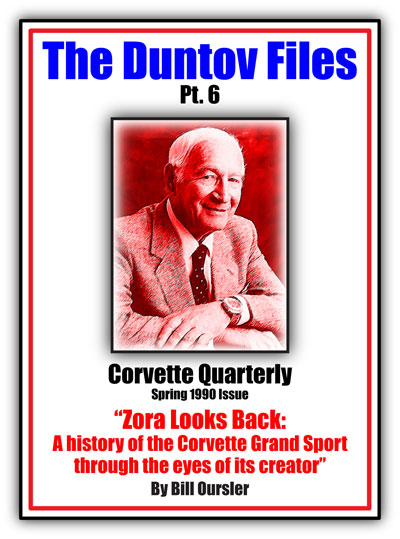 The Godfather of HOT Corvettes had some SHOCKING things to say about the beloved Grand Sport Corvette!

The Spring 1990 issue of “Corvette Quarterly” was a banner issue for 1963 Corvette Grand Sport fans. Late in 1989 arrangements were made for a very special meeting at Sebring International Raceway, in Sebring, Florida. Two Corvette race cars, separated by twenty-five years gathered for some comparison testing between the Grand Sport #002, known as the “Wintersteen 427 L88” Grand Sport #002 Roadster and the 1989-90 Morrison Engineering and Development Trans-Am Corvette.

On hand to witness and advise was then-retired, former Corvette Chief of Engineering, Zora Arkus-Duntov. In the 1970s GM’s corporate retirement age of 65 mandate was in place, and Duntov was put out to pasture, way too soon in December 1974 when he turned 65. GM president Ed Cole and Sr. VP of Styling, Bill Mitchell faced similar fates at GM. You can read the amazing track comparison of the Grand Sport and the Trans-Am Corvette in Pt. 4 of The Duntov Files.

This story, “Zora Looks Back” offers some interesting insights into Duntov’s tenure at GM, as well as the “Lightweight Grand Sport Corvette” experience. For instance, Duntov said, “It was a quick and dirty sledgehammer project that we put together in a couple of months. There were so many compromises and constraints that we made something of which I am not particularly proud.” Interesting. Well, we sure love them!

Duntov was there, this was his baby, and he would know the real skinny on the Grand Sport. For Grand Sport race car fans, this article by Bill Oursler is a real treat! – Scott

PS – You can access the entire collection of Corvette E-Booklets and the Duntov Files HERE.