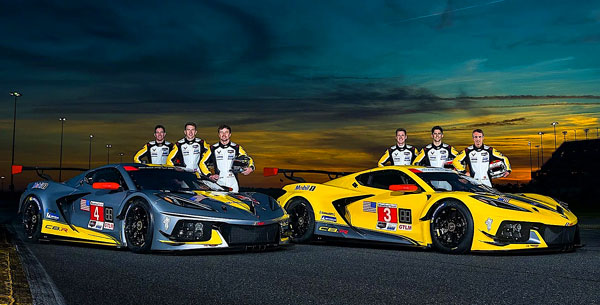 Is Racing “Entertainment”? Or, is it a Study in Automotive Engineering, Time Management, and Human Endeavor?

Dateline 12.11.20 – Mike Waal has gasoline in his veins when it comes to Corvettes and Corvette Racing. Mike follows the Corvette Racing Team and e-mail publishes qualifying results and hourly race reports. Mike and I have spent hours talking/griping about the arbitrary nature of IMSA’s BoP system and how it is the antithesis of what IMSA racing was in the 1970s when if a team had a better, faster car, you just had to work harder. The odd 2020 racing season is over and BRAVO to the Corvette Racing Team, another Championship, and achieved with a new car! Mike has some interesting thoughts about what is being passed off as “racing” today. Hit the gas, Mike! – Scott

Everyone appreciates the immense efforts by the Pratt&Miller C8.R Corvette and the Callaway Competition C7 GT3 Corvette Racing Teams. Albeit, it was a strange and challenging year in many ways for IMSA & ADAC organization management as well. We express our sincere Congratulations to both teams and organizations. And, we all look forward to a less stressful 2021 season for all.

Since we just experienced the 2020 season’s ending races in IMSA and ADAC, a few of you have sent Thank You notes for the Race Updates; truly not necessary. In truth, I thank you for putting up with my numerous Race Update emails. I truly enjoy sharing the Corvette racing experience.

Some, especially in racing organization management, look at racing as ‘entertainment.’ I do not. Never have. If I/we want entertainment we go to the movies, or, nowadays, watch a movie at home. I believe, truly, we fans and enthusiasts of racing look at racing as a ‘study in automotive engineering, time management, and human endeavor.’ Especially the enduro races; Daytona/LeMans-24s, Sebring-12, Rd Atl Petite LeMans-10, and Watkins Glen-6.

Who among us doesn’t think about all of the rotating parts and pieces of a race car when we watch a race; the constantly changing engine revs, the numbers of transmission shifts, the glow of brake rotors, and the strategies playing out? Especially when we watch thru the eye of the In-Car-Cam, seeing what drivers see and experience, albeit with the lack of accelerating, braking, and centripetal forces acting upon us.

Just a thought, but I believe true race fans and enthusiasts, like us, understand what is going on in every race. We try to figure out race strategies, calculate time, or laps, between or until the next pit stop, and we think about ‘can they make it to the end!’ Entertainment? I think not. We are ‘engaged’ racing fans and enthusiasts.

I talk about the technical aspects of racing during some of my Race Report presentations at club meetings. Not computer technology, but the mechanical technology. Ya know, 6000RPMs expressed in seconds is 100Revs/Second. Wrap your head around that for a ….. second! 1 rotation of a crankshaft in 1/100 of a second. During that 1 rotation, 1/100 of a second, 4 explosions have taken place in 4 cylinders, creating kinetic energy that motivates a car; 400 explosions in a second. I’m amazed at NASCAR engines that now rev to 9000RPMs, 150 Rev/Second, 600 explosions/second. I remember when 7000RPM was cutting edge.

A lot going on in that small-block racing engine that the mind’s eye can and does create images of, in addition to that crankshaft turning; camshaft spinning, push rods pushing, rocker arms rocking, valves opening/closing, springs compressing, so much can, and sometimes does, go wrong, in nanoseconds.

During an enduro race, like the Watkins Glen 6hr, just as an example, with 14 turns, and let’s just say on-average 2-downshifts then 2 up-shifts per corner, that tranny will see over 10,000 shifts in a race at a stressing race-competitive-pace. The design, engineering, metallurgy that goes into racing engines, transmissions, and transaxles, wheel bearing and spindles, shocks and springs, suspension components. Oh. Yea. And tires, being the retired tire and rubber guy. The average tire rotates at 13 rev/sec at 60 mph, that’s 26r/s @ 120mph, 39 @ 180, 45+ @ 210. Holy Kryptonite! Well, it’s all mechanically fascinating, isn’t it. Doesn’t sound or look like ‘entertainment’, does it?

Looking forward to a successful 2021 racing season for Callaway and Pratt&Miller in ADAC and IMSA, with hopefully more competitors in GTLM, although it doesn’t look promising, and my best wishes expressed for all to enjoy Thankful Thanksgiving, Blessed Christmas, and Joyous New Year Celebrations.

C u all in January,
Mike