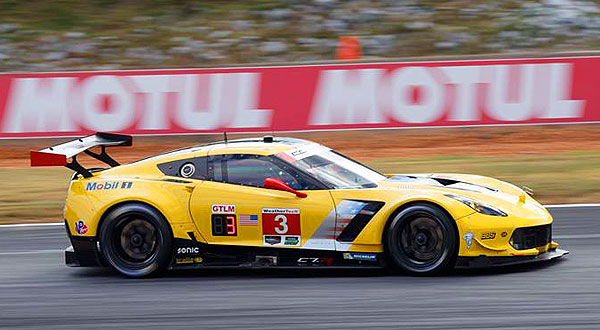 The Chevrolet-backed Corvette Racing Team starts its 20th racing season this month and has consistently raced longer than any other team in IMSA history. But it all started today in 1999! Dateline: 1.10.18, Images: AutoWeek & illustration by K. Scott Teeters – Now that the holidays are behind us, it’s time to get focused on… Read More

Pratt & Miller Builds One Hell-of-a Corvette Race Car! Dateline: 8.15.15 / Story by Jan Hyde, www. RegistryofCorvetteRaceCars.com VIDEO at the bottom of this post! A story about the # 4 Pratt & Miller C5R-006 that we Corvette race car enthusiasts hope might inspire more collectors to share the rewards by taking their cars for… Read More

Good guys shine and Ron Fellows has become one of the most popular race car drivers of our time. Ron’s a great example of starting our small – kart racing small, in fact. Kart racing lead to Formula Ford 1600 and Formula Ford 2000 cars. Ron launched his professional driving career in the 1986 Player’s GM Challenge, racing a showroom stock Camaro. Trans-Am racing followed and by ‘89 Ron was one of the most successful drivers in Trans-Am history, winning 19 of 95 starts.

When the C5-R Corvette Racing team was being assembled in ‘98, Fellows was one of “the” drivers to hire. When looking back on a successful long term career, it often appears easy, but this was far from the case. It was a long, hard battle for the Corvette Racing Team from ‘98 to the 2001 GTS Le Mans win.

Ron lives in Toranado, Canada with his wife and three children, is a passionate about hockey and the Toranado Maple Leafs and fellow Canadian, Neil Young. HAPPY 52nd BIRTHDAY, Ron! And many more! Read More

After decades of “why can’t we have a factory Corvette racing team?” Chevrolet and GM finally got behind a racing Corvette in ‘97, the way they did with NASCAR Chevrolets. With the vastly superior C5 platform, Chevrolet and Pratt & Miller engineers took their time developing all aspects of the C5-R. The results were SPECTACULAR! Read More

According to Chronology of Chevrolet Corvette website, it was sometime in 1997 that the Corvette Racing Team began developing the C5-R race car, based on a production C5 Corvette. C5-R chassis testing began in November ‘97 with the first completed C5-R race car ready in early ‘98. After nearly a year of testing and development, the C5-R’s first competition was at Daytona International Speedway on January 10, 1999. After 24 hours of competition, the C5-Rs came in 2nd and 12th in the GT2 class. Not too shabby for an all-new race car and team. Read More

To celebrate the success of the C5-R Corvettes, Chevrolet offered the Commemorative Edition option on all ’04 Corvettes – coupes, convertibles, and the Z06. The paint scheme and stripes were taken from the ‘04 C5-R cars and included every performance and luxury option available. This was a $3,700 option for the coupe and convertible, and a $4,335 option on the Z06. A total of 6,899 units were built, accounting for 20-percent of all ’04 Vettes. Read More

Keep in mind that our criteria for this book is, “Vettes Made Famous On Track And Screen.” After I had that settled in my head, everything was fine. Our visual trip begins at the beginning – the 1953 Corvette. The images draw out the inherent beauty of the car. It was just too good-looking to give up on, by a few very important people. That’s where Leffingwell’s prose lays out the stories. Read More