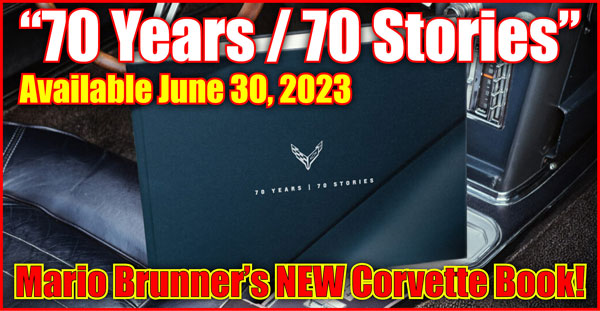 Corvette Man, Mario Brunner from Germany’s new 70th Anniversary book to be out by June 2023!

I met Corvette Man, Mario Brunner in December 2020 through Vette Vues Magazine. The magazine regularly gets requests from readers to publish stories about their Corvettes. Editor Bonnie Wolf sends me the photos the owners sent to her and their contact information. I reach out to the owners, interview them to get their stories, and work with the photos they send to me. These are what I call, “Reader’s Rides” stories and they’re a lot of fun for me to write. 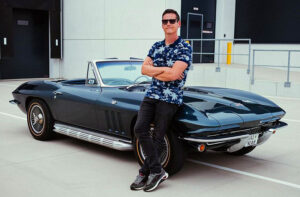 Mario grew up in the small German village of Enzweihingen, just northeast of Stuttgart in southern German. His home was close to the Porsche factory and museum in Stuttgart, Germany. Mario’s Dad was into American muscle cars, hot rods, and motorcycles; so it’s no surprise where Mario’s passion for cars came from. After his Dad passed, Mario’s Mom suggested that he get the car of his dreams because that’s what his Dad would have wanted.

Mario Finds a Sweetheart of a Corvette!

For years, Mario felt that the Corvette was the ultimate American muscle machine. Corvettes are outstanding sports cars with muscle car grunt and thunder. C2 Sting Rays were Mario’s favorite generation (mine too!), so he started looking for something Sting Ray sweet. 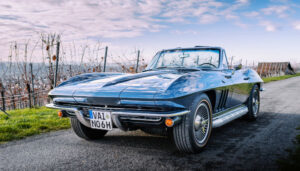 One day while scanning Facebook-Colorado for Corvettes, Mario found his dream Vette. Everyone’s “dream Vette” is special to them, but Mario’s find was a loaded small-block 1966 Sting Ray Convertible “Pilot Line Car”. These are pre-production cars built for evaluation and to be used for magazine testing. Afterward, Pilot Cars are sold through Chevy dealers as “Used Cars”. Each year, perhaps a dozen or two are produced, making them unique.

I covered Mario’s ’66 Corvette Convertible for the February 2021 issue of Vette Vues and later published the story here on Corvette Report. You can read the story HERE. 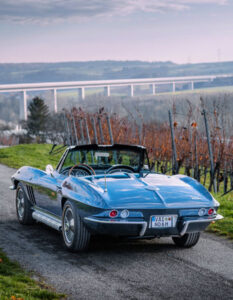 In September 2021 Mario contacted me to let me know about his new book project. The book release will coincide with the Corvette’s 70th Anniversary coming up on June 30, 2023. Mario works in Marketing and is an excellent wedding and automotive photographer. He has, what I call, “The Artist’s Eye” when it comes to photography. His attention to composition and light is outstanding. Mario’s photographs are NOT “snapshots”.

The other thing Mario had to tell me about was that he was coming to America, would be in Florida, and could we get together. Our time was short, just an afternoon, so we couldn’t go too far from Sebring International Raceway where he was staying at the Seven Hotel next to the track 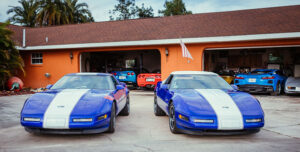 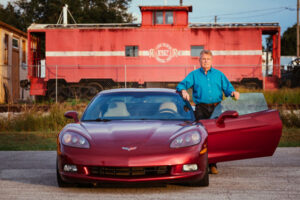 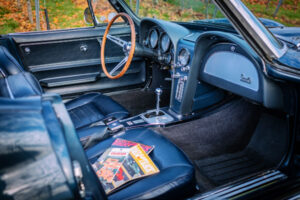 The purpose of Mario’s visit to America was to travel the country and photograph interesting Corvettes that are owned by everyday people. “70 Years / 70 Stories” will feature Corvettes and owners from Europe and America. Mario made a second visit to America in 2022.

Former Corvette Chief of Engineering, Dave Hill, once said in an interview that his team of designers and engineers are fully aware that what they are working on isn’t just “transportation”. “Corvettes change people’s social lives”, Hill said. Mario’s beautifully photographed book will provide seventy examples of what Corvette means to owners. 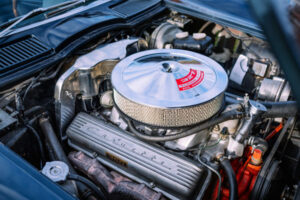 When I write my “Reader’s Rides” stories for Vette Views, it only takes a few minutes into the interview for us to be two Corvette pals, talk’n and bench race’n about Corvettes. I’m looking forward to the stories and photographs in Mario’s book!

So, stop by Mario’s website… https://www.mariobrunner.com/corvette-usa/ and get on his e-mail list for updates on the book. He has a beautiful collection of images that will give you a taste of what a beautiful book this will be. – Scott