While it’s NOT the C7 Corvette, the Stingray Concept is one of the most exciting Corvette concept cars ever made. 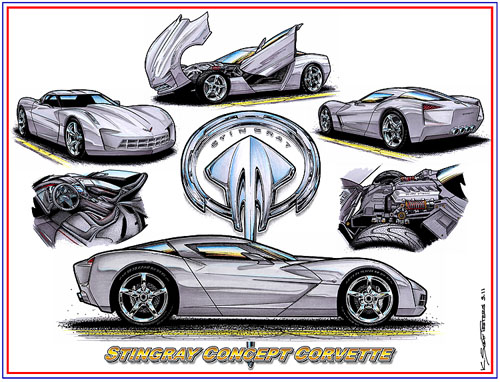 In the August 2011 issue of VETTE Magazine my Illustrated Corvette Series No. 170 column covers the beautiful and popular Corvette Stingray Concept Car. After pulling a few strings and several phone calls, I had the good fortune of having a delightful phone conversation of Corvette Chief of Styling, Tom Peters.

Before I go any farther, I must say that Peters is on record stating, “The Corvette Stingray Concept is NOT the C7.” Several years ago, Tom and his team of designers wanted to explore some traditional and new styling themes, just for fun. The Corvette Stingray Concept was the finished effort and judging from the response from crowds at the car shows, I’d say the car is a home run hit. So KUDOS to Tom Peters and his team of super talented designers. END_OF_DOCUMENT_TOKEN_TO_BE_REPLACED