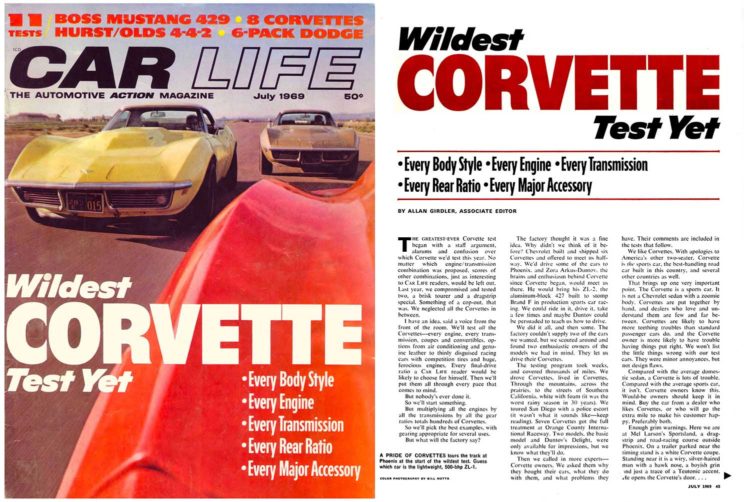 “Car Life” magazine went out of publication by the end of the 1960s. The July 1969 issue screamed “CORVETTE!” with the cover story, “Wildest CORVETTE Test Yet – Every Body Style, Every Engine, Every Transmission, Every Rear Ratio, Every Major Accessory”. The cover story was a 16-page; mother-load of 1969 Corvette information covering everything from the ZQ3 350/300 small-block to the mighty ZL-1 all-aluminum 427 that powered Zora’s latest mule Corvette for suspension, drive-train, and brakes “testing”. Read More

To understand the importance and uniqueness of George Haddad’s 1969 ZL-1 Corvette, we have to get into the “Vette Vues Time Machine” and go back to late 1968. The December 1968 issue of Hot Rod Magazine hit the newsstands like a thunder clap, with an obviously all-aluminum big-block 427 Corvette engine wearing bright yellow tube headers. It looked like Chevrolet finally had an ace trump card. The 427 ZL-1 was the ultimate “pie-in-the-sky” Corvette setup – big-block horsepower and torque – with the weight of an iron small-block! Duntov was a happy man because his dream of an all-aluminum engine for the Corvette went all the way back to the 1957 Q-Corvette concept that not only called for a fuel-injected all-aluminum small-block engine, but a trans-axle! (Sounds like a C5, doesn’t it?) Read More

Twenty-three years ago today at of all places, The Kennedy Space Center in Florida, Roger Judski, owner of Judski’s Corvette Center in Maitland, Florida became the owner of what is arguably the rarest of all high performance Corvettes, a 1969 ZL-1 Corvette. When this car was announced to the world in the fall of 1968 as an option on the ’69 Corvette, it became an instant legend for numerous reasons. Judski paid what was then considered a stunningly HUGE amount of money for the ZL-1, $300,000! Roger had been trying to buy the ZL-1 for 12 years. Read More

Dateline: 10.30.11 Here’s the latest installment from the Illustrated Corvette Series VETTE Magazine Column (Check out the Greenwood video at the bottom of this post!) It was early last July that Kevin Mackay of Corvette Repair sent me a link to the RM Auctions online version of their Monterey Auction Catalog. Kevin and I have… Read More